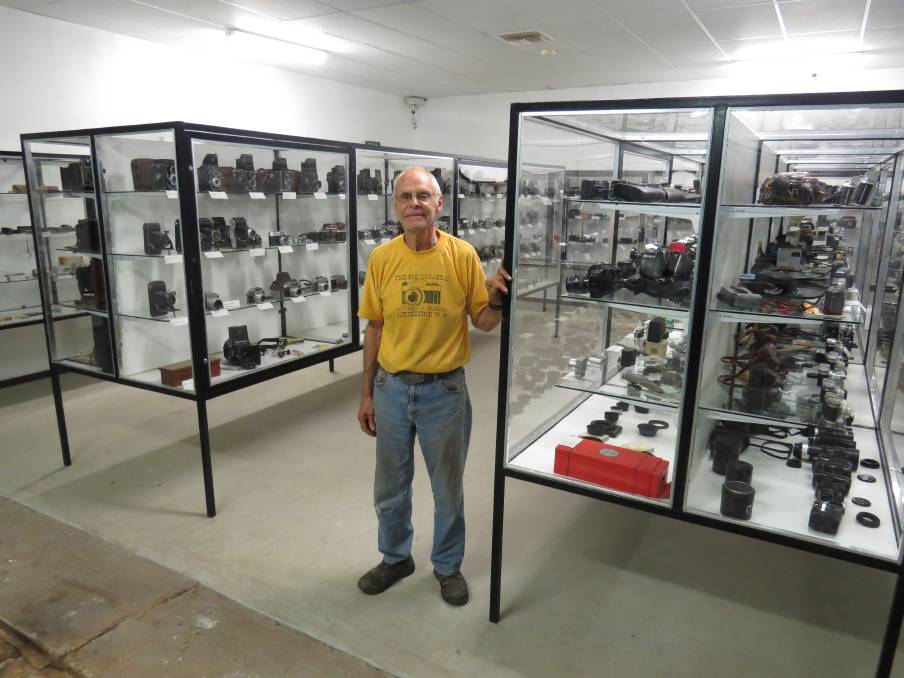 Pride and joy: Photography collector Chic Wadley inside his museum.

THE Big Camera in Meckering has re-opened to relaunch its new interior extension.

The site, located on the Great Eastern Highway, is the only museum of cameras open to the public in Western Australia.

The recent extension inside the museum took 10 months to complete and was necessary given the ever-expanding assortment of everything photography.

Operator Chic Wadley has been at the old service station site for 20 years.

"Since then my collection of anything photography-related, right up to digital, has more than doubled," Mr Wadley said.

Upon arrival in Meckering he had about 100 cameras.

"I am always looking to add to it I have just about every brand of camera you can think of," Mr Wadley said.

"I have cameras and camera equipment donated to me from all over the world, from England, America and all over Australia."

To be eligible for display a camera must be able to work.

"I have been interested in photography all my life, in fact my mother said I grew up with a camera in my hand," Mr Wadley said.

His extensive collection is stored in list form on a computer database.

He researches every camera in detail.

"I try and give us much information as I can," Mr Wadley said.

At the front of the museum rests a hand crank Kalee six silent film projector.

"When I got it off a doctor from Scarborough it was a lump of rust."

It has now been restored and is fully functional.

The Big Camera is open every day except Wednesday and Thursday from 9am-5pm.

Admission is $12 for adults and $6 for children.

The entrance fee can be reduced for large groups.