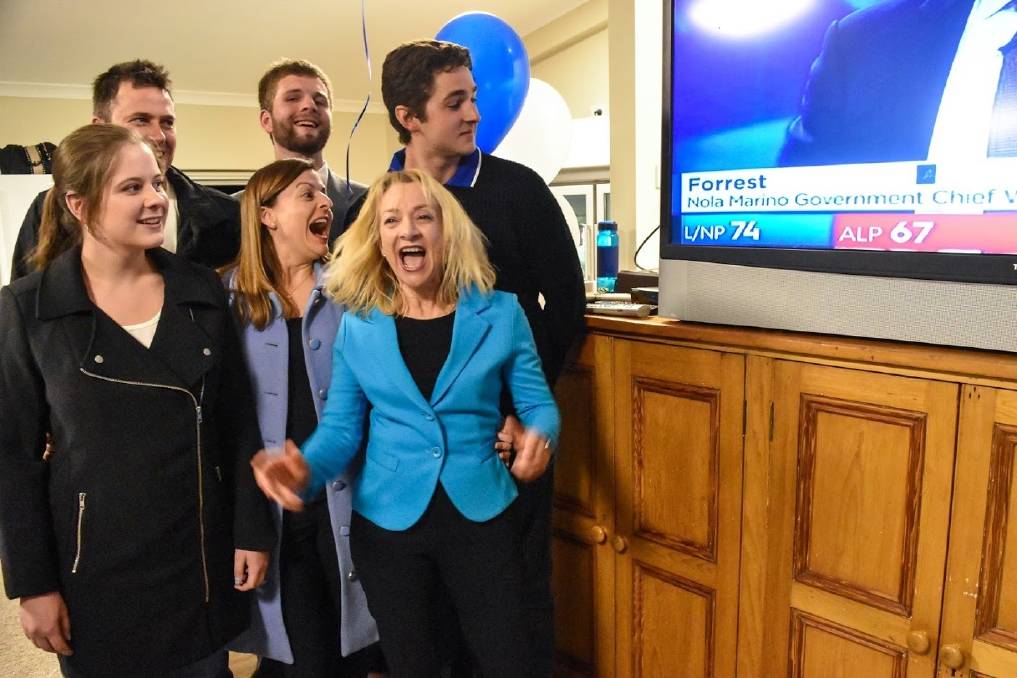 Nola Marino celebrates with supporters the moment live television coverage of the electorate showed her result.

At the time of Farm Weekly going to press on Monday the party remained strong in Durack with Melissa Price looking good for another term and holding a 15.2 per cent margin from major rival, Labor Party candidate Carol Martin.

Ms Price was excited by the result, saying it was a reward for effort.

"Since I was elected less than three years ago I have delivered and there is so much more I want to achieve," she said.

"It was no surprise to me that the Nationals did so poorly in Durack and O'Connor.

"Regional WA know the Liberal Party can be trusted to represent their interests and that we are delivering for the bush.

"This is demonstrated by my excellent result in Durack."

The Nationals WA took a hit in Durack, with a 7.2pc swing against candidate Lisa Cole.

"Without The Nationals WA, issues such as the backpacker tax, regional telecommunications and the GST rip-off simply wouldn't have been made a priority," Mr Hayward said.

"While we didn't get the result we wanted to, we are fighting hard to ensure the major parties take note and respond to regional issues.

"While we won't be heading to Canberra this time around, we remain dedicated to ensuring regional issues are on the agenda in federal Parliament," Mr Hayward said.

Mr Hayward said The Nationals WA would await the outcome of the Senate vote.

Rick Wilson was returned as the member for O'Connor with a 4pc swing on the primary vote, closely followed by The Nationals WA candidate John Hassell.

Mr Wilson said he had "mixed emotions" regarding the win as the final outcome of the election was yet to be announced.

At 10.30pm on Saturday night, the Australian Electoral Commission advised Mr Wilson that counting in O'Connor had been suspended because the two-party preferred count would be between Liberal and Labor, rather than the Liberals and the National Party.

"It may be some weeks before counting is completed but we are on target for a two-party preferred percentage better than 60-40,'' Mr Wilson said.

"Thanks to all the voters across O'Connor, as well as my volunteers, staff and family for their fantastic effort."

He said he had worked on issues raised by O'Connor voters, including communication blackspots, a change to the waiting periods for Youth Allowance and increasing the boarding school supplements for regional families.

"Unfortunately, if the ALP is elected many of these initiatives may be all for nothing," Mr Wilson said.

He said negotiations between the major parties and independents would continue while votes continue to be counted, with no final result expected for at least a couple of weeks.

Mr Hassell declined to comment as votes were continuing to be counted.

At time of print, 68.7pc of votes had been counted in the electorate.

A surprising result was the 3.8pc swing to the The Greens in O'Connor, taking the party's primary vote to 10.6pc.

The Greens candidate Giz Watson attributed the increase to the party's focus on issues ignored by the major parties.

"It is not all about 'jobs and growth'; issues that The Greens have raised such as climate change and humane treatment for people seeking asylum are strong in voters' consciences and we are the only party taking these issues seriously," Ms Watson said.

"While it is predominantly a State issue, the defunding of the Department of Agriculture and Food resounds strongly with farmers that I spoke to," she said.

"I know that the farmers I spoke to who watched the recent live export footage are just as disturbed as anyone," she said.

"While conditions have gotten far better and it will be difficult for farmers to pull away from the good returns from live export, I think we need to take a long-term approach and increase boxed meat exports.

"One of the arguments from pro-GM groups is that it is about having a choice to grow what they want. I would say it is the same argument for organic farmers that they also want the choice to grow without contamination," she said.

Liberal MP Christian Porter retained the seat of Pearce, but not without stiff competition from ALP candidate Thomas French.

Mr French recorded an 8.6pc swing to his party, which he said was a great result.

"The entire point of running was to show there is a viable option for voters," Mr French said.

"The problem with having a safe seat is that nothing gets done, so I hope that this shows the importance of looking after local voters."

Mr Porter thanked those who supported him and the Liberal Party in Pearce.

"While the immediate future for how government might look is not certain, be sure I will go on working to get the best for all of our communities in the electorate."

In one of the safest Liberal seats, Nola Marino has secured Forrest with a 13.8pc margin over closest rival, Labor's Lorrae Loud.

On preference count, Ms Marino holds 61.9pc of the 82pc of votes counted.

"I really want to thank every person in Forrest who had the confidence to choose me as their continued representative in Canberra," Ms Marino said.

"I represent everyone in this electorate, irrespective of how they voted, and that's something I do all the time.

"I've been so determined to give the people of Forrest the representation their families and businesses deserve."

Ms Marino also made special mention of her husband Charlie Marino. The pair celebrated their wedding anniversary on Friday.

In WA there has been a 2.7 per cent swing against the Liberal Party, 4.4pc to the ALP and 1.9pc to The Greens across 16 electorates.

So far, only one seat in WA, the south-east seat of Burt, will change from Liberal to Labor, while the seat of Cowan remains in doubt.

While the four agricultural seat counts were relatively cut and dry, the race to be the next prime minister is far from over.

On Saturday night, prime minister Malcolm Turnbull said he was still confident of forming a majority coalition government, but a hung parliament was looking increasingly likely.