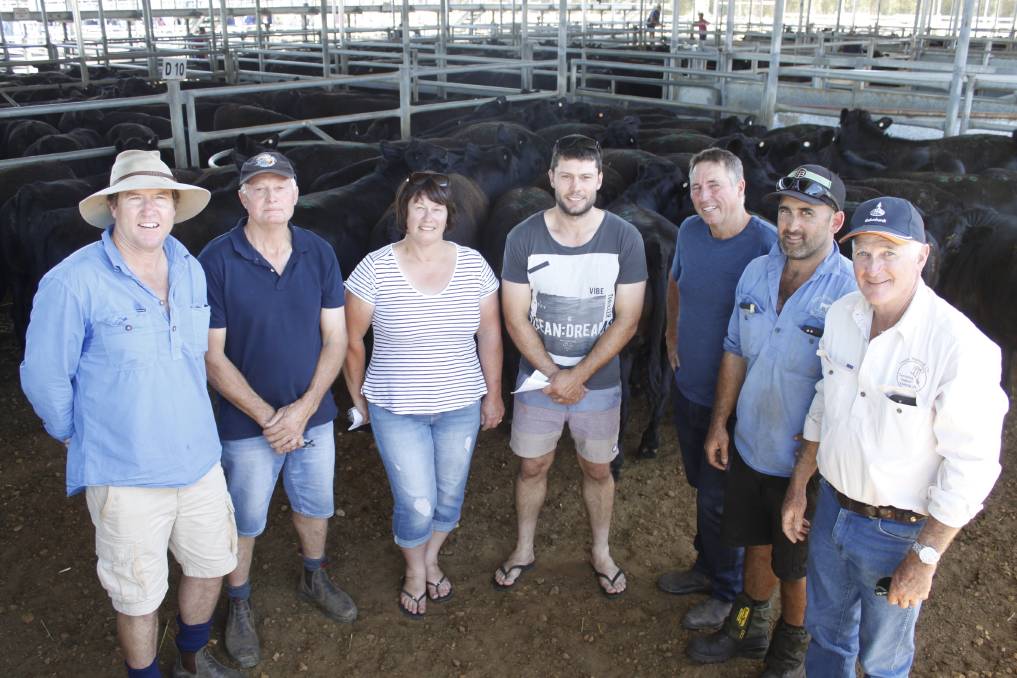 JUST like last year, it was a group of producers who specialise in breeding and lotfeeding Angus cattle, who cleared the decks at last week's Landmark Angus Weaner Sale at Mt Barker.

JUST like last year, it was a group of producers who specialise in breeding and lotfeeding Angus cattle, who cleared the decks at last week's Landmark Angus Weaner Sale at Mt Barker.

The Landmark team and its subsequent vendors yarded 2118 Angus weaner calves which cleared to an overall top price of $1427 and average of $1224 a head.

It was an exciting time to be at the yards with Landmark staff proud to have been responsible for what they knew to be the largest sale yarding of one single cattle breed in WA.

A sale-topping price of $1427 (353c/kg) was paid by the Matthews Family Trust for 16 weaned steers put up for auction by MK Sounness & Son.

The overall top-priced pen was snapped up by Kim Lester and his father Brian, Jarraluka Feedlot, Manypeaks.

As always the pair secured themselves a substantial haul of early steer lots.

They bought 15 pens, a total of 230 head, for the afternoon including seven from the sale's biggest vendors, Noel, Karen and Luke Bairstow, Arizona Farms, Lake Grace, who yarded 536 Coonamble blood steers in the sale.

The Lester family's purchases included some of the sale's heavier lots as well with its first of 12 steers from Arizona Farms averaging 426.3kg and making 325c/kg ($1385/head).

They also purchased from a handful of other standout offerings including a pen of 12 and a pen of 14 from Rayview Park, Albany, that were the third and fifth to sell.

Another sale regular that bought big was Pulfer & Nussbaum which had 17 pens of steers written down to its name.

By the day's end the account had purchased 276 calves from a range of vendors including Rayview Park, Jeff Pyle & Co, Manypeaks, Arizona Farms and BJ Panizza Family Trust, Albany.

It picked up three of the 12 pens offered MJ Blyth & Co in quick succession.

Yoolburra Pastoral also made an impression with the purchase of seven pens of Arizona Farms cattle.

Some 22 other buyers helped to clear the remaining pens of steers before Landmark auctioneer Harry Carroll moved onto selling the heifers.

While the offering wasn't overly vast, it was certainly filled to the brim with quality young females which had plenty of buyers wondering whether they should pick up a few last minute replacements.

It took 12 different buyers to clear the catalogue including SH Fry & Sons who jumped into action and snapped up the first two lots offered for 312c/kg ($1192/head) and 310c/kg ($1281/head), which were purchased to grow out and mate for next year's Landmark Boyanup Beef Female sale.

The purchases included the 374c/kg top-priced liveweight pen, which averaged 248.2kg to return $928 for Willyung Farms.