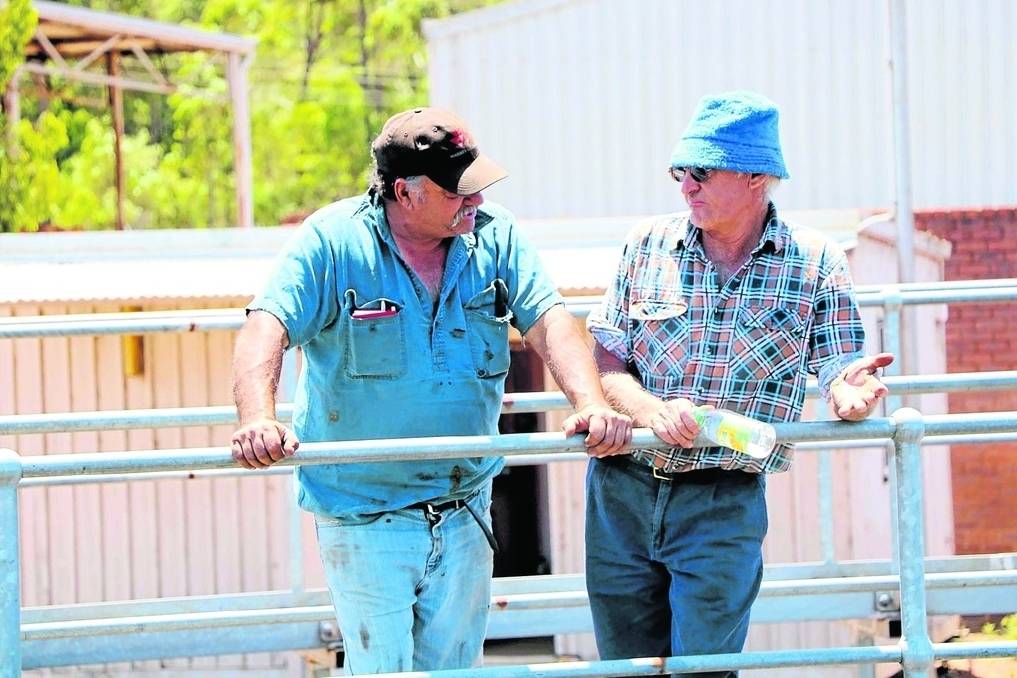 Manjimup producers Jim Bogoias (left) and Bob Pessotto, were both at last week's combined Elders-Primaries weaner sale. The Pessotto family sold steers to $1286 while Mr Bogoias bought two pens of heifers, paying to $1174 and the sale top of 362c/kg.

NUMBERS were well down on the expected yarding when 408 weaner calves were offered at the combined Elders-Primaries Manjimup sale last week.

NUMBERS were well down on the expected yarding when 408 weaner calves were offered at the combined Elders-Primaries Manjimup sale last week.

This was partly due to some being unable to muster because of fire and vehicle movement bans.

The quality of the yarding was very mixed ranging from some very good lines to below average drafts.

Steer calves sold to $1428 for the heavy end while lightweights topped at 400c/kg.

Mr Armstrong snapped up the first four pens sold, for Kalgrains, including the top-priced steer pen in the Primaries section, paying $1344 at 320c/kg for the 13 sleek Angus steers from Rim Rock Grazing, Boyup Brook.

The three pens of Angus heifers from WD & IM Phillips attracted buyers keen to buy future breeders, with Kevin Armstrong securing the first pen for $1276 when the 365kg heifers sold at 350c/kg.

The top steer price in the Elders pens went to a single Murray Grey steer weighing 510kg from JA Longwood that was bought for Harvey Beef Farms (HBF) costing $1428 at 280c/kg.

G & J Stoichev sold five Angus averaging 436kg for $1334 and these were snapped up by Mr Harris.

At the higher end of quality, a pen of seven Angus weighing 416kg returned $1374 for KL Edwards when Elders Capel representative Rob Gibbings bid to 330c/kg.

Another of the better pens were the 11 steers weighing 372kg from F Pessotto & Sons that sold to JL Piscioneri for 346c/kg to cost $1286, who had earlier paid $1253 for seven sold by KL Edwards.

Mr Harris was strong on the lighter calves buying several pens to $1172.

Rodney Galati also put together several pens for up to $1064, paid for two Simmental weighing 315kg from I & H Panzich.

JIG Grazing bought the first pen of heifers in the Elders offering, paying the top of $1293 at 318c/kg for the heifers weighing 407kg from I & H Panzich.

Other heifers bought by JIG Grazing included five from Clovermia for $1138 and four of the Flannagan heifers at $1042.

The top of 334c/kg was for a single heifer sold by Chateau June Jerome, one of the many heifers going to Mr Harris.

Westbeef Holdings and Galati Family Trust secured numerous pens each towards the back end of the sale for up to $1024 and $1060 respectively.