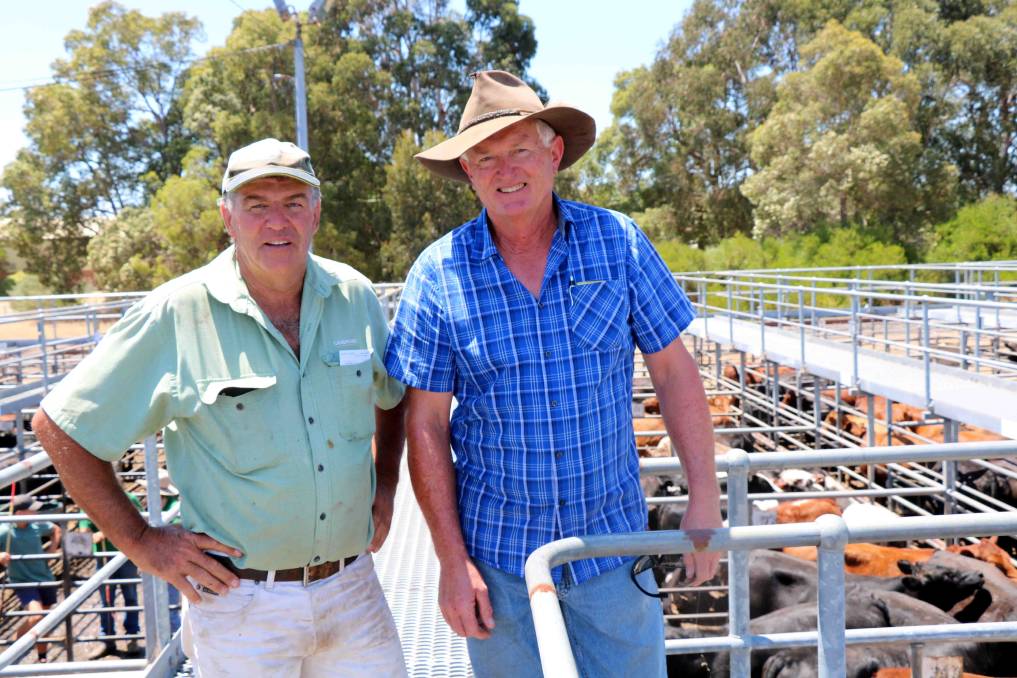 LANDMARK agents and staff deserve a bonus after the marathon task of drafting, penning and weighing more than 1600 mostly excellent quality cattle at the Boyanup store sale last Friday.

LANDMARK agents and staff deserve a bonus after the marathon task of drafting, penning and weighing more than 1600 mostly excellent quality cattle at the Boyanup store sale last Friday.

An additional 400 cattle above the expected and advertised numbers can cause a logistical nightmare in presenting cattle at their best, but this wasn't the case, with the yarding presented in top order by Landmark.

Just a pen or two did not reach vendor reserve, so unless these were sold after Farm Weekly left the yards, a gross of more than $1.827 million and an average of $1128 was achieved to be right up with all the other top rate sales of the season.

A variety of cattle types were presented with a smaller number of pens of Friesian steers topping at $1457 and 282c/kg, while appraisal dairy steers made up to $1005.

Most of the smaller dairy steers were just above poddie size and these still sold around $700.

Beef heifers continue to attract buyers, selling to 400c/kg and $1471, mostly to graziers and lotfeeders.

A couple of pens of first-cross unmated heifers sold to $1200 with a pen of mated beef heifers making $2200.

A good selection of sound mated cows sold consistently to a top of $2650.

Cow and calf units were smaller types and these sold to $2400.

The top Friesian steers selling liveweight were 10 offered by D Proctor with the 583kg steers selling to Landmark Margaret River agent Jock Embry at $1457 and 250c/kg.

A large offering of beef steers reached $1533 and 316c/kg, paid for eight Simmental cross from MS & AM Talbot, Brunswick, among the many bought by Willowbank number three account.

Sheron Farms, Benger, sold numbers which were mainly bought by lotfeeders from $1146 to $1302.

Appraisal dairy steers topped at $1005, paid for 14 from Yallingup Earthworks.

Rodney Galati had a good number of bulls to operate on, securing most of these for Livestock Shipping Services.

Silverlands, Bridgetown, had numbers for sale and these topped at $1031 for a pen of 14 heifers weighing 308kg.

Several pens were sold by RG Major, Williams, with a line of nine Angus selling at 300c/kg and $1013, while a line of their lighter Herefords topped at 350c/kg.

First-cross unmated heifers saw a pen of seven Angus from DM Sier & Co make the top of $1200 when bought by Mr Embry, while Ralph Mosca, Landmark Harvey, bid to $1000 for the next six.

Another five also went to that buyer for $2550.

Cows and calves from I & C Tognela topped at $2400, while a line of five Murray Grey units and three Angus from Olive Hill Pastoral sold for $1750 each to Green Grass Pty Ltd.