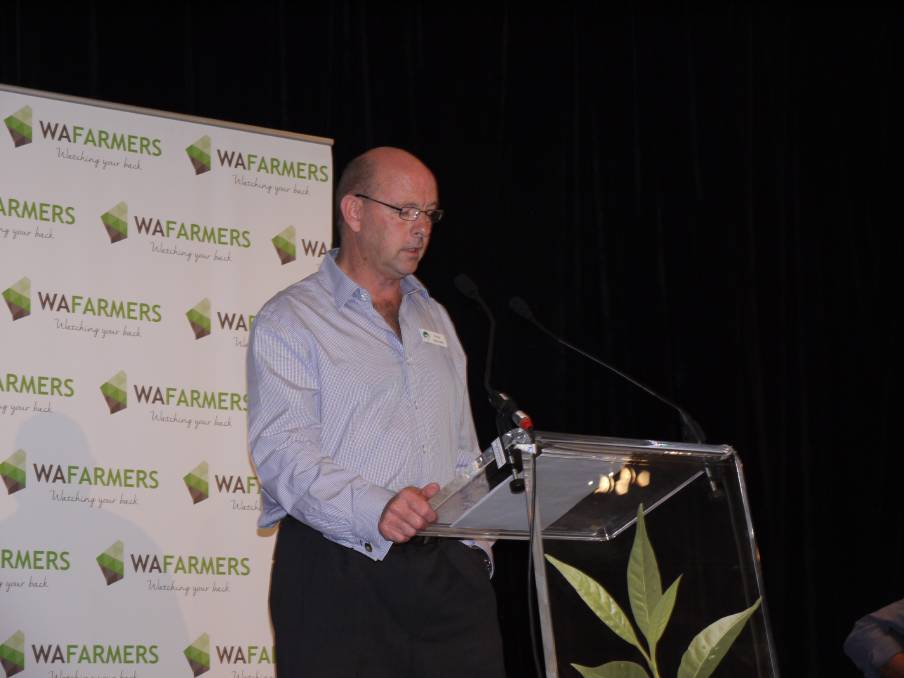 NEW appointments, industry awards and a lively presentation by young farmers were highlights of the three-day WAFarmers annual conference, which brought together a range of industry leading presenters and various commodity sections to inspire growth among its members.

NEW appointments, industry awards and a lively presentation by young farmers were highlights of the three-day WAFarmers annual conference, which brought together a range of industry leading presenters and various commodity sections to inspire growth among its members.

The event began on Wednesday, March 1, at the Pan Pacific Perth with the WAFarmers annual general meeting, which included the appointment of new board members.

Australian Paralympian and HBF Ambassador Brant Garvey spoke at a business breakfast on the second day about how mental resilience, persistence and maintaining a positive outlook can translate seamlessly across any workplace.

The rest of the day comprised of commodity section and guest presentations.

Following the meat and wool councils amalgamation last year to form the livestock section, Mr Slade updated members on how the council was running.

The AGM was followed by presentations from Department of Agriculture and Food WA (DAFWA) research officer Kate Pritchett and WA chief veterinary officer Mia Carbon, who detailed opportunities in the WA sheep industry and biosecurity for market access and origin certification information.

Following his re-election, Mr Young said the grains section would focus on ensuring growers continued to have access to chemicals under review by the Australian Pesticides and Veterinary Medicines Authority (APVMA), port access, biosecurity and assured there was "a firm commitment" from government to invest in research and development in the grains industry.

The vice president position will be appointed by The WAFarmers grains section at its next meeting.

During the general section, DAFWA executive director for grains and livestock industries Peter Metcalfe discussed the role of the department (see breakout).

Mr Metcalfe also discussed the recent projects undertaken by DAFWA and how the department was making WA agriculture competitive on an international platform.

Mr Metcalfe said the department and the Northern Beef Futures had been working with industry and looking at ways to transform the pastoral industry.

"We have been looking at alternative business models to create value within the beef supply chain and mapping that back, as to how growers might be able to capture that (opportunity),'' he said.

"We have also created a review around infrastructure and mapped where stock movements are from."

Mr Metcalfe said with the use of heat map data they had identified the majority of cattle in the north were coming from the Fitzroy Valley region.

"We hear a lot of discussion about Kununurra, Karratha and Port Hedland port, yet the bulk of cattle are in the Fitzroy," he said.

"So there is opportunity there to identify where construction needs to go."

One of the key focus points for DAFWA was to double the sector by 2025.

Mr Metcalf said in doing that, it was important to look at other markets and what they want.

He said the department had investigated the Asian market and identified 20 opportunities within eight key Asian markets that WA could take advantage of.

"We have a production system in place and a competitor advantage," he said.

"That is helpful to guide investors and other business into that space.

"There is consumer demand."

Mr Metcalfe said the sheep space was also on its radar.

"We have a project focusing on supporting and developing new markets for sheep meat and export into Asia and the Middle-East," he said.

"We have assisted meat processors to develop supply chains into China."

Mr Metcalf said with further work into the Chinese market, he hoped potential demand would generate an additional half a million lambs from WA in the near future.

"We will need to spend more time with exporters and processors on how to encourage people to get back into the sheep industry," he said.

"To drive the sheep flock from below 13 million in a northerly direction."

As telecommunication was a major issue in the regions, Ms Muscat and Mr O'Leary discussed how the existing telecommunications network could be optimised for greatest on-farm effect, opportunities for sustainable infrastructure and future investment.

Audience members asked questions about the placement of towers in regional areas.

Ms Muscat said Telstra did not have control over funding or where it went within the blackspot program.

"This is determined by a separate program within the Commonwealth which takes recommendations from a variety of community members,'' she said.

"As a contractor within the blackspot program, our job is to respond to the requirements from the Commonwealth and build against where these are determined to be, by the Commonwealth."

The day finished with some general business raised by WAFarmers president Tony York, followed by a sundowner.

The third day of the conference focused on growing regional opportunities and wealth.

Agriculture and Food Minister Mark Lewis told the conference his overall vision for the agriculture industry was to double its production.

"It is within our grasp to double agricultural output by 2025 - we've got demand at out doorstep and the world's best farmers," Mr Lewis said.

But why settle for a $13b industry when it is entirely plausible to grow to $25b plus - this will require a growth rate of 10 per cent but it is certainly feasible."

Mr Lewis was followed by University of WA research fellow Neville Ellis who spoke about people's sense of place, the mental health affects of climate change and the resilience of agricultural regions, and then by Nuffield Australia 2014 scholarship winner Nick Gillett.

Newly-appointed Nationals Farmers' Federation president Fiona Simson gave delegates an update on how the peak national body for agriculture was working with industry and its members, including WAFarmers, to ensure modern farming is not only viable and sustainable, but continues its vital and growing contribution to the nation.

The panel presentations generated thoughtful discussion about the future of farming and highlighted why the sector needs more young people in it to capitalise on opportunities.

"As an industry we need to set the record straight, its not all about driving tractors, you don't have to be born a man to farm, and let alone even born into a farm to farm, and it ain't all wheat in the Wheatbelt," Ms Brennan said.

"Secondly there is a wave of people, men and women that are busting to get into agriculture and we need to show them the diversity of opportunities in the industry, and tell them that they're invited."

The final part of the day saw Andrew Whitelaw, Mecardo, and Robert Herrmann, Ag Concepts Advisory, deliver their Beat the Market presentation, a demonstration that left attendees informed as to the three things they needed to know to facilitate their success in agricultural business.

These included an outlook on market information, knowing your business and production costs and acknowledging your strengths and weaknesses.

WAFarmers president Tony York said the conference had built on the success of the previous year's event and was a reflection of things to come within the sector.

"In addition to being a reference to what it is that farmers and producers do every day, we wanted to highlight agriculture's bright future by discussions growing regional opportunities and wealth," he said.

"It has been acknowledged that agriculture in WA has the potential to double production by 2025, so by delivering the latest agricultural information and showcasing some of the brilliant people we have in WA agriculture, we hope we have inspired attendees to recognise opportunities for growth."

The event wrapped up with a gala dinner and awards ceremony, where seven individuals were recognised for their dedication and service towards WAFarmers and the WA agriculture sector.

Marg Agnew was awarded a life membership for her involvement with WAFarmers in varying roles, which spans more than 40 years.

"Like many influential women in agriculture, she works solidly, devoid of ego and almost always under the radar," he said.

"Her efforts have literally changed the face of agriculture at many levels, especially when it comes to the empowerment of women in agriculture through her own impressive example."

The Young Farmers Award was given to Henry Gratte, the President's Award went to Philip Brunner and a Special Award was presented to Robin Hewitt.

Northampton's Josh Kennedy entertained the crowd as guest speaker for the night and detailed his experiences playing AFL for the West Coast Eagles and Carlton football clubs.

The night concluded with the launch of a new eggs product under the WAFarmersFirst brand (see breakout).