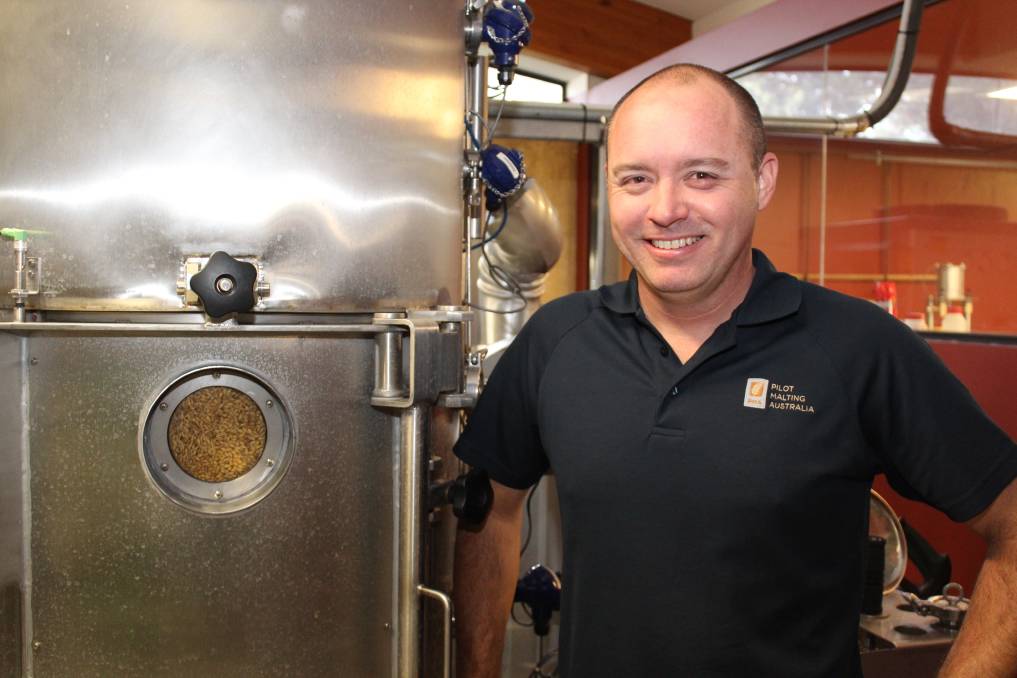 Pilot Malting Australia operations manager Jon Luff with Baudin barley being malted at the facility in Joondalup. It is simulating the malting proceses of InterMalt's Vietnam facility, which is set to open next month

WA malting barley varieties are being put through their paces as part of a South East Premium Wheat Growers Association (SEPWA) project.

WA malting barley varieties are being put through their paces as part of a South East Premium Wheat Growers Association (SEPWA) project.

The grower group has partnered up with Edith Cowan University’s (ECU) Pilot Malting Australia (PMA) facility and InterMalt to malt WA barley as part of a three-year project.

The facility mimics the malting process of InterMalt’s new facility in Vietnam which is set to open next month.

Last month, Bass and Baudin malting barleys were processed at the pilot malting facility on the Joondalup campus which will help refine the malting process before the barley is commercially malted by InterMalt.

The facility was set up in 2013 and is a collaboration between ECU, Australian Export Grains Innovation Centre and the Department of Agriculture and Food WA.

The process takes six days where the grain is soaked for up to 24 hours then germinated for four days before undergoing 20-24 hours of kilning.

At the end of the process the malted grain can be used in a range of products including beer and confectionary.

So far Bass and Baudin have been tested, along with Latrobe, Vlamingh and food variety Hindmarsh.

“Each variety has its own little quirk and there are seasonal differences as well,” he said.

“PMA is a halfway step between micro malting and commercial malting and it helps reduce the risks for maltsters when introducing a new variety commercially.”

SEPWA project officer Nigel Metz said the project aimed to develop the link between “the farm, the brewery and the glass”.

“We are trying to get the setting of the pilot malting facility to match those of the new InterMalt facility in Vietnam and in that we can hopefully road test grain before it goes on a ship to Vietnam so we understand its quality parameters better,” Mr Metz said.

He said at a farm level the malting process was not well understood and part of the project aimed to increase the knowledge of the process.

“There are the complexities of varieties, the agronomic treatment and how that feeds into the malting and brewing processes and that is not well understood at a farm level,” he said.

Mr Metz said the South Coast region produced about three million tonnes per year of barley, making it an important crop for the region.

As well as the project with PMA and InterMalt to trial WA barley in a commercial malting environment, the grower group was also looking at how two European malting varieties – Malster and RGT Planet – would fit in the Esperance region.

Both varieties are being trialled this year in the SEPWA barley trials and are currently under review by Barley Australia for malt accreditation.

“Brewing is traditionally European and South East Asia brewers are European trained so they are all familiar with European varieties,” he said.

“Maltstar and RGT Planet are proven malts and accredited names into breweries like Heineken which is an advantage.

“They have not been malt accredited by Barley Australia, but given they are used internationally for malting if they had an agronomic fit and met malt specification we could possibly accelerate that adoption level.”

While the two new varieties are being trialled, Mr Metz said long-term the South Coast region needed a rationalisation of malting barley varieties.

This was in line with a Statewide rationalisation plan which was launched by the Grains Industry Association of WA in August last year, following industry consultation.

Bass, La Trobe and Scope CL will be the main malt barley varieties for the 2017/18 harvest with limited segregation for Flinders and Granger.

This year SEPWA started discussions with members to reduce the number of varieties grown in the region to increase interest from traders and exporters.

“If you don’t have critical mass in your piles of grain, the attraction for traders to buy those piles of grain is limited, so if we can consolidate that over time and make those piles larger, they become attractive to more traders,” he said.

“The smaller piles are often traded at a $5-8 per tonne discount to Kwinana, at close to a million tonnes of barley last year, that’s $8m that didn’t come into our community – you can’t argue with that.

“The discussion has been there for quite some time, but we will hopefully between now and harvest, generate a bit of debate amongst our members and towards the end of harvest draw some lines in the sand while people still have grain shifting around and they can make some decisions in terms of seed retention and seed cleaning.”