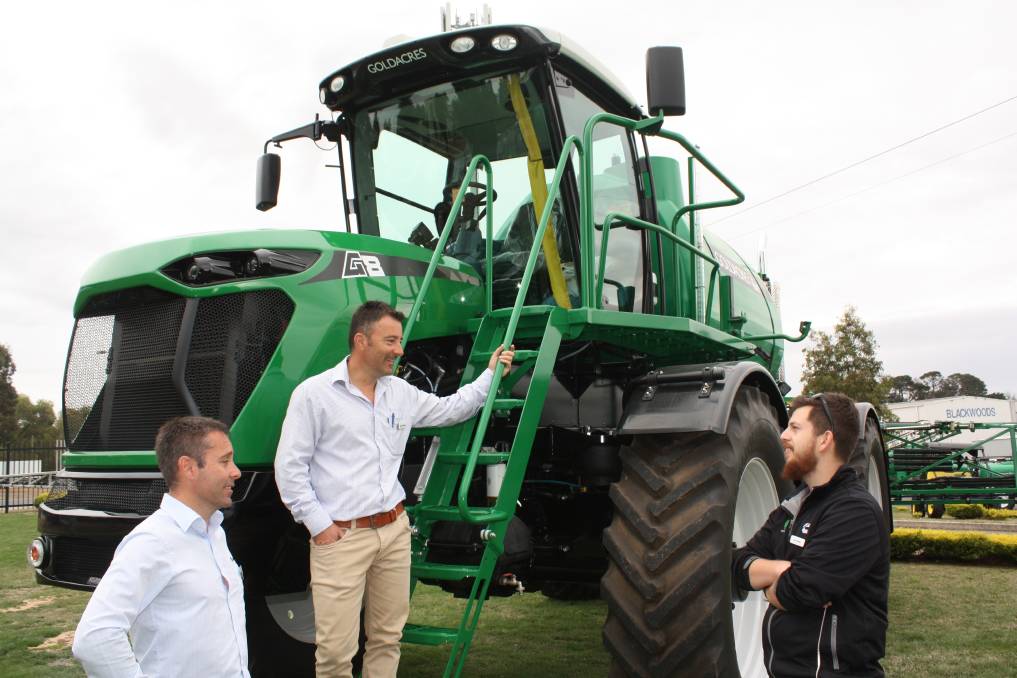 It was a significant event to mark the success of an Australian manufacturer punching above its weight in a highly competitive boomsprayer market, dominated mainly by corporate players.

One of the few family-owned companies remaining in the market, Goldacres has earned a reputation for quality, reliability and innovation.

All of that was on show last week to its dealers and customers, with more than 400 people involved in factory tours, ride and drive events and assessing the company’s product range and history at static displays.

A tracked model already has been sold to an Esperance farmer and was delivered earlier this month.

According to Goldacres sales and marketing manager Stephen Richards, the boom had been under development for about 18 months.

The hydraulic system is driven directly from the transmission to provide plenty of oil flow without the engine working at high RPM, keeping fuel use to a minimum and providing better hydraulic performance.

Goldacres also has a 42m (138ft) Tri Tech Penta Boom, to herald the start of a new series of large width booms to take multiple plumbing options and folding widths.

Gone the trademark cable fold which has been replaced with hydraulic cylinders, giving a secondary breakaway capability at the outer fold point in addition to Goldacres’ 3D breakaway at the boom tip.

A great feature on the Goldacres Super Cruisers is the ISO-compatibility, allowing any guidance system to steer the unit as well as make use of the VT screen as a product controller.

The VT screen also displays the new Norac ISO auto-height control which is an option on all Goldacres sprayers.

Mr Richards said the company had expanded to 10 dealer outlets in WA with seven re-sellers for parts and service.

“Actually it’s pretty rare we sell a stock machine because every customer has something they would like to add or replace to suit their particular requirements.

“We encourage that because we know there are different needs and wants on every farm.”

Mr Richards said the tracked G8 was a big capacity machine that weighed in at about 20 tonnes loaded.

“So to have it on tracks with twice the contact area makes sense,” he said.

“There is a lot of interest in the extra flotation it provides, particularly if you’re farming in wetter areas.”

The Goldacres-designed undercarriage allows for fitting a the Soucy S-Tech 7016 track system.

“This will provide twice the ground contact area compared to a 520/85R46 tyre,” Mr Richards said.

Mr Richards said the G8 could travel up to 40 kilometres an hour, though like all track systems, operators would need to manage potential overheating and wear.

Goldacres has a four model SP range with tanks sizes ranging from 3000 litres to 8000L.

The latest G4V was unveiled last week, designed specifically for the horticulture market.

“Our aim was to supply the horticulture market with a light weight, self-propelled sprayer that was four-wheel steer, four-wheel drive with a narrow track width,” Mr Richards said.

“The sprayer needed to be the most efficient spraying at typically lower speed ranges, with higher capacity hydraulics to operate a large spray pump for high flow rates.

“The design team came up with a unique hydro-mechanical drive system which we think provides the basis of the ultimate horticultural self-propelled boomsprayer.”

The company also has a trailed “Prairie” range with tanks sizes from 1500L to 8500L and a compact range, including models for ATVs (all-terrain vehicles).

p Ken Wilson attended the expo as a guest of Goldacres.