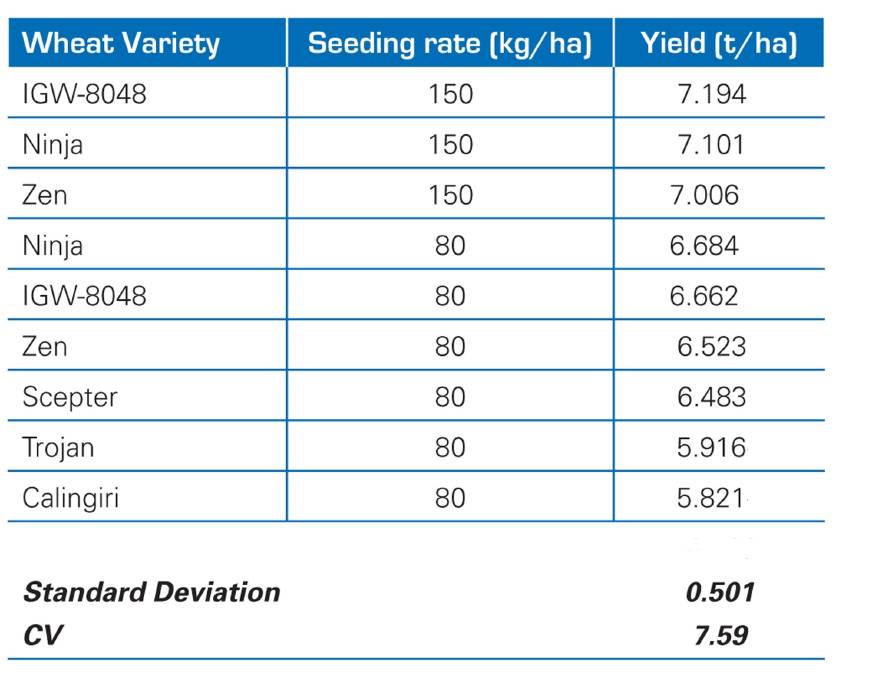 This graph shows the combined yields for each variety in the plot trials at West Kendenup last year in comparison to the seeding rate. During the dry start to the season, with only 49 millimetres of rain for April, May and June, the site didn't show very high yield potential, until 118.2mm fell in July.

THE Stirlings to Coast Farmers (SCF) Noodle wheat project has shown that high-quality Noodle wheat can be grown consistently in the high rainfall zone of southern WA.

THE Stirlings to Coast Farmers (SCF) Noodle wheat project has shown that high-quality Noodle wheat can be grown consistently in the high rainfall zone of southern WA.

The SCF Noodle wheat trials tap into the exclusive international market of premium Noodle wheat, which in the past, has been associated mainly with moderate to low rainfall areas.

According to grain marketers, there is a perception from overseas markets that Noodle wheat grown in the southern Albany zone is of poorer quality than from northern regions, but the trials are showing that this is not the case.

WA is the only external source of wheat grain for Udon noodle manufacture in Japan and Korea.

SCF research and development co-ordinator Nathan Dovey said the three-year project, funded by the Department of Primary Industries and Regional Development’s Grower Group Fund, was in the final year of successful trials.

SCF has been working closely with Intergrain, which has been developing varieties that are more suited to the high rainfall zone and resilient to late season rains.

“We have improved the agronomy package for growing Noodle wheats in the Albany port zone,” Mr Dovey said.

SCF’s trials take into account both the perspectives of the farmer and international markets.

“We are trying to reduce the risk for farmers of having their Noodle wheat downgraded for not making noodle one or noodle two grade and establish what they need to do to hit the top-grade windows more consistently,” Mr Dovey said.

In March, SCF released the 2017 trials review of its crop updates, which outlined the results of Noodle wheat trials, along with feed wheat, deep ripping and snail baiting trials.

SCF reported in the review that the success of the trials would also mean greater long-term diversity and options for crop rotations in the southern high rainfall zones.

The review reports on the key findings from the 2016 and 2017 trials, including the effect of location, yield potential, seeding rate, effect of harvesting time, wheat varieties and price.

“Growing Noodle wheat has been perceived as high risk by growers in the high rainfall zone due to the risk of not making ANW1 grade,” Mr Dovey said.

The two messages for farmers that have come from the trials are to start seeding Noodle wheat later and that location is important, with Noodle wheat growing less suitable for farms close to the coast.

“Once we get a bit further inland there are less chances of harvest rains,” Mr Dovey said.

The Chillinup (Road) Line is an approximate cut off point for where the risk of downgrade for noodle wheat or failure to meet grade is less risky.

Chillinup Road is about 30 kilometres north of the coast, runs east to west and is within the high rainfall zone.

“We have farmers growing Noodle wheat just north of the Chillinup Road line who are achieving fantastic yields and make noodle grades in most years,” said Mr Dovey.

Members south of the Chillinup Road have removed or greatly reduced Noodle wheat from their program because of the risk of failure to meet noodle specifications.

SCF has been experimenting with different times of harvest to try to manage the risk of harvest rainfall in their small plot trials.

“There are two schools of thought for harvesting Noodle wheat: farmers can harvest it a bit wet then dry it, at a cost, knowing they will make noodle grade, or they take the risk and wait for the moisture to come down, which then increases the chance of a rain on it,” Mr Dovey said.

“Through our plot trials we have tried to replicate that real-life situation by harvesting a little bit too wet, at about 15 per cent moisture.

“Then we come back in later when the moisture is under 12.5pc and see if there is any quality or weight difference in the grain.

“At this stage we have not found a clear answer to this conundrum.’’

Mr Dovey said price had a big influence on the decision to grow Noodle wheat.

“We are hoping another year of data in 2018 will give us a clearer answer to this question,” he said.

Last year SCF tested the varieties Zen, Ninja and IGW-8048 (yet to be named), at sowing rates of 80 kilograms per hectare and 150kg/ha.

Testing of seeding rates will be used to further fine-tune the optimum sowing rates for the soil types in high rainfall areas this year.

Even with successful research trials, Mr Dovey said the Albany port zone was yet to convince international markets that its noodles hold the same quality as other parts of the State.

Mr Beasley was able to highlight the potential for high rainfall zone noodles in the southern WA growing region.

Mr Blake addressed the forum about the potential benefits of the SCF Noodle wheat project, which has developed an agronomic package to manage the challenges of growing Noodle wheat in a high rainfall area.

“Our members in the Albany port zone want to develop long-term relationships with buyers in Japan and South Korea,” Mr Blake said.

“We will be undertaking further market development work this year in collaboration with our project partners.”