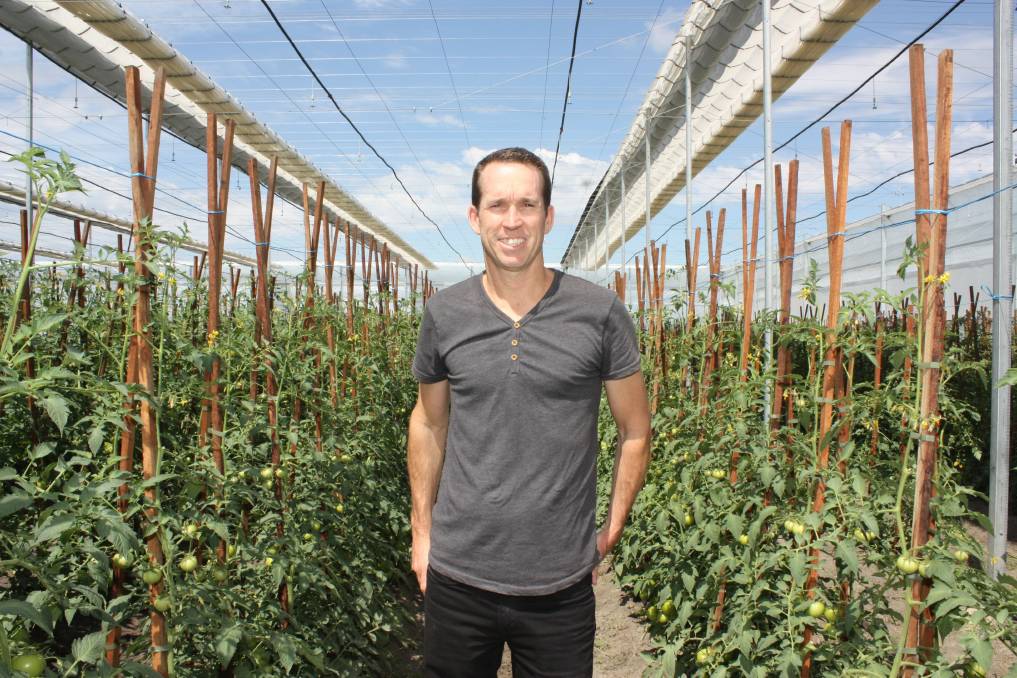 Wide Open Agriculture chief executive officer Ben Cole at the regenerative agriculture and food company's Arthur River greenhouse, which will this year hone in its production on tomato and capsicum crops.

WHEATBELT-based company Wide Open Agriculture (WOA) has ended its State Initial Public Offering (IPO) roadshow on a positive note, luring higher than expected subscriptions from local investors within a week of its launch.

WHEATBELT-based company Wide Open Agriculture (WOA) has ended its State Initial Public Offering (IPO) roadshow on a positive note, luring higher than expected subscriptions from local investors within a week of its launch.

After opening its IPO on Friday, April 20, the regenerative agriculture and food group last week showcased its vision to potential shareholders in Scarborough, Fremantle and Perth, attracting crowds of more than 100 at each event.

“We’re getting strong interest and have already raised what we were hoping to in the first week,” Dr Cole said.

“We have had such positive responses from farmers, community members, shire councillors and the Wheatbelt Development Commis- sion.

“Overall there was this strong sense of positivity and encouragement for what WOA is trying to do and a lot of the interest is about job creation and understanding the protective cropping system.”

Founded in 2015, WOA is a WA company partnered with Dutch organisation Commonland, with a regenerative agricultural plan “for the Wheatbelt, in the Wheatbelt”.

The business has a “four returns” philosophy, which aims to deliver economic, environmental, social and inspirational gains, to encourage growth and investment in regional WA.

As part of this plan, the company established a pilot greenhouse at Arthur River which has been up and running since early 2017.

The half hectare smart shade house allows vegetables to flourish in a controlled environment, with produce sold to customers in the Great Southern and Perth under the Food for Reasons brand.

Last summer 25 vegetable varieties were grown in the greenhouse but Dr Cole said the focus of production had begun to evolve.

“We’ve recognised that the vine crops – the tomatoes and the capsicums – have produced well and as we go forward they’re two of the crops that we’re looking at closely to specialise in,” Dr Cole said.

A three-zoned diversification project was also set up by WOA last year on a 320 hectare property in Buntine, which Dr Cole said had so far shown positive signs.

The demonstration site is split into an economic zone, a revegetated natural zone and a combined zone, as part of the company’s long-term vision for a sustainable agricultural system.

Following the success of the initial pilot projects, Dr Cole said WOA was looking to expand its horizons to value-added products for domestic and export markets.

“It’s about using existing cereals and livestock being grown in the Wheatbelt under the regenerative farming systems,” he said.

“We’re basing it on what regenerative farmers are growing now – we know they’re growing great oats and barley and wheat, some canola and then, of course, the sheep products are good as well.

“We’re at the stage where we’ve got four or five recipes or product ranges identified and then the actual formulation and decision-making will happen in the next two months.

“We want to make sure it resonates with the Wheatbelt first, then Perth and, of course, we’ve got our eyes on Singapore and Hong Kong markets.”

In order to turn its dream into a reality, WOA is seeking $5 million from local shareholders to list on the Australian Securities Exchange.

At $0.20 per share and a minimum subscription of $2000, Dr Cole said investing in WOA was a great opportunity for the Wheatbelt community to invest in its future.

“Buying shares in Wide Open Agriculture is a statement of belief that regenerative, diversified farming systems can deliver inspiration and great outcomes in the Wheatbelt,” he said.

“I think people are excited to hear that there is a positive story coming out of the Wheatbelt, the shade house has worked, the regenerative farmlands is an exciting opportunity and then the food really attracts people in Perth.”

Dr Cole is this week taking the WOA IPO roadshow to the Eastern States, with meetings planned in Sydney and Melbourne.

He encouraged those interested in investing in the business to get in quick.

“We’re urging people who are interested in WOA to get in now, because they’re the people we want,” Dr Cole said.

“We urge people to get online and read the prospectus and apply online if they’re interested.”