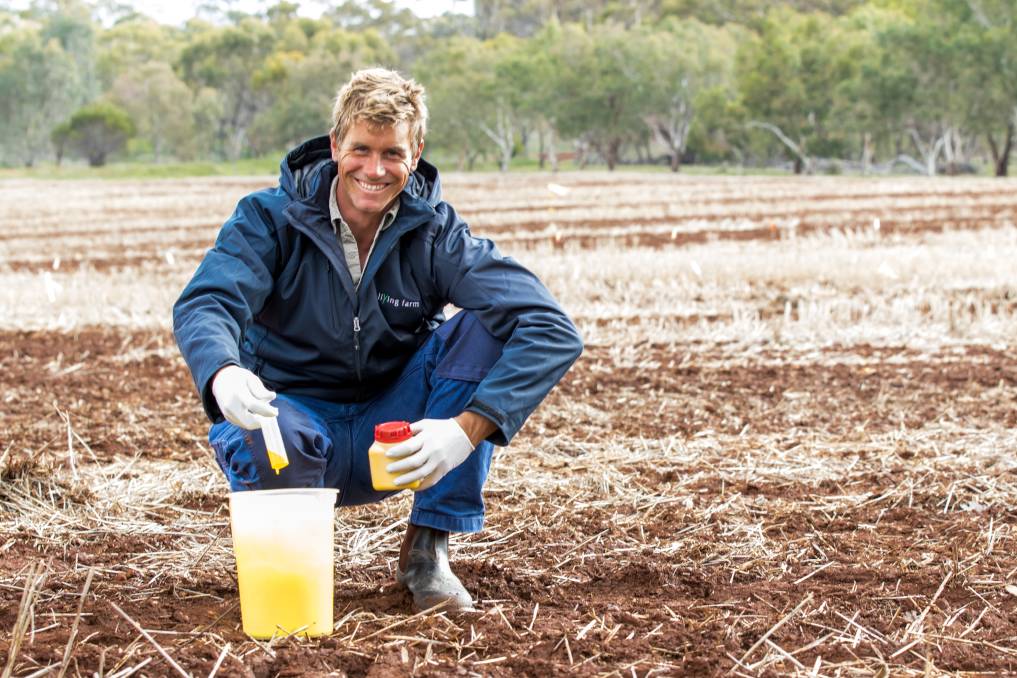 Over the past 10 years, Richard Devlin has grown Living Farm from being a one-man business to a successful agriculture research company and was recently recognised for his success at the 40Under40 awards. (Photo: Supplied).

RICHARD Devlin grew up as a city boy in Perth but farming roots sparked his interest in an ag career and eventually he became a part-owner of the successful agriculture consulting and research business, Living Farm.

RICHARD Devlin grew up as a city boy in Perth but farming roots sparked his interest in an ag career and eventually he became a part-owner of the successful agriculture consulting and research business, Living Farm.

Living Farm, based at York, was established in 2007 by John Foss as a grower group providing independent information for its members.

Richard joined the business one year after its inception when he became an equity partner and took on the role of managing director.

After university, Richard worked for a local research company before travelling for a few years to the United Kingdom, Canada and South America.

Prior to leaving for his travels, Richard had been in contact with John about the opportunities in agriculture and he told Richard to enjoy his trip and keep an eye out for global ag trends.

Richard ended up working as an agriculture researcher in Cambridge, which took him to most corners and farming systems in the UK.

“It struck me how similar global ag research was and that it was going to be the gateway to increased global food production,” Richard said.

“So I was thinking about this and John Foss’ grower group in WA when I heard word from contacts back home that a grower group/research business had came up for sale in York.

“This business was owned by Bill Roy who was a pioneer and a bit of legend in WA private ag research and agronomy so it made sense that if we (John and I) could combine John’s grower group with Bill’s business that we would not only have the start of a research business, but we’d also have a decent-sized Wheatbelt grower group.”

In 2008, Living Farm started to emerge to what it is today – an agriculture research business with a self-funded grower group.

In the early days after Richard came on board, Living Farm worked within its means on a small scale, however once the work started to roll in the business began a program to upgrade its plant and equipment.

“One of the fonder memories in the early days was seeding with the old plot airseeder that came with the business when we bought it,” Richard said.

“It had a little two stroke Yamaha motor to power the fan on the airseeder and we’d be seeding away at the back of Narembeen or somewhere with this little motor screaming away and blowing blue smoke.

“If you closed your eyes and took a deep breath in you could almost convince yourself that you were at the boat ramp on the coast.

“Needless to say, we converted it to a four stroke Honda motor as quick as we could.”

Within 10 years Living Farm has grown from pretty much a one-man show of Richard to a team of 15 full-time staff with some casual workers throughout the year.

As well as expanding the contract research side of the business, Richard was determined to progress the grower group and said demand is still strong.

“Lots of progressive growers are looking for independent information and new information can be difficult to find, especially these days when most of it is only a Google search away,” he said.

“Growers also appreciate the fact that they are part of a self-funded group – if they want to see it then, within reason, we will test it for them.

“Many farmers will see the benefit of having research conducted in their own patch and I know many of our growers have benefitted from some of the localised responses to crop varieties and chemicals.”

A second office at Kununurra opened in 2013.

Richard said one of the key drivers of the business’s expansion was securing the Grains Research and Development Corporation (GRDC) National Variety Trial (NVT) program of the Geraldton and Kwinana port zones and more recently conducting the first GRDC NVT trials at Kununurra.

Richard’s and Living Farm’s success was recognised at the 40Under40 Gala and Awards Presentation Evening last month which celebrated the success of 40 entrepreneurs under the age of 40.

He was selected as a top four finalist out of more than 100 candidates and Living Farm won the Small Business category.

Richard said his success at the 40Under40 awards prompted him to step back to recognise his success.

“When I was nominated and looked at all these amazing businesses, I probably didn’t think that I was in with a shot but when I reflected during the application process, I had to think about what I have done with the business,” he said.

“I realised I have probably taken my success and the business’ success for granted but once it was on paper, I realised that we were doing a lot for farmers, international agribusiness and rural communities, so once that was all taken into account I could see why we did as well as we did and we should be proud.

“Although being nominated for the 40Under40 award was more personal recognition, a lot of it is because of the people around me, because I haven’t gotten to this stage without having good people around me - and that’s not just employees, but family and friends as well.”

With Richard’s passion, vision and strong leadership, the future of Living Farm looks promising with it continuing to be at the forefront of the industry in WA, particularly in the Central Wheatbelt.

“In the short-term we will continue to provide world-class research for our clients and independent advice for our growers,” Richard said.

“We are a rural-based business and will continue to support rural communities, bring families into rural towns and are actively supporting education through several programs that we have been running in Perth-based and country schools, with the aim of promoting agriculture.

“For the long-term we will continue to grow and invest in the latest technology and people and continue to act as a conduit between researchers, whether that be seed, fertiliser or chemical companies and growers.”