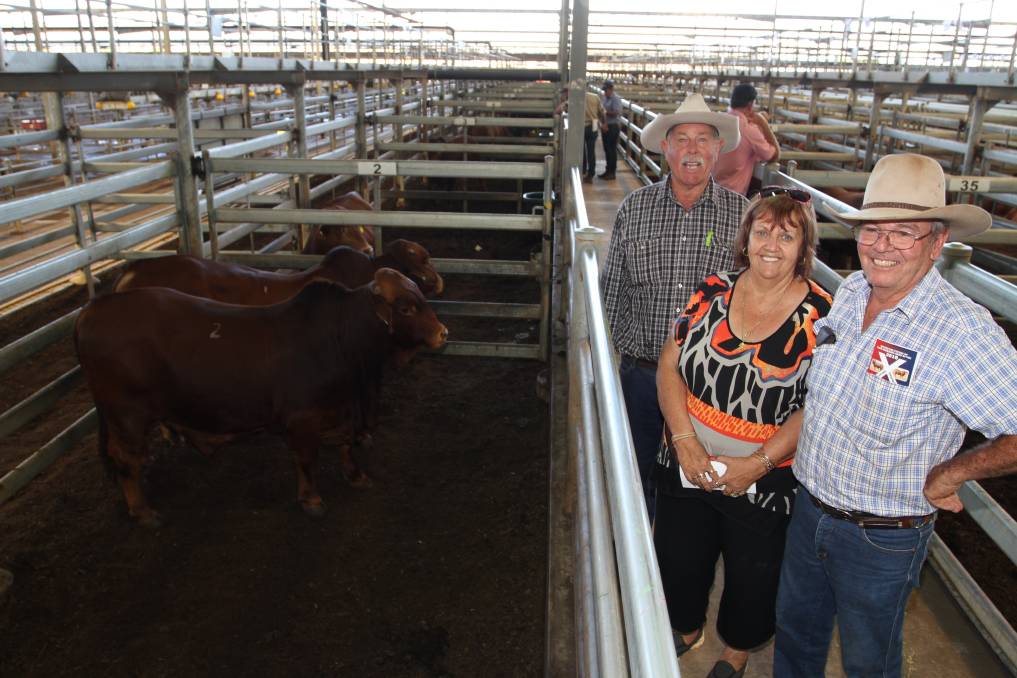 MUCHEA was the place to bag a bargain last Friday if you were in the market for a Bos indicus sire.

MUCHEA was the place to bag a bargain last Friday if you were in the market for a Bos indicus sire.

The Elders and Primaries teams did their best to encourage competition at the annual X-Factor Beef Production Sale last week but unfortunately the registered buyers list needed a few more names to help the results along.

All up 89 Droughtmaster, Santa Master and Santa Gertrudis bulls were offered at auction with 31 selling under the hammers of Don Morgan, Elders and Jay Macdonald, Primaries, to an overall average of $2919.

Overlooked bulls have since returned to their homes and producers looking for Bos indicus bulls are encouraged to contact the sale vendors for on-farm sales.

Elders auctioneer Don Morgan said it was a disappointing sale result on the day.

“There was nothing wrong with the bulls up for sale and the cattle market is strong so people should have been jumping at the opportunity to buy bulls at the sort of money we saw on the day,” Mr Morgan said.

“It was a tough sale,” Mr Macdonald said.

“The lack of rain in pastoral areas, including the Gascoyne, made for a lot less pastoral buying action and that always has an impact on sales like this.”

Top price honours was set at $5000 which was achieved by a Merryup Droughtmaster sire sold early in the action to Preston Clarke, Elders, bidding on behalf of Kookabrook Grazing Co, Pinjarra.

The sale top-priced bull was an April 2016 drop calf sired by Wajatryn Hunter D5 and out of Merryup 25/13.

Mr Clarke said he’d looked through the line-up of bulls pre-sale and the top-priced bull stood out.

“We were looking for a well-grown polled bull and this one fit the bill,” he said.

“He had a lot of depth, volume and was good on his legs and feet, as well as having a good temperament.

“He’ll go down to the Kookabrook operation at Pinjarra and will go over some Droughtmaster heifers.”

First to go under the hammer was the presentation of Droughtmaster bulls from Merryup stud, Mt Barker.

Bill Sounness offered a couple more than last year, bringing up 37 sires for the sale, up on 34 last year.

By the end of the run, 19 Merryup sires were on their way to new homes, including the sale top price getter at $5000.

The result was an average of $3092 paid per head, which was down on the $3789 average achieved last year, with the slight come back in line with general trends in the 2018 bull selling season.

Wanna station finished the sale with a team of eight Merryup Droughtmaster bulls paying from $2750 to $3250 for their selections.

Wanna station is a 400,000 hectare holding 240 kilometres north-east of Gascoyne Junction which incorporates the old Gifford Creek station and runs a Droughtmaster herd.

Mr Taylor said the season has been patchy across the property to date with some late thunderstorm activity but they were hoping for some winter rains.

“Generally the cattle are handling it well so we are not too bad,” he said.

The property musters in August to September with their bulls marketed to the Middle East, while cows and other surplus cattle are sold through Muchea.

Mr Taylor said the young sale bulls will be settled into their new home in a special paddock near the homestead with heifers before joining the main herd later in the year.

“They bought some bulls from Merryup privately last year and were happy with how they’ve gone so far, so that’s why we’re back buying again.”

Mr Hutcheson said it was good value buying on the day for bulls that will go out and do the job.

In the Santa Gertrudis offering, Merryup stud again presented the largest line-up with a total of 21 bulls up for grabs, two less than at last year’s sale.

Mr Hutcheson was also a volume buyer in the Santa Gertrudis offering and tallied up a few Santas to head to Gunnadorah station, along with the Droughtmasters he bought earlier in the sale.

“I’m happy with the quality of genetics and numbers we’ve been able to secure – we’ve filled the order.”

At the end of the sale, Mr Hutcheson had a total of seven Merryup Santa sires to load onto a truck with the Droughtmasters bound for station country.

The area is traditionally sheep grazing country but due to wild dogs, the Lefroys moved into cattle in 2009.

Mr Lefroy said they started off with a mixed herd and were still breeding and developing their cattle herd and working towards a full Santa herd in five to eight years.

He said like the entire Sandstone district, the weather at their property is extremely variable at the moment with some thunderstorms but no cyclone-generated rain events.

An increased offering of five Santa Master sires were presented by Tanglewood, with one selling under the hammer for $2500 to Minnie Creek station, Gascoyne Junction.

The Minnie Creek selection was a mid-June 2016 drop calf by a Hallmark Droughtmaster bull and out of a Tanglewood Santa cow.