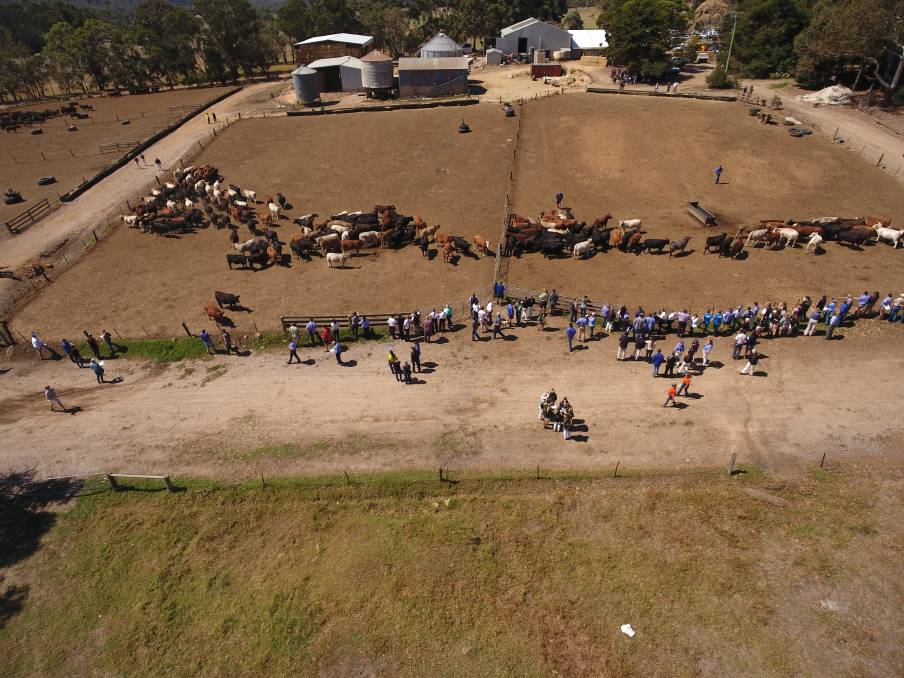 A look at the Harvey Beef Gate 2 Plate Challenge competition cattle from a different angle. In total there are 61 teams competing in this year's challenge and more than 200 people turned out to last week's field day to inspect their progress. Photo taken by drone supplied by Ed Riggall, AgPro Management.

INTO its fourth year, the Harvey Beef Gate 2 Plate Challenge attracted one of its biggest crowds ever to its annual field day held at Willyung Farms, Albany, recently.

INTO its fourth year, the Harvey Beef Gate 2 Plate Challenge attracted one of its biggest crowds ever to its annual field day held at Willyung Farms, Albany, recently.

With more than 200 people through the gate, the organising committee was overjoyed with the response to the field day and the continued interest in the competition.

This interest was further reinforced when more teams entered the competition than last year, with 61 this year, compared to 59 last year.

Teams comprise of one heifer and two steers and attendees at the field day were provided with an update of how these teams were performing in terms of weight gains after being weighed on March 13.

Sandy Lyon, whose Willyung Farms feedlot hosts the competition, said the weather had been ideal for fattening cattle.

“We have had a mild summer and this has led to good daily weight gains,” he said.

“It is clear that given the competition is in its fourth year, producers are improving how cattle are being presented and it was noticeable at the induction stage on January 8 that this was the best presentation of teams yet.

“The combination of this and the weather have seen weight gains up across the board compared to last year and it will be interesting to see the results at the end of the competition.”

“Most entrants performed some form of pre-induction regime with their teams this year,” he said.

“From induction, all cattle are treated the same and so the competition is fair and consistent for all producers.

The average weight for all cattle entered in the competition when weighed on March 13 was 447kg, with heifers averaging 444kg and steers 449kg.

The largest gain so far was found in a team of Sussex-Angus cross entered by the competition hosts, Willyung Pty Ltd.

The team has so far gained 145kg in total, with an average induction weight of 325kg going to an average weight of 470kg, when weighed on March 13.

Not far behind, with a weight gain of 144kg, was a team of Angus entered by Rayview Park Pty Ltd, Kalgan.

Also breaking the 140kg weight-gain mark was another team of Angus entered by SJ Panizza Family Trust, Albany, which gained 141kg in total.

This team registered a 352kg average weight at induction and had moved to 493kg on feed.

Other teams to perform well in the weight gain stakes was a team of Murray Grey-Sussex-Angus cross from Stuart and Sheena Smith, Narrikup, with a total gain of 134kg.

This team averaged 305kg at induction and had grown to 439kg on feed.

Another team from Willyung Pty Ltd was performing well weight-wise with the Sussex-Angus cross heifer and steers gaining 130kg in total.

The heaviest team at induction came from the WA College of Agriculture, Denmark, whose team of Angus weighed in at 393kg.

Second heaviest was a team from Rayview Park Pty Ltd, with a pen of Angus that weighed 386kg.

At the mid-March weighing, another team from Rayview was found to be the heaviest overall at an average weight of 526kg, while the Denmark Ag team was third at 522kg.

Harvey Beef livestock buyer Campbell Nettleton said it was a fantastic competition and Harvey Beef was eagerly awaiting the results in May.

“Congratulations needs to go to the producers,” he said.

“There has been a constant improvement of cattle entered in this competition since it began and when I inspected the teams in January, when they went into induction, you could throw a blanket over them, they were so even.

“Looking at them today, you could again throw a blanket over them as they are very consistent in quality and that is great to see.”