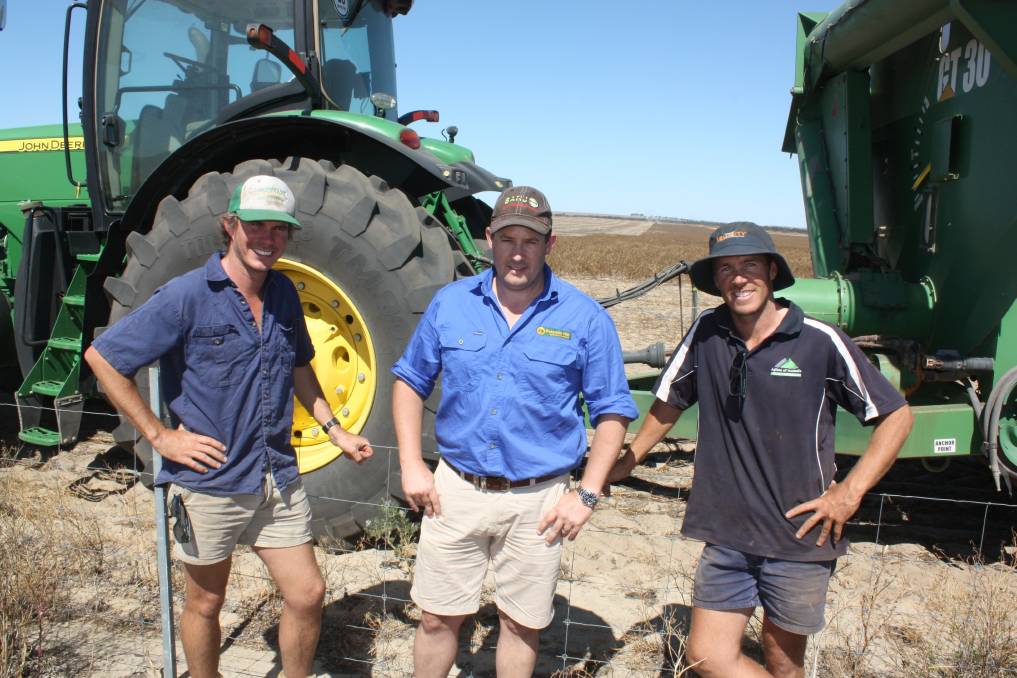 Mullewa south farmers Tim (left) and James Dempster flank Burando Hill Geraldton manager Johnathan Moss completed one of the last paddocks of lupins two weeks ago. "We finished better than expected," Tim said. "That August and September rain got us out of jail, particularly with the wheat. "Lupins finished better than expected while canola was on par. "We had a mid-year budget review and we're w

AUSTRALIAN wheat production could easily dip below the 20 million tonne mark for the first time since 2007-08, but there are pockets of the country where growers are being pleasantly surprised by yields.

AUSTRALIAN wheat production could easily dip below the 20 million tonne mark for the first time since 2007-08, but there are pockets of the country where growers are being pleasantly surprised by yields.

The national forecaster ABARES came out with an estimate of a 20.3 million tonne wheat crop in its most recent crop report, however the research for the figure was conducted prior to flood and frost damage in southern Australia.

ABARES has produced a total crop production figure of 34.9mt, down 41pc.

The damage may be counterbalanced to an extent by better than expected yields, in particular in western Victoria and WA.

The CBH Group expects the overall harvest in WA to reach 13.2mt, well up on its estimates of between 9.5mt to 10mt in September.

Farmers in Victoria and eastern South Australia are reporting similar slightly better than expected yields, although the rain event earlier in the month may bring yields back a touch for some.

Data to support theses claims is yet to come through, with both Viterra and GrainCorp enduring slower weeks due to rain delays.

The ABARES figures represent a 4pc drop on its September report.

The production forecast is around the long-term average and 2pc lower than the 10-year average to 2015-16.

ABARES executive director Steve Hatfield-Dodds said the season had altered in most regions since the last report, but on macro level climatic factors cancelled each other out.

Meanwhile, in ABARES’ Agricultural Commodities report, analyst Sarah Smith said world grain prices would remain at the low end of the spectrum in spite of a forecast 11pc lift in values, due to another big production year.

Ms Smith said any price gains would likely be in high quality, high protein grades, where supplies were tighter due to smaller harvests in Australia and Canada and Australian quality concerns following harvest rain.

In spite of strong deliveries of higher quality wheat and malt barley values for both commodities have only come back slightly.

The prices on offer for premium cereal products such as malt barley and H1 hard wheat are still at levels attractive enough to have growers selling in spite of modest falls.

“There was a bit of a fall in the protein market at the start of December when the weather event through south-eastern Australia was not as severe as first thought, but since then values have held relatively steady,” said Nick Crundall, Market Check domestic markets and pools manager.

Mr Crundall said with prices significantly better than at this time last year many farmers were taking the opportunity to sell grain.

“You can get prices of around $300 a tonne for H1 quality wheat and $290/t for H2 and farmers are seeing that as good value, especially where they have good yields in southern regions.”

“Many are saying there is not a lot of grower selling as yet, but the price is steadily coming back and that suggests there are some sales.”

Mr Crundall said the drop in cereal prices was markedly less significant than could sometimes be seen over the harvest period where grower selling led to a price slump.

He said the selling pattern was typical of the past few years.

Mr Crundall said there were pockets with significant amounts of off-specification wheat.

He said AH9, a high protein, high screenings and low test weight segregation opened up, was proving popular with buyers.

“You can get the protein at a price on par with ASW and it is a good wheat to blend,” Mr Crundall said.

The news has not been so rosy for canola producers with unsold product, with prices coming back between $30-40/t in the past three weeks to sit at around $500/t port.

Mr Crundall said the falls were in line with what was happening internationally.

“We’ve seen (French futures exchange) come back by around the same amount over the same time.”

Mr Stevens said most farmers had sold for cash when the prices were more than $500/t delivered site ($530-540/t port) but now some farmers were warehousing the product.