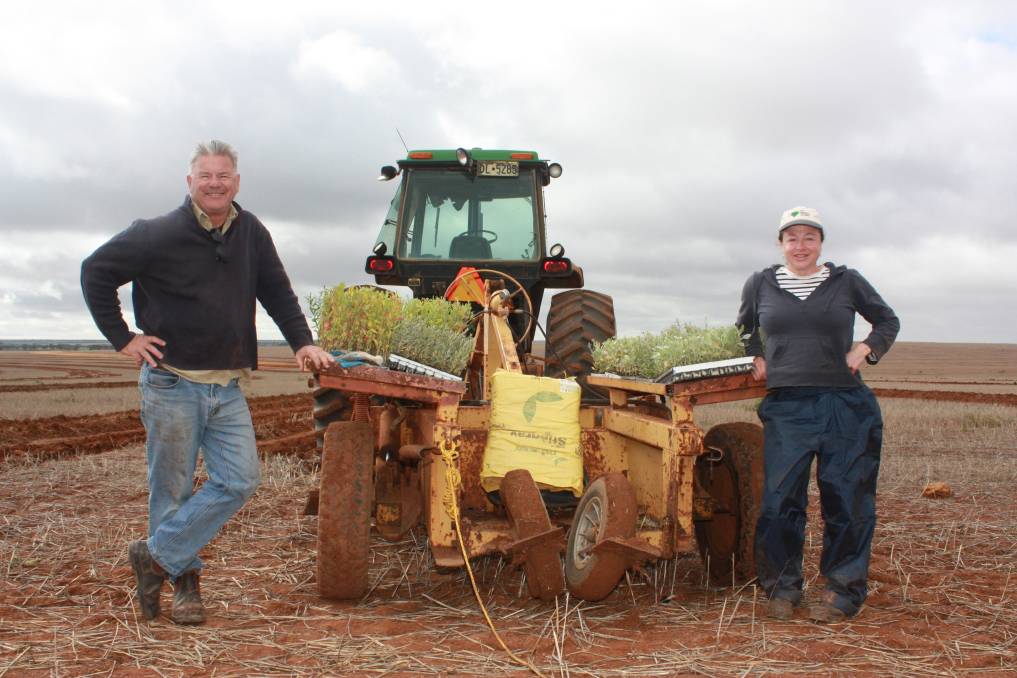 THE importance of farm diversification has been amplified in recent years, as dry winter conditions become an ever increasing challenge for growers in marginal areas of the WA grainbelt.

THE importance of farm diversification has been amplified in recent years, as dry winter conditions become an ever increasing challenge for growers in marginal areas of the WA grainbelt.

With a greenhouse established this year in Arthur River, the pilot site in Buntine is the next piece of the WOA puzzle.

The team is working with Buntine farmer and WOA non-executive director Stuart McAlpine on a three-zoned diversification project.

The idea is to split WOA’s 320ha property at Buntine into three zones – a cropped zone, a revegetated natural zone, and a combined zone – with a “four returns” philosophy.

The company measures its success through economic, environmental, social and inspirational gains, with hopes the four returns model will encourage growth and investment in the Wheatbelt.

The team has just completed planting 60,000 palatable native shrubs on its 100ha combined zone, which will eventually host a 300 head flock of sheep for rotational grazing.

A team of five planted a range of different shrubs – predominantly saltbush varieties – over five and a half days in mid-August after 18 millimetres of rain.

The seedlings were planted with two tree planters in an arced shape, in rows 2.5 metres apart, and inter-rows of 15m where perennial pastures will be sown next year.

The different rows will be fenced off to form five different cells, allowing livestock to rotate through each cell while giving the shrubs and pastures adequate time to regrow.

The grazing paddock will be available for livestock in two years, once the plants have established.

“We see it definitely as an option for drought mitigation in that it’s a permanent area of pasture and permanent area of feed, so definitely it could be applied further and increase stocking capacity on a property or it might enable someone to bring stock onto the property where they haven’t before,” Ms McInerney said.

“It’s a way of enabling risk sharing in drought years with cropping to have a mixed system.

“This is just one way of incorporating environmental diversity with vegetation but also economic diversity to mitigate risk.”

Ms McInerney said the site had received 8mm of since the shrubs were sown, an amount that should see them survive through the summer.

She said WOA’s vision was long-term, and the success of the project would be measured in a variety of ways.

“It’s a long-term goal so we might set something up now but we might not see a benefit for five years or 10 years,” Ms McInerney said.

“We’ll be running the figures, we’ll be monitoring things from an ecological perspective but also with the four returns it incorporates social and inspirational returns as well.

“At the end of the day if it means a system like this could create an extra job or if it provides something else that wasn’t there before then that’s also a gain.”

Mr McAlpine – who runs a mixed cropping, sheep and cattle enterprise at Buntine – said WOA’s diversification system had great potential in the Wheatbelt.

With WA weather patterns trending towards wetter summers and drier winters, Mr McAlpine said unlike winter crops, the mixed system would benefit just as much from rain in summer as it would in winter.

“You’ve got all of these things and everything is geared for that final event and if something goes wrong then you reduce your ability to make a margin on that cropping enterprise.

“If you’ve got a perennial based system and that’s the basis of your production then it doesn’t really matter when it rains, whenever it rains it’s going to benefit that system and it’s already there so you haven’t got planting costs.”

With the Buntine region enduring one of its driest starts to winter on record, Mr McAlpine said it was more important than ever that WA farmers turned to more sustainable agricultural methods.

He said WOA’s combined system was ideal for less productive areas of farmland.

“I think that a lot of our problems are compounded because of that lack of diversity that we once had in most farming systems and although we’ve seen a move to cropping for the obvious reasons in that there’s been greater profitability, that’s been at the expense of the natural capital in the soils,” Mr McAlpine said.

“I wouldn’t envisage that you would do it on all of your land, but I think on your lowest producing land you’d put back into a natural type system.

“Then on your higher producing areas you would still be cropping but I think we need to decrease the intensity and try and manage things a lot smarter, so we’re not so reliant on all of the ag chemical and the inevitable increase in cost due to resistance and decline in soil health.

“I see it as a much more resilient system financially that should be able to return stable returns rather than this boom and bust cycle that crop production is in.”

Another major driver of Mr McAlpine’s involvement in the project was his long-term engagement with the issue of regional repopulation.

He said working with WOA was a natural fit, and he envisaged more jobs being created in the region as the project progressed.

“It’s just really becoming hard to keep all of the footy sides going and all of the social infrastructure that is required to make you want to live there,” he said.

“That’s why I was very keen to work with Wide Open and Commonland on how do we transition from more of a regenerative approach so we can start regenerating the land, regenerating our communities, and regenerating that hope and inspiration that is always wonderful in rural communities.”