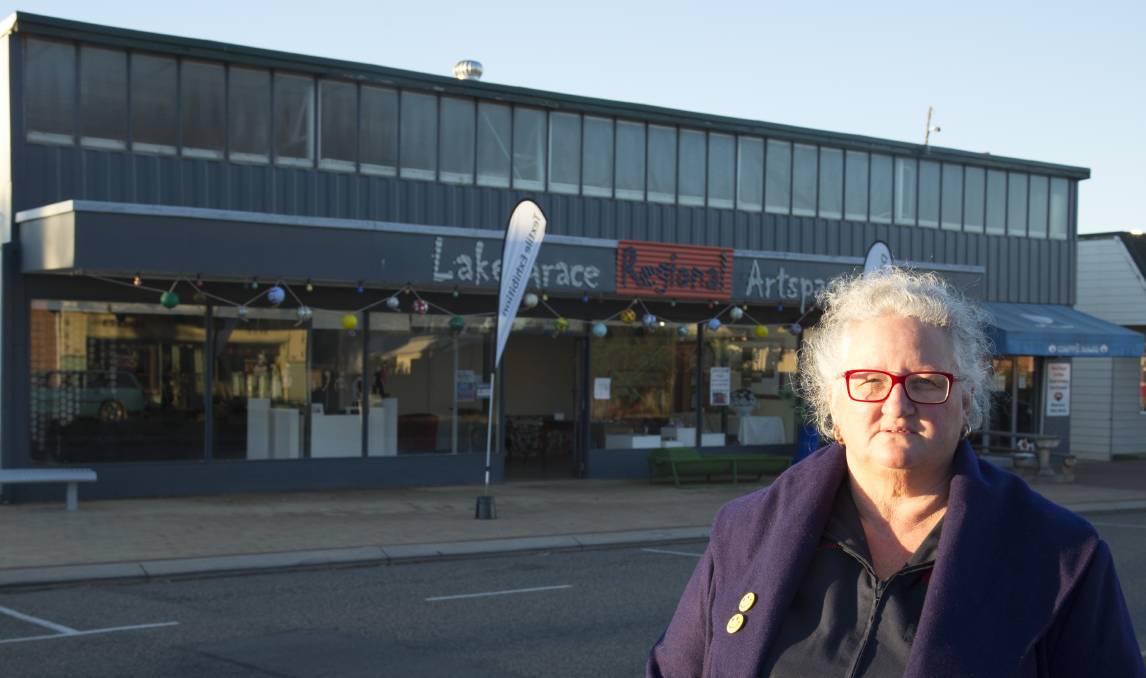 Lake Grace artist Kerrie Argent was instrumental in establishing a cultural and creative hub known as the Lake Grace Regional Artspace in 2003, together with fellow artist and business partner Tania Spencer.

LET’S state the obvious here – in the country tthere’s plenty of space.

LET’S state the obvious here – in the country tthere’s plenty of space.

But plenty of art space?

Now that’s hard to come by.

Unless you’re anywhere near Lake Grace, because thanks to two creative and talented locals, the Wheatbelt town now has a large art studio and workshop known as the Lake Grace Regional Artspace.

It’s a burst of colour exploding from the soul to uncover such a high calibre and standard of art being churned out of this humble regional studio, primarily by a group of locals known as the Lake Grace Artists’ Group.

The eclectic group has been functioning since the 1970s and still meets fortnightly at the space, with members hailing from areas such as Kulin, Wagin, Mt Barker and Narrogin.

Each member has their own preferences and strengths in using different mediums, something that group facilitators Tania Spencer and Kerrie Argent love to encourage.

“We have a very eclectic group of artists and we encourage people to do what they want to do,” Kerrie said.

“Other art groups only specialise in certain mediums, but we love that we have such a broad range of talent and aren’t just limited by one medium.”

Having such a deep pool of local knowledge and artistic skill to dip into is also something Tania is passionate about promoting.

“We are a group that encompasses multi-art forms, from landscape painters to textiles to 3D sculptors,” Tania said.

“By having this regional art space available, it provides a really valuable meeting place in our community.

“For those who aren’t involved in sport, this is another platform where people can engage with others and feel part of something.

“But most importantly, it’s also an activation of the arts in a regional area.”

The Lake Grace Regional Artspace evolved in 2003 when the art group felt it was outgrowing its smaller meeting place, so the women took it upon themselves to look for a bigger building.

The old Four Square supermarket was for sale, so Tania and Kerrie contributed the funds to purchase the building and establish their privately-owned and operated art space.

As two of Lake Grace’s most prominent artists who actively exhibit further afield, the women were keen to have access to their own creative space, which could also be used by the wider community in a multitude of ways.

They wanted to establish a creative hub for the region, a place where people could visit and peruse featured artworks, create their own masterpieces, attend workshops, exhibit and even sell their wares through pop-up shop events.

“It’s a great big space with a lovely ambience about it,” Kerrie said.

“Because we are run solely on volunteers, we have small window exhibitions on display all year round, which means we don’t have to have someone there the whole time.

“About three or four times a year we hold large exhibitions and aim to run four workshops a year, depending on interest and availability.

“We also get approached by different groups to use the space as it’s very versatile, and we were recently able to install a new kitchen to enhance its functionality.”

The new kitchen was the flow-on effect from the very clever idea to purchase and open a café in the adjoining building in 2010, Café Arjo, helping fund the cost of running the Artspace.

The creative ideas continue to roll in for this innovative and evolving space, as Kerrie and Tania hope they will eventually be able to host artists in residence at the Artspace, while also broadening their appeal with more music and performance-based art.

As for their own individual artistic talents and preferences, Kerrie primarily works in 3D sculpture, using recycled materials to highlight the wasteful nature of our society, and recently exhibited at the highly-acclaimed and popular ‘Sculptures by the Sea’ in Cottesloe for the third year in a row.

This year she created five large teepee-like structures made from donated knitted jumpers, entitled ‘Homeless’, to not only bring the issue of homelessness to light, but also the incredible amount of ‘fashion waste’ we are generating.

Tania prefers to work with wire the majority of the time, occasionally plastic and recycled materials, with an emphasis on industrial materials and creating costumes.

She has spent most of her life drawing and sketching, growing up with parents who were ‘makers’, with a mother who is a prolific knitter and father who works with metal.

Both artists are passionate about maintaining and building upon the creative foundations they have laid in Lake Grace, and for the first time this year, they have become involved in the Bendigo Bank Southern Art and Craft Trail.

The trail runs from September 16 until October 8 and features art exhibitions, open studios, workshops, demonstrations, artist talks and public art displays from more than 250 artists in the Great Southern.

“We want to keep growing, improving and evolving the space and what we can offer,” Kerrie said.

“We still have so many ideas, so there’s always something exciting happening.”