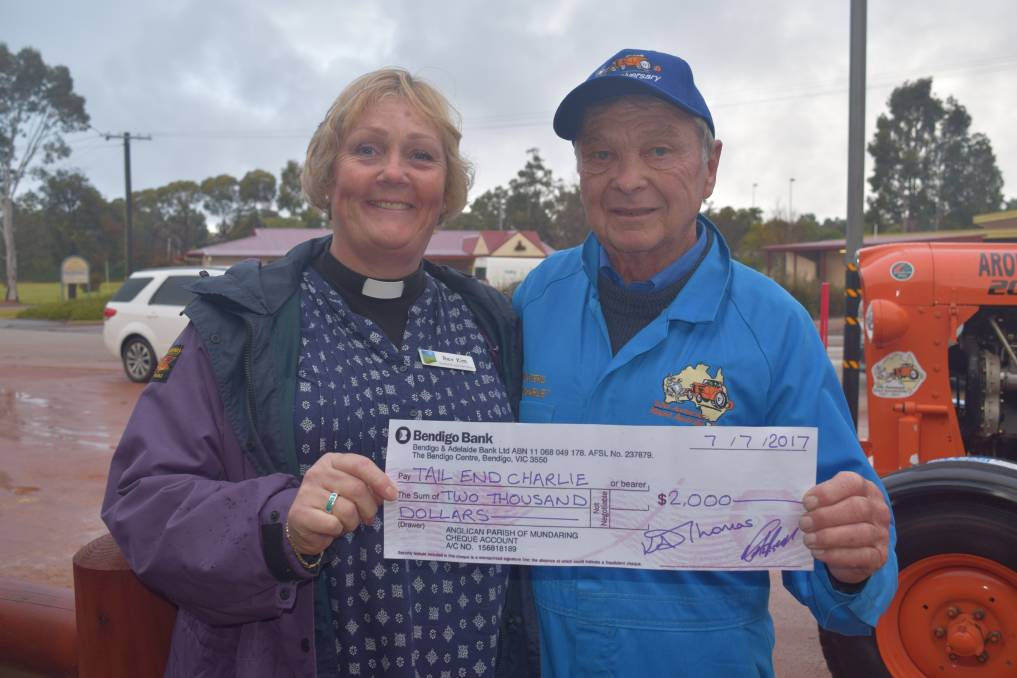 A RE-ENACTMENT of Tail-End Charlie can mean only one thing. And it’s almost an instantaneous connection for those like Ron Bywaters, who as a 22-year-old, took part in the 1957 Round Australia Rally.

A RE-ENACTMENT of Tail-End Charlie can mean only one thing.

And it’s almost an instantaneous connection for those like Ron Bywaters, who as a 22-year-old, took part in the 1957 Round Australia Rally.

That was the event that saw a 1955 Chamberlain Champion tractor bringing up the rear of the tour to help stranded entrants stopped with mechanical trouble or just bogged.

Recently, a new Tail-End Charlie team, including Ron, was given a special farewell by Wundowie and Northam residents as a 1962 Chamberlain Champion cranked up to replicate the original Tail-End Charlie route and to raise funds for cancer research.

The original journey took 19 days and covered 18,000km with modified gear that allowed a road speed of up to 100km/h.

In 2007, to mark the 50th anniversary, the 1955 model was brought out to do it all over again, thanks to the dedication and generosity of Gnowangerup owners Dick and Barbara Garnett.

This year’s event will cover 15,000km and take 57 days, due to the 50km/h maximum speed restriction for tractors.

Ron said the Chamberlain tractor, made in Welshpool, was one of the most popular tractors Australia-wide following World War II.

“They were and still are brilliant tractors,” Ron said.

The 82-year-old has a 160ha sheep and llama farm between Wundowie and Wooroloo and said most of the ‘Tail-End’ crew had farming backgrounds.

“We understand their problems,” he said.

“The tractor attracts them and having farming in our blood, we like to talk about their crops and stock.”

In 2009, Dick and members of the Chamberlain 9G Tractor Club of WA put his tractor and five others on a shipping container to North America to travel across the country.

“We travelled 7000 miles from Baltimore to Los Angeles,” Dick said.

“That was the experience of my life.

“Rural people are wonderful people and it’s the same anywhere in the world.

“For some reason they have got their feet on the ground.

“Some of them thought we were crazy but they opened their hearts to us.”

The 2007 ‘50th’ took 38 days and raised $22,000 for the Breast Cancer Association of WA and Prostate Cancer Foundation of Australia, which are also the chosen charities this year.

Ron said the crew hoped to beat the fundraising target set in 2007.

“We didn’t have social media or a website then, so we are hoping to collect a little more this year,” he said.

“We decided to not only celebrate the historical part but to also do something for communities throughout Australia.”

Ron said most of the crew had immediate family affected by cancer.

“When we travel around, we will be meeting lots of people and want to make sure they take responsibility for their health and have a regular medical check up,” he said.

“Early detection means early treatment and you have a far better chance of that treatment being successful.”

He said the crew paid their own expenses and every dollar donated would go to prostate and breast cancer research.

Crew members Steve and Barbara Hill flew in from England for the trip and left with the team on Friday along with Dandaragan farmer Jeff Fordham and Bullsbrook resident Derek Henderson.

Steve and Debbie Day will fly in from New Zealand to meet the crew along the way and George Baldwin will hop aboard in Smoky Bay, South Australia.

“We have international crew and local crew so it adds a bit of flavour to the whole trip,” Ron said.

If all goes to plan, the tractor will roll into the Dowerin GWN 7 Machinery Field Days on August 30-31 to end the journey.

It will be at the Northam National Ballooning Championships in September with other tractors showcased by the Chamberlain 9G Tractor Club of WA.

The original Tail-End Charlie is retired and is on display at Whiteman Park in the Swan Valley.

To donate or for more information visit tailend charliethetractor.org.