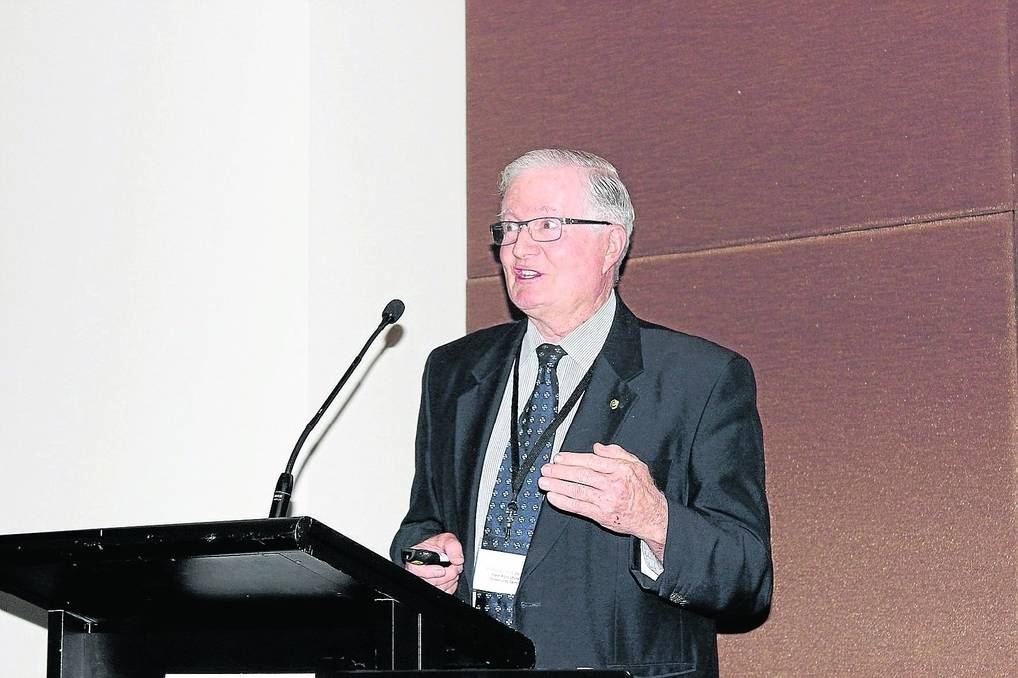 Wheat breeder and researcher Ian Edwards speaking at the PGA?convention.

While GM wheat will be "essential in the future", respected researcher and conventional wheat breeder for 50 years Ian Edwards believes market acceptance and commercial timing will govern its release rather than promised repeal of the GM Crops Free Areas Act by the end of the year.

He put his views on GM crops to the Pastoralists and Graziers Association (PGA) annual convention and was roundly applauded.

A science-based supporter of GM and chairman of the AgBio advisory group in AusBiotech, the biotechnology industry's national organisation, he was involved in successful but ultimately stymied development of GM salt-tolerant wheat and WA's first GM crop field trials in 2005.

Having advised both Federal and State governments, Dr Edwards has been in a unique position to view the ideologies and politics controlling approval for GM crops in Australia since 1999.

He was a member of the federal Biotechnology Consultative Group 1999-2000 which advised on the Gene Technology Act 2000 and regulations the following year which set up the Office of the Gene Technology Regulator (OGTR) and saw all States sign an intergovernmental agreement on GM.

Dr Edwards described that Act as "amazingly robust" and "very open" with anyone able to obtain information on where GM crop field trials are being conducted.

He was invited onto a committee in 2006 to advise then State agriculture minister Kim Chance on GM-related agronomic and marketing issues and the affect of the State's GM Crops Free Areas Act.

An Agriculture Region MLC, Mr Chance was agriculture minister between 2001-08 in the Gallop and Carpenter Labor governments.

In 2003 the Gallop government enacted the GM Crops Free Areas Act prohibiting planting of GM crops without a ministerial exemption.

He described his time on the committee as "almost a tragedy".

He said a draft paper the committee put out on GM Canola was a "mixture of science and absolutely speculative fantasy" such that he and other committee members asked that their names not go on it.

Committee members also foresaw potential for lawsuits some nine years before the Baxter/Marsh case, he said.

Dr Edwards said the GM Crops Free Areas Act was "a totally unnecessary piece of legislation" and the "moratorium" on growing GM crops in WA was not needed because federal legislation gave the State a right to choose not to market something it considered damaging.

"It significantly decreased private investment and we can quantify that - Queensland Labor premier Peter Beattie was a supporter of GM technology and it went forward in Queensland which attracted a lot more funding for research, in particular GM research (than WA).

"It reduced farm income and denied canola growers a choice.

"It undermined the OGTR because national policy was supposed to be consistent.

"There are still issues that remain - the WA Labor Party still has a policy that opposes the growing of GM crops. This is in contrast to federally, and in Queensland, Victoria and NSW Labor.

"They've given themselves a real stretch goal, they've said 'How about 25mt by 2025?' That's the kind of way they have moved forward."

It was important to remember, he said, Canadian farmers were already 13 years ahead in experience with GM canola before WA farmers first had an opportunity to grow it.

The global value of biotech seed was US$15.3 ($20b) billion last year - 20 per cent of the total world seed market with a "preponderance of that value" captured in industrialised rather than developing countries, he said.

Added farmgate value to GM crop producers was "closer to US$20 billion" ($27b), he said.

It was 22 years since Flavr Savr tomatoes were used in sauce promoted in the United Kingdon as being genetically modified.

"It's a sad reality that the same propaganda issues we are having to deal with today is the same discussion we were having some 30 years ago when we first started addressing biotechnology, nothing changes," Dr Edwards said.

Because of that, it was "not going to be easy" to introduce GM wheat, he said.

"A lot of people who write (letters to Farm Weekly) about repeal of (the GM Crops Free Areas Act) think that it will suddenly lead to GM wheat, but that won't necessarily happen in the short-term.

"We will only produce and recommend it for marketing when the time is right on the global scale."

As an example, Dr Edwards used his own company's experience in 2005 with a gene from arabidopsis, a wild relative of canola, which produces proline, an amino acid that confers a degree of tolerance to salt stress.

It ran field trials at Corrigin using Westonia and Carnamah wheat with and without the gene in saline soil, which showed a 20pc yield advantage with the gene and a corresponding loss without the gene, he said.

"We had done glasshouse tests which showed we could actually grow wheat in 60pc seawater, so the gene worked extremely well, but we had to discontinue the research because of a lack of funding.

"Some of the funding bodies got pretty gun shy, we had some pretty bad public policy at that time and certainly a minister who was not the slightest bit supportive.

"We got too far ahead of ourselves as researchers at that time.

"The world market just wasn't there and ready for it and so politically public policy would not have supported it."

Dr Edwards said the technology still "sat on the shelf at Murdoch University" and similar field trials conducted six years later by Adelaide University - also at Cunderdin - did not result in a commercial variety either, partly through a lack of State government support.

"Wheat is not only a strategic food crop but its widely traded and GM wheat will be essential in the future," Dr Edwards said.

"If we fail to embrace technology there are some very clear and cogent lessons around the world as to what could happen.

"Europe is the classic example, a total basket case, it's not a science-based policy, they disregard their own regulator, the European Food Safety Authority, and they make political decisions.

"The result of it is companies have left Europe and relocated to the United States.

"It's truly important for us, I believe, that we retain a science-based focus on genuine risk and a focus on our markets and our customers as we move GM crops forward."

Dr Edwards prefaced his comments to the PGA by stating: "I own no shares in any life science company, I own no patents in the biotech sector and I don't stand to make a cent through bio success, but what I do stand for is making sure good technology gets to the field."

Over his career Dr Edwards has been involved in the development and commercial release of 53 new wheat varieties on four continents - Tungsten being the latest.

He obtained bachelor and masters degrees in science from University of London and a science doctorate from North Dakota State University (NDSU).

He is a fellow of the Crop Science Society of America and in 2003 was awarded a doctor of science degree from NDSU for his contributions to genetic research, including development of spring wheat varieties predominant in the US in the 1990s.

He worked for Pioneer Hi-Bred International Inc in Des Moines, Iowa, for 22 years where he was worldwide director of field crops research, before moving to Perth in 1998 to start Grain Biotech Australia and later Edstar Genetics.