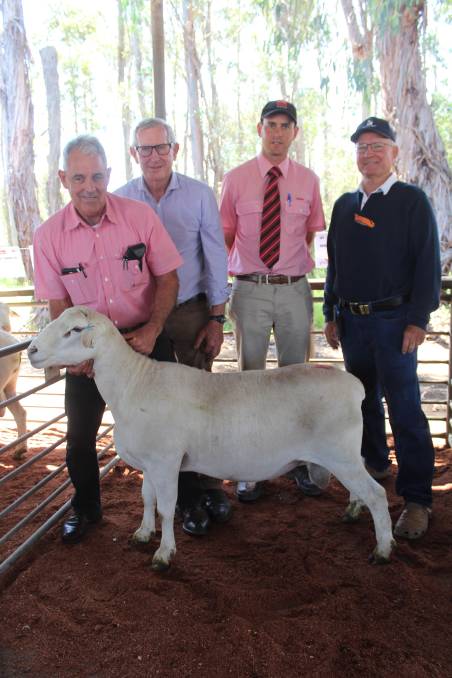 SHEDDING breed ram sale results took a slight tumble this year on the back of the rising popularity of wool.

That said, with the final numbers in from sales of Dorper, White Dorper, Kojak, UltraWhite and Lambmaster rams, the results were far from negative, with the overall average price per shedding ram down by only $92 on last year.

There were three total clearances achieved in the shedding breeds this year, two of which were at Dorper sales and one in the inaugural Lambmaster offering of 12 sires.

This year three studs offered Dorper rams at auction in WA, with a positive result for the breed recorded by the end of the selling season.

Between Douwana, Ida Vale and Kaya Dorper studs a total of 114 rams were offered, 19 less than last year, but 12 more sold with 108 Dorper rams going to new homes after the hammers fell.

The strong average result was largely due to the result posted by the team of 45 Douwana Dorpers offered at the annual Chapman Valley Breeders ram sale this year.

These achieved a total clearance after meeting with fierce competition from some eager buyers who pushed the average price per ram to $1833, representing a rise of $718 in average for the Douwana stud and the highest average posted across the Dorper and White Dorper breeds, aside from the single $5000 White Dorper sold by KD Genetics at the IGA Perth Royal Show.

But the Douwana team didn’t earn total bragging rights, with the largest offering of 49 Dorpers presented by Kaya Dorpers selling to a total clearance, as well as achieving the breed top price of $6100.

The top-priced Dorper was knocked down to Roy Addis, Landmark Breeding, who was taking instructions over the phone from regular Kaya buyer Mark Cullinin, Kelleen Holdings, Wentworth, New South Wales.

Douwana achieved a top price of $3400 at the Chapman Valley sale, while Ida Vale saw a top of $1000 paid at its sale.

All three Dorper sales saw their clearances under the hammer improve, with Ida Vale’s clearance of 70pc rising the most, up by 34pc, while Douwana improved 3pc and Kaya improved 15pc.

In the White Dorper sales in WA this year, things were fairly steady on the 2017 sale results, with the same amount of rams offered and only three less sold when 115 of 158 were cleared at auction.

The average per ram across the six White Dorper sales this year was firm on the previous season, down by just $1 at $1119, with increases in sale averages at four fixtures aiding in the effort.

This year’s top-priced White Dorper sold under the hammer in WA was from the Kaya stud, selling for $6900 to an online bidder via AuctionsPlus.

It was also the second top-priced shedding breed ram sold at auction in 2018.

The Kaya stud also posted the best individual average at White Dorper sales this year at $1290, up $100 on last year, following the $5000 average posted at the IGA Perth Royal Show when KD Genetics sold the only White Dorper ram in the sale for the amount.

Ida Vale posted the next highest average in the White Dorper sales at $1109, representing a $53 increase on last year, also achieving the highest individual gross this year at $62,100.

Three other shedding breeds were presented at sales in WA this year, including one new addition.

Collectively BreedersBEST Kojaks, Hillcroft Farms UltraWhites and Broun Garnett Lambmasters took a dip in the numbers, selling a reduced clearance of 254 from 298 rams offered on the back of the 2017 total clearance.

Despite lower prices in comparison to last year, looking at the individual sale results these shedding types still made good money at auction.

Overall top-price honours across all shedding breeds this year went to the newly introduced Lambmaster breed, with 12 sires offered and sold at the equally new inaugural Elders South West Invitational ram sale which topped at $8800.

The ram was purchased by Gary and Judy Doyle, Montara station, Wentworth, New South Wales, with Mr Doyle saying he was impressed by the ram’s overall conformation and strength.

The third top-priced shedder of the year behind the Kaya White Dorper was the $6600 top-priced ram sold at the Hillcroft Farms UltraWhite sale.

The top-priced Kojak ram sold by BreedersBEST this year sold locally for $6000 to Bruce Clarke, Goomalling.

Looking to individual sale averages, all three sales individually performed better than every White Dorper and Dorper sale, with Lambmasters averaging $3625 (12 sold from 12 offered), UltraWhites averaging $2130 (155 sold from 189) and Kojaks averaging $1590 (87 sold from 97).

In terms of clearance, the three breeds collectively saw 85pc of the 2018 yarding sold under the hammer, back from the 100pc clearance last year.