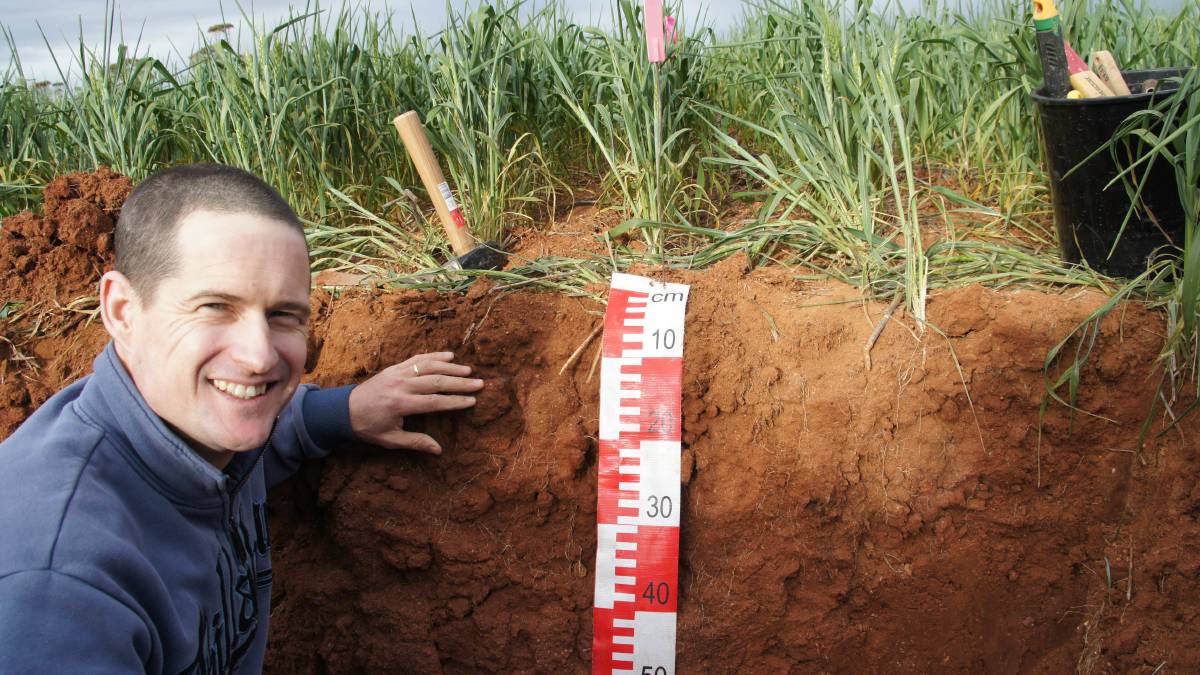 DPIRD research officer Wayne Parker assesses root development in a red non-cracking sodic clay, three years after it was deep ripped with topsoil inclusion, as part of a research project to investigate the use of topsoil slotting plates.

GRAIN growers with compacted sandy soils could achieve yield improvements of more than 35 per cent by using topsoil slotting plates in association with deeper ripping, according to recent research.

Topsoil slotting is thought to enhance and prolong the effect of deep ripping, when combined with controlled traffic farming, enabling plant roots to penetrate into the clay.

There has been increasing interest from growers in the use of topsoil slotting plates, however, questions remain about the benefit relative to the additional cost.

DPIRD research to address these and other questions was profiled at the National Soils Conference in Canberra last week.

Mr Parker said the results varied depending on crop type and seasonal conditions.

“Topsoil slotting provided a positive response at both sites in 2015, allowing plant roots to access moisture at depth during a hot spring, resulting in an 83 per cent yield increase in canola at Moora and an 18pc yield improvement in wheat at Binnu,” Mr Parker said.

“2016 saw a 33pc increase in barley yields at Moora, while at Binnu the increased lupin biomass generated by deep ripping ended up producing excess shade that limited yield improvement to 9pc.

“Yields in the northern trial were compromised in 2017 by the late start to the season, low rainfall and hail damage, resulting in a negative response in wheat at Binnu, however lupins increased by 54pc at Moora.

“Topsoil slotting plates appear to have had a positive influence across three years, with the best responses in the first two years after application.”

DPIRD is preparing to harvest the final year of these trials, while complementary trials on different soil types will continue in Ravensthorpe and Salmon Gums.

Mr Parker said while topsoil slotting plates had a role to play when ameliorating soil compaction, theirSlotting plates a boost for sandy soils use would have to be considered carefully alongside the cost of the application.

“In addition to the cost of the plates, the extra drag adds 20pc to the energy cost of towing the ripper, not to mention the extra wear and tear on machinery,” he said.

“It is also important to note that soil compaction is only one of the soil constraints present in sandy soils.

“Subsoil acidity and soil water repellence continue to be costly constraints, which are not remedied by deep ripping.

“To get the most from the increased cost of plates, it is better to have the topsoil pH amended prior to slotting to assist subsoil pH amelioration.”