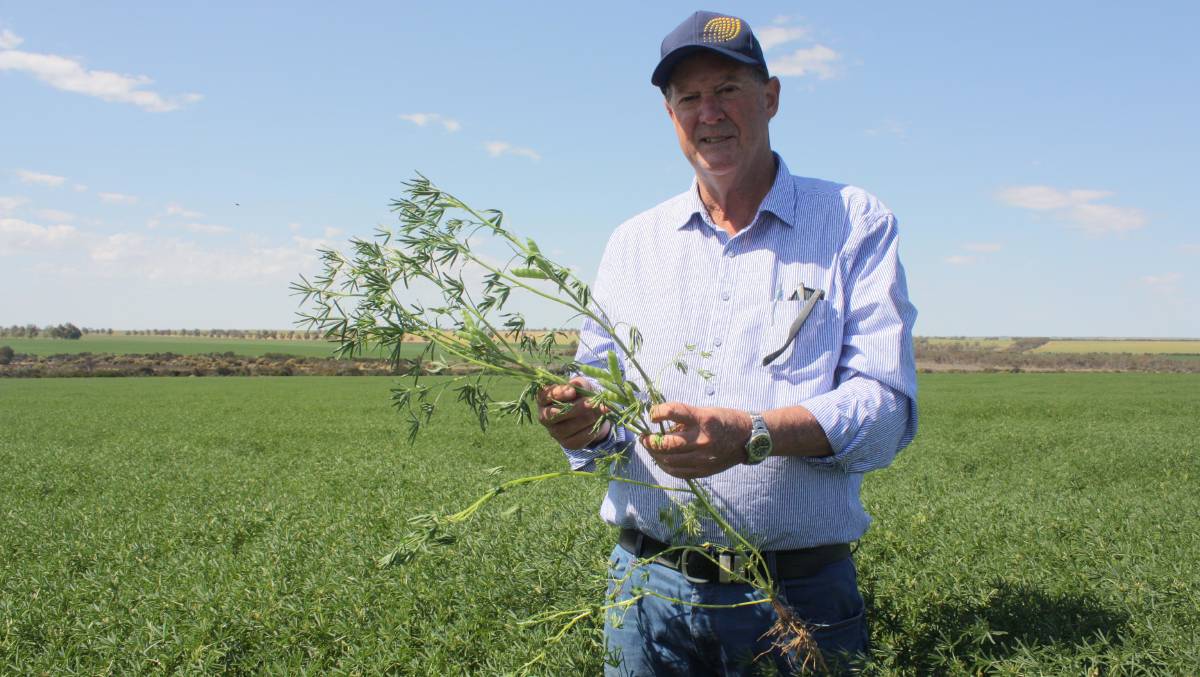 Coorow farmer Rod Birch is one of the growers of The Lupin Co who shares a passion for lupins and has long vouched for their potential for human consumption. Lupins are an essential part of his farming operation which also involves wheat, barley and canola.

Have you been in the ‘lupe’ about what is set to be the next big superfood?

HAVE you been in the ‘lupe’ about what is set to be the next big superfood?

It has more protein and less carbohydrates than any of its alternatives, including quinoa, chickpeas, wheat and rice.

Traditionally used as feed for livestock, sweet lupins have been making their way into the global market for human consumption.

The Lupin Co has been at the forefront of forging this movement with a focus on providing consumers with a versatile, tasty and highly nutritious product that simultaneously has numerous benefits for the farmers that produce them.

As well as providing WA growers with a good return on their lupin crop, which is more than they would make than producing lupins for stock feed, lupins are a sustainable legume that break the cycle of cereal root diseases while maintaining and even increasing soil fertility.

The benefits in the paddock don’t end after harvest, as lupin stubble can be used as valuable stock feed.

According to Pulse Australia, various studies have evaluated the benefits of using pulse crops in a rotation and found that when grown in a rotation with pulses, cereal and oilseed crops, they yield a higher 0.5 to 1 tonne per hectare and protein can be increased from 0.5 per cent to 1.8pc.

The Lupin Co managing director David Fienberg said the company had been channelling lupins into the niche health food market with great success.

“When we talk to our customer base, they want high protein, high dietary fibre and low carbohydrate foods and lupins have these characteristics, which makes them stand out from other proteins on the market,” David said.

“It is also a natural protein that comes straight out of the paddock and can be eaten raw.

“This is unique globally because every other protein is highly processed.”

In a time where gluten intolerance seems to be rearing it’s head on a regular basis,  lupins which are gluten free, offer an alternative which is more nutrient and fibre dense than well-known options, such as quinoa.

Being high in protein and fibre, lupins provide consumers with a feeling of fullness with fewer kilojoules, meaning one eats less while still being satisfied.

“Our aim at The Lupin Co is to leverage off those natural attributes of high protein and fibre, low carb and minimal processing to incorporate them into ready-to-use products,” he said.

The core product of The Lupin Co is lupin flakes which David said were an easier and more versatile ingredient to cook with compared to flour.

“Lupin flakes can be incorporated into many applications, such as for baking, salads, turned it hommus and even couscous,” he said.

“The difference between using flakes and flour is that flour is super fine and can become stodgy because it aggregates, whereas flakes hydrate in three minutes unlike any other legumes.”

David’s passion for lupins was sown when he worked with the CBH Group in a joint venture with George Weston Foods many years ago but the lupin movement didn’t quite take off. 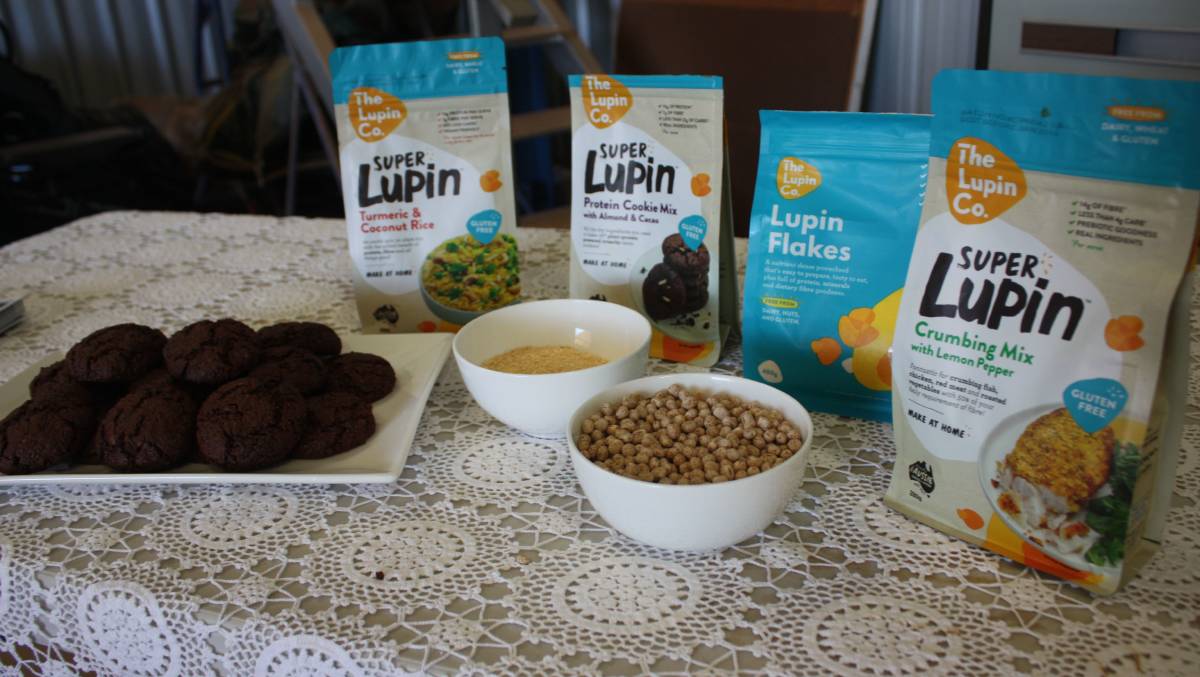 Since then David and his wife Lee-Ann have been spearheading to make the world realise just how great lupins are as a food product that also benefits growers.

The Lupin Co has been recognised for its work in promoting this sustainable WA legume and has won many awards over the years.

At the heart of The Lupin Co are the farmers that grow these quality lupins that consumers have been raving about.

In fact they are more than just growers to The Lupin Co, but shareholders in the business so consumers end up directly contributing to the people who made the product while also benefiting their farming program.

“Our partnering farmers’ passion for lupins is just as strong as mine and Lee-Ann’s,” David said.

“Having some equity in the business connects them to what I think will be a turning point for Australian agriculture.

“As well as the great health benefits, lupins offer so much in sustainability in terms of soil health and help reduce the use of chemicals in paddock.

“When combined with the opportunity to offer farmers a chance to increase the value of a current commodity, it even makes the hairs on the back of my neck stand up just talking about it.”

One of the growers involved with The Lupin Co is Rod Birch, who owns and operates Catalina farms at Coorow and has long championed the power of lupins in terms of their nutritional value and their role in farming systems.

Having been growing lupins for 35 years, Rod jumped on the band wagon to produce lupins for human consumption about four years ago.

Lupins make up a crucial part of his farm business and he plants 1000 hectares to 1600ha every year which complements his canola, wheat and barley crops.

“Growing lupins in my farming system is an essential rotational break crop, providing disease and weed control along with valuable nitrogen fixing for the following crops,” Rod said.

“Following wheat crops are always the highest yielding and have improved protein and quality.”

Lupins grow well in the various areas of WA but with reliable rainfall, no frost or water logging and warmer spring temperatures, Lupins thrive on Rod’s farm.

His lupin program is grown under the same management protocols as the rest of his cropping enterprise.

“A percentage of the annual production is dedicated to The Lupin Co and the balance is either stored on-farm or delivered directly to our long-term commercial customers,” he said.

“As a long-term lupin grower convinced of the nutritional benefits lupins had to offer, I had long been supportive of taking lupin processing to a higher level of appreciation as a food inclusion.

“I was therefore a foundation member of The Lupin Co and grow Quality Assured (QA) lupin grain for processing.”

Rod and David both share a pure fascination and excitement for lupins and with the exceptional qualities of this ‘golden grain’, it seems it won’t be long until the world develops that same passion too, if it hasn’t already.

“Lupins can’t just be for Australia, they have to be taken to the global market,” David said.

“It is such a fantastic opportunity to try to help Australia break the paradigm of being ‘price takers’.

“It will take a lot of time and there’s no doubt there’s more effort to go into it to drive more sophisticated ready-to-eat products but we have made a start so now it’s just one step after the other.”

The Lupin Co has already made great groundwork on this with customers in New Zealand, the United Kingdom and the United States - which it is about to ramp up – and it has a strong presence in South East Asia, including Singapore, Hong Kong, Thailand and Vietnam.

“Those Asian neighbour options are probably going to give Australia as good an opportunity that selling into the US and western European markets would offer,” he said.

David said that WA farmers might have a challenging road ahead over the next five to 10 years with the Black Sea and other areas driving commodity prices, so The Lupin Co aims to differentiate itself for long-term viability.

“It is important to have a point of difference where the economics, providence, traceability and the product is better,” he said.

One of the most prominent food movements in recent times has been for consumers to understand the paddock-to-plate story and The Lupin Co aims to deliver that to its customers.

“All of the farmers that we work with run fascinating and professional operations which enables us to talk confidently to our customers about the level of care and attention that goes into producing the product,” David said.

“When dealing with international customers, taking them to great WA farms gives them a strong impression about the quality of people they are working with and that has been critical in our business.

“To have growers that supply and support The Lupin Co in many ways with advice and other things enables us to tell the story that connects people to the product, but also where it comes from.”

There are other companies doing similar work to The Lupin Co in trying to promote and sell WA lupins to domestic and international markets.

Increased processing capacity and more demand for WA-grown lupins could help lift the price and stimulate further production for this golden legume.