A year of more skinny milk without much cream on top was how most of WA’s dairy farmers found 2018.

A YEAR of more skinny milk without much cream on top was how most of WA’s dairy farmers found 2018.

But, with the range of choices on offer, it tended to require some quiet time on the computer with the farm’s month-by-month production data and a calculator for dairy farmers to work out by exactly how much.

A difficult season with lack of rains through autumn and well into winter before a late break, stretched most farmers’ feed stores to empty and high feed bills did not help their diminishing bottom line.

For many WA dairy farmers 2018 had started with plenty of optimism after two unsettled years of strained relations with two of the State’s three milk processors.

One of those processors, Brownes Dairy, had been sold late in 2017 and was starting the new year back under control of an owner with extensive dairy industry experience – albeit in China.

For the previous six and a half years, WA’s oldest dairy company had been operated as a toe-in-the-milk investment experiment by an Eastern States venture capital outfit accustomed to greater returns than an isolated, growth-restricted WA dairy industry could muster.

The Australian Competition and Consumer Commission (ACCC) dairy inquiry report was due in April and there was hope it might level up the contract negotiating table between farmers and processors.

Adding to this optimism was a January prediction by business analysts for IBISworld that 2018 was to be the year the dairy industry “bounced back”.

IBISworld listed dairy farming as third in the top five growth industries for 2017-18, with an expected eight per cent growth in national farmer revenues.

But by February optimism had started to wane.

It became known Parmalat-owned Harvey Fresh had given the State’s biggest milk producer, the Lactanz aggregate of four farms at Scott River producing 20 million litres a year and owned by another remote investor operation, Australian Agribusiness Group (AAG), formal notice it was not renewing supply contracts on July 1.

At a 2017 Western Dairy forum AAG head Marcus Elgin had outlined plans for major infrastructure upgrades at the Lactanz farms’, foreshadowing a significant lift in production volumes, but that did not fit Parmalat’s plans for Harvey Fresh which does not have a bulk white milk supermarket contract like the State’s other two processors.

News Parmalat was dropping Lactanz triggered a fresh round of approaches to smaller farmers who might be prepared later in the year to move from one processor to another.

A Parmalat supplier less concerned with industry machinations than others was Paul Miller, Cowaramup.

He and his family had taken control of their dairy farm’s destiny some years earlier by reserving a small proportion of their milk production for their own boutique on-farm ice cream business. 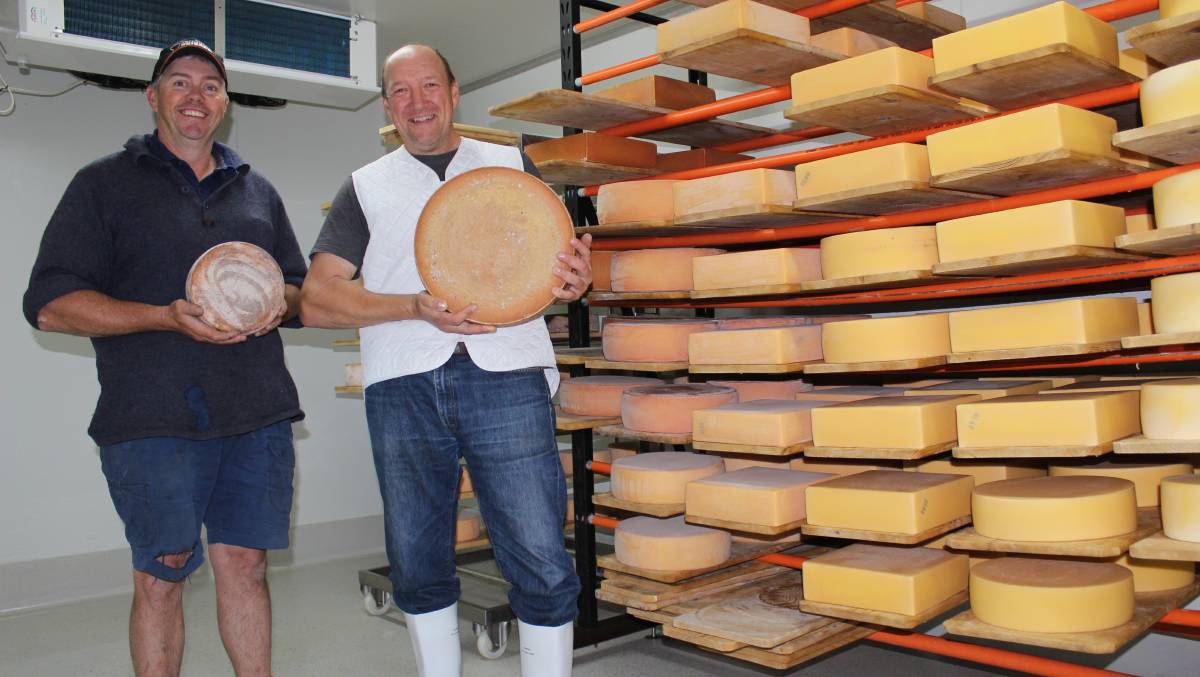 The end of school holidays freed Mr Miller, the public face of Millers Ice Cream, from a daily ritual of milking ‘Precious’ the cow for tourists and he could concentrate on farming and planning a proposed expansion of Millers Ice Cream beyond the South West.

Tutunup farmer and agronomist Tammy Negus, who took on a workforce development role with Western Dairy, attended her first Australian Dairy Conference courtesy of a bursary from the Australia’s Legendairy Women’s Network.

Mr Vogel buys milk to make his cheeses straight out of the vat at the robotic dairy of near neighbours Malcolm and Kellee Hick.

In April, Western Dairy awarded a scholarship to University of WA PhD student Shilja Shaji to help fund research for her thesis on ways to identify individual dairy cows most likely to suffer from heat stress.

At the end of April the ACCC released its final dairy inquiry report, with the major recommendation of a mandatory code of conduct. Coupled with WA’s relative isolation, this left a local industry primarily focused on drinking milk with no real competition between processors for supply and little opportunity for growth, the ACCC said.

“Processors have little incentive to invest in expanding capacity when faced with flat demand and higher costs of farming,” it said.

The report also angered famers by maintaining there was no direct link between $1-a-litre supermarket milk and low farmgate prices.

There was no direct link, the ACCC said, because farmers were paid the same for their milk whether it went into a $1-a-litre product or more expensive product.

WAFarmers dairy council president Mike Partridge rejected this argument, claiming $1-a-litre milk provided processors with volume but not profit and created downward pressure on farmgate prices already so low they were forcing dairy farmers out of the industry.

More than 300 dairy farmers and dairy industry equipment and service provider representatives attended the event which was followed by an industry dinner in Bunbury sponsored by Lion Dairy and Drinks.

Boyanup farmer and former Western Dairy chairman Vic Rodwell was named Lion Dairy and Drinks’ Farmer of the Year, selected as the best of the company’s 550 milk suppliers around Australia.

Mr Rodwell and wife Denise, who run Rodwell Farms producing over six million litres of milk a year, were flown to Sydney to accept the award at a gala function on a boat on the harbour.

May ended with a warning from RaboResearch senior dairy analyst Tom Bailey “millennials and generation Z”, the main consumers of alternatives to dairy products, trusted dietary information from peers and other influencers over professionals.

The dairy industry could learn lessons in marketing and relating to consumers from the rise of dairy alternative products, Mr Bailey said in a report titled Dare Not to Dairy - How the Industry Can Respond to the Rise of Dairy-Free Dairy.

In June Lion Dairy and Drinks announced its 29 suppliers would receive a weighted average milk price for the 2018-19 year of 50 cents a litre.

Brownes and Parmalat do not make their pricing public but it was acknowledged by farmers that Lion’s price continued to be better than the other two processors, although Brownes’ new price schedule listed the highest summer production incentive of 61c a litre for the three months.

Actual monthly prices paid to some farmers for their milk were closer to 40c/l than to 50c/l through the spring flush.

On July 1 the four Lactanz farms at Scott River became a Brownes suppliers once more.

Under the previous New Zealand owner, the farms had supplied Brownes but receivers negotiated the move across to Harvey Fresh.

Lion Dairy and Drinks completed a $43 million three-year upgrade of its Bentley Plant without fanfare in July.

It included a new filling line and a new centralised despatch cold store to replace distribution depots at Balcatta and Palmyra sold off to help pay for the upgrades. Palpable relief showed on the faces of Western Dairy board members and senior management at a Busselton dairy conference at the end of July when Regional Development, Agriculture and Food Minister Alannah MacTiernan promised $200,000 over two years to extend an existing research, development and extension (RD+E) arrangement provided through the Bunbury ‘hub’.

Created by a strategic alliance between Western Dairy, Dairy Australia and the South West Catchments Council, the hub took over dairy RD+E responsibility divested from the former State agriculture department in 2015.

But the original funding agreement expired on June 30 and Western Dairy had continued to operate the hub in good faith for almost a month without firm commitment from the State government they would get any further funds.

They each received a gold plaque in the 2018 Dairy Australia Milk Quality Awards.

In the run up to the 2018 IGA Perth Royal Show boutique WA cheesemakers took top honours in the Royal Agricultural Society Dairy and Alternative Dairy Awards.

A premium iced coffee and an innovatively packaged range of flavoured yoghurts in ‘upside down’ squeeze packs were to lead Brownes’ charge east.

Mr Girgis also revealed a lack of surplus milk due to the dry autumn and winter had delayed a reopening of Brownes’ Brunswick cheese factory after three years.

The Creamery features WA’s first robotic rotary dairy capable of handling 540 cows three times a day, a new processing and packaging plant, administration offices and a first-floor glass-walled viewing gallery will allow visitors to watch the complete process from cows coming in to be milked to packaged product being loaded onto delivery trucks.

While one WA dairy business was expanding another was being shed in October.

Lion Dairy and Drinks told its dairy farmer suppliers it was “business as usual” for them after parent company Lion announced its national dairy division was for sale.

In November Lion Dairy and Drinks had more good news for its suppliers, it was going to pay them an extra two cents a litre farmgate price for their milk until the end of the financial year to help them cover rising feed costs and to maintain production.

Federal Department of Agriculture and Water Resources staff held two consultation meetings in Brunswick and Margaret River with WA dairy farmers on a proposed mandatory code of conduct to apply to the commercial relationship between milk processors and their suppliers.

The Brunswick meeting supported standard-format one-year supply contracts offered simultaneously to farmers by the three major milk processors as a minimum starting point but the Margaret River meeting was less enthusiastic about a mandatory code.

The changes allow dairy farmers to terminate contracts if they are disadvantaged by processor-initiated variations to supply terms and provide shorter contract termination times.

They also removed one-sided termination rights, broad indemnities and terms that restrict a farmer’s ability to lease a farm or sell their cattle.

There was also a positive note at Western Dairy’s final forum for the year at Bunbury, with agribusiness operations manager Kirk Reynolds explaining how farmers could still make money over summer from processors’ incentive payments despite the high cost of feed.

The year ended with a new face and two familiar ones promoted on the Western Dairy board after the annual meeting.

Waroona dairy farmer Vicki Fitzpatrick, who was deputy chairperson, was unanimously elected the new chairperson to replace Jindong farmer Grant Evans who stood down after two years in the role but remains on the Western Dairy board.

Mr Jenkins had been seconded to the board previously to strengthen its number of dairy farmers, but his joining the board was endorsed at the annual meeting.

Dairy farmers now face the new year again with a degree of optimism and a hope for a bit more cream on top.