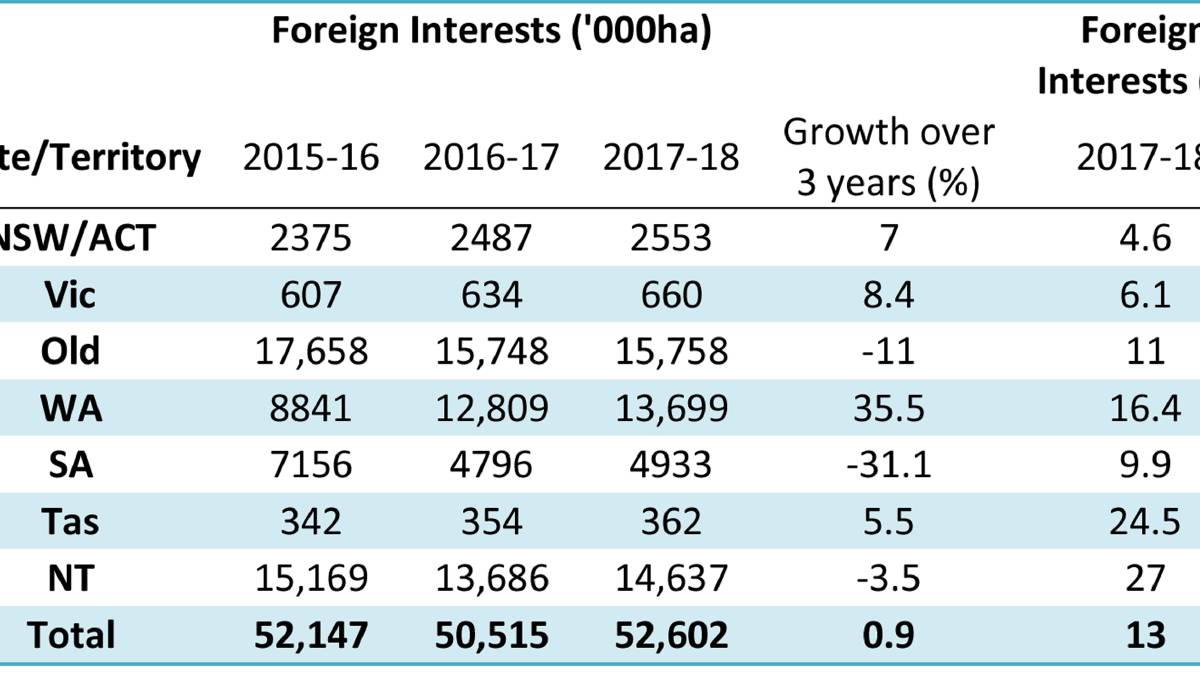 The area of agricultural land with a level of foreign interest.

FOREIGN ownership of Australian farmland has increased by four per cent, according to the Australian Taxation Office.

FOREIGN ownership of Australian farmland has increased by four per cent, according to the Australian Taxation Office.

In its report on foreign investment of Australian agricultural land, as at June 30, 2018, more than two million hectares (mha) have been acquired by overseas buyers.

The level of foreign ownership has remained relatively constant over the past three years with a slight increase.

The report found that WA had the third highest percentage of foreign-held land at 16.4pc, followed by the Northern Territory (26.8pc) and Tasmania (24.5pc).

Putting this into perspective, WA is just above the national average of 13.4pc.

This is much higher than the national average (and other States) with just 0.9pc of agricultural land taken up by overseas interests.

Victoria followed WA is an 8.4pc growth in foreign-held farmland and then New South Wales/The Australian Capital Territory at 7pc.

South Australia and Queensland experienced a divestment of international ownership of 31.1pc and 10.8pc respectively.

The majority of the country’s land that is under foreign ownership is leasehold (81.3pc).

Of foreign-held land in WA, 92.1pc is leasehold.

While livestock makes up a major portion of foreign-held farmland, the use of such land for livestock operations decreased by 1.2pc over the three years, which although is only a small percentage, is significant given the proportion of land that it reflects.

It is a similar situation for other commodities which although only making up a small part of foreign agricultural investments, had large growth over three years.

Foreign-held land use for horticulture rose by 37.9mha, with ‘other farming’ at 26.7pc and cropping at 11.7pc following.

Shining the spotlight on WA, the foreign bodies’ use of the State’s land was similar that of the country with 11.935mha (87.1pc) being farmed for livestock and 558mha (4.1pc) for cropping.

China is second when it comes to having its stakes in Australian farmland, owning 9.169mha and 23.4pc of foreign-held farmland.

Of Australia’s total farmland, the UK owns 2.6pc of land, followed by China with 2.3pc the US with .07pc.

More than 92pc of foreign-owned land is held by Australian incorporated entities.

Some of the sales that contributed to these results include Max’s Vineyard being bought by Chinese investors for $3 million and business man Harold Mitchell, who owns Crown Resorts sold his cattle portfolio to Hui Wing Mau, a dual Chinese-Australian citizen, for about $70m.

ASX-listed Costa Group, involving groups from China and North America, has been on a bid to become Australia’s biggest avocado producer, after purchasing three more farms across NSW and Queensland.

Included is the sale of Merrowie at Hillston and Jemalong Station and Jemalong Citrus, Forbes, NSW,  which were held by the family’s Twynam Agricultural Group.

Mers Global Investments LLC, based in the US, bought Merrowie and Optifarm, a Netherlands-based group purchased the two Jemalong properties.

The rules required properties to be ‘marketed widely’ to Australian buyers for at least 30 days before being on the international market.

The idea behind this was to prevent properties being on the market without Australians realising, but there were criticisms it could impact vendors as they could miss out on getting the best price if they didn’t want to go to market.