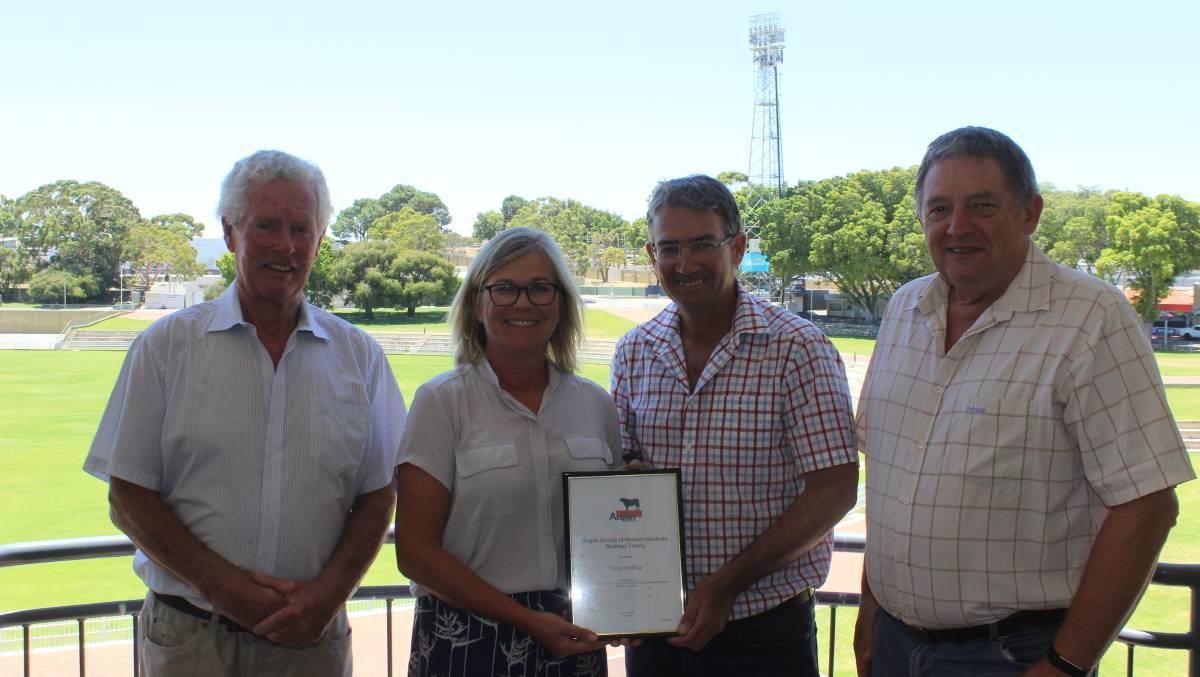 The Strathtay Trophy is presented annually by the WA Angus society chairman.

EACH year the WA Angus Society hands out its most prestigious award, the Strathtay Trophy, to a well-deserving recipient in recognition of their commitment and contribution to the Angus breed.

The trophy was established by the late Jack Young, Strathtay Angus stud, Narrogin and is presented annually by the WA Angus society chairman.

Current chairman Mark Hattingh, Redhat stud, Wannamal, had the task of selecting the winner who had successfully promoted the Angus breed by means of exhibiting, sale or purchase of stud or commercial stock, or by setting an outstandingly high standard in their chosen field, thereby earning the respect of Angus breeders generally.

The 2019 award was handed out last week at the WA Angus Society’s annual general meeting to an honoured and surprised Tony Sudlow, Kapari Angus stud, Northampton.

“I am very honoured to receive this award and certainly accept it on behalf of my family, Liz and the four kids, who are all heavily involved with the stud,” Mr Sudlow said.

“I thoroughly enjoy the Angus part of our family business and it is a big and important part of our business.

“Through our Angus business we’ve met so many great people which is a big part of why we enjoy what we do.

“It is certainly nice for the family to be recognised for the work that goes into it.”

Mark Hattingh, who took over the WA Angus Society chairmanship from Mr Sudlow last year, said Mr Sudlow and his family had given years of loyal service to the Angus breed in WA.

“Especially in recent years when Tony served as chairman of this society,” Mr Hattingh said.

“His dedication to our breed extended long before his tenure as chairman and has continued afterwards.

“He is and has been involved and contributed to the breed in so many ways, from promoting, breeding and giving advice.

“Though it is a difficult decision to single out one award winner, I do feel that Tony has contributed hugely to the breed.

“He lives and breathes Angus and carries the best interests of the breed at his heart which makes him a very deserving recipient of this year’s Strathtay Trophy.”