Trees have been painted blue to highlight a serious message. 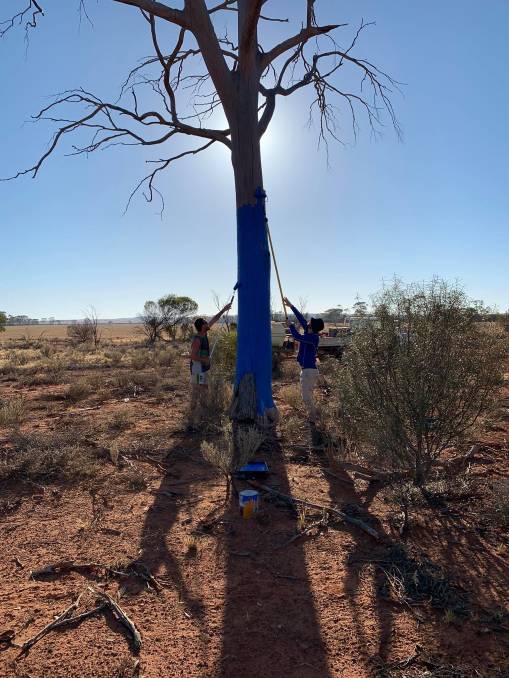 The Blue Tree Project was started with the painting of a tree in honour of the late Jayden Whyte as he had once painted a tree blue on his family's property at Mukinbudin as a joke. Pictured is Jayden's best friend Simon Comerford (right) with his cousin Jared Beagley who painted a 15 metre tall tree at Mukinbudin.

YOU might have seen or heard about dead trees in the countryside being given a ‘blue’ lease on life with a message for a great cause.

In February 2014, Jayden Whyte painted a dead tree blue in the middle of a paddock on his family’s farm at Mukinbudin.

When his father Grant stumbled across the tree it was another humorous moment for their family.

In November last year, Jayden tragically took his own life.

The special story of the blue tree was shared at Jayden’s funeral by Tjarda Tiedeken who joined him in painting the initial blue tree.

Grant had suggested painting a tree blue in memory of Jayden, as well as being a visual reminder for others to check on their loved ones.

In the scorching heat, it took the two men and about two days over two weeks to turn just another old tree into a symbol of hope, love, strength and friendship.

After posting a photo of the tree on Facebook, it soon went viral which prompted the Blue Tree Project to help raise awareness about mental health and suicide prevention.

The initiative has since gained traction across the State, country and even overseas as Simon’s Facebook post was shared more than 23,000 times and liked more than 58,000 times across the globe, as well as circulating on other social media platforms and by word of mouth.

In the Facebook post, Simon wrote: “It is a tribute to my best mate and hopefully the start of something very special”.

The project is being co-ordinated by Simon and his sister Anthea and Jayden’s sisters Kendall and Erryn. 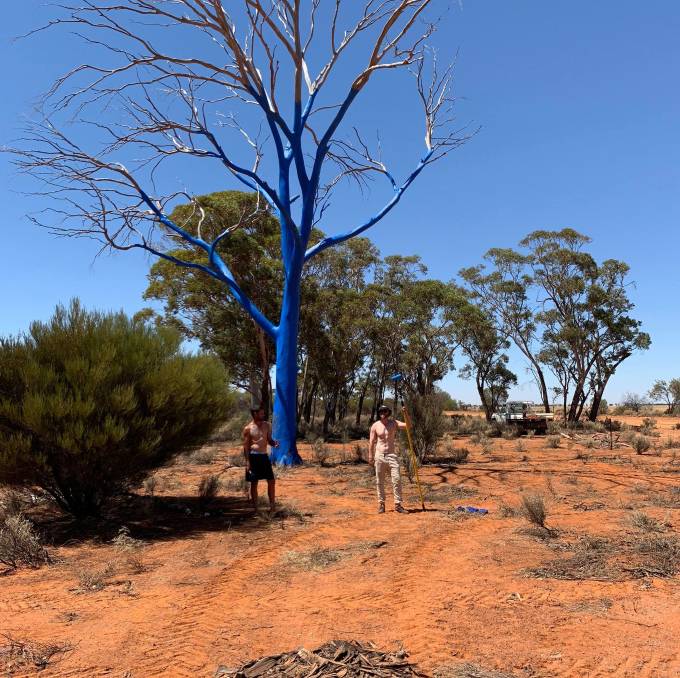 Once the tree was finished, Simon shared the story on social media which went viral, initiating a movement to increase awareness about mental health and suicide prevention.

Anthea said people could get creative in joining the Blue Tree Project to help keep the conversation about mental health active.

“Leading mental health organisations emphasise the importance about talking, with the #YouCanTalk being their recent campaign,” Anthea said.

“The project is about anyone painting a dead tree blue on their private property with environmentally friendly paint or chalk, or wrapping the tree in hessian, woollen knits, or having a blue tree painting or something similar in suburban areas.”

Seeing a blue tree might remind someone that it’s OK to feel ‘blue’ once in a while and to talk to those they are close to about their feelings and mental health.

“Blue trees are a symbol to stand strong like a tree and branch or reach out to someone you trust or a health professional, hotline or other reputable resource for help,” Anthea said.

“Online education, hotlines and Beyond Blue’s safety plan are a few resources which can assist someone experiencing mental difficulty or at a mental crisis point.

“We can all do something in preventing further tragedies by talking and spreading the paint, to help spread the message that you are stronger than you believe, braver than you think and more loved than you know.”

The Blue Tree Project aligns with the #YouCanTalk campaign which has been promoted across various mental health organisations such as Beyond Blue, R U OK? and the Black Dog Institute.

According to the Australian Bureau of Statistics (ABS), in 2017-18 one in five or 20 per cent of Australians experienced a mental health or behavioural condition, an increase from 17.5pc in 2014-15.

Recognising the commonality of mental health issues will help reduce stigma which prevents people from seeking help, be it from friends, family or professionals.

With the correct information and support, many people can live with and manage mental health conditions as others do with physical illness.

Going to a counsellor or therapist when you’re feeling sad or overwhelmed should be as normal as seeing a doctor for the flu.

There should be no more stigma attached to taking mental health medication such as antidepressants than there is for medication to treat physical illnesses like high blood pressure.

According to the ABS more than 3128 Australians died from suicide in 2018, which is more than double the amount of people killed on national roads for 2018.

Suicide accounts for more than eight Australian deaths a day and is the leading cause of death for people aged 15 to 44 years of age.

Research has also shown that more than 70pc of mental health problems that can lead to suicide occur before the age of 25.

With less support services and a common feeling of isolation, people living in regional areas are at more risk to mental health conditions and suicide compared to those in metropolitan areas.

Data from the Australian Institute of Health and Welfare found that from 2010-14, there were 19.6 incidents of suicide per 100,000 people living in remote areas and 22.3 for individuals living in very remote areas, compared to 9.9 living in major cities.

While suicide in regional WA decreased by 24pc from 2016-17, across the period 2013-17, an overall increase of six per cent was recorded.

In a time when people are connected more than ever with technology, the ability to reach out for help or to assist others has never been easier.

Whether you’re living in the country or city and happen to have a dead tree on the property, or an old vase stored in the back of the cupboard, perhaps find a way to put your own spin on the Blue Tree Project.

Even get inventive with the project with wall art or creations in the garden.

It can be to honour the memory of someone you know, or a reminder that everyone has ‘blue’ times and it’s okay not to be okay, help is always there to have brighter days.