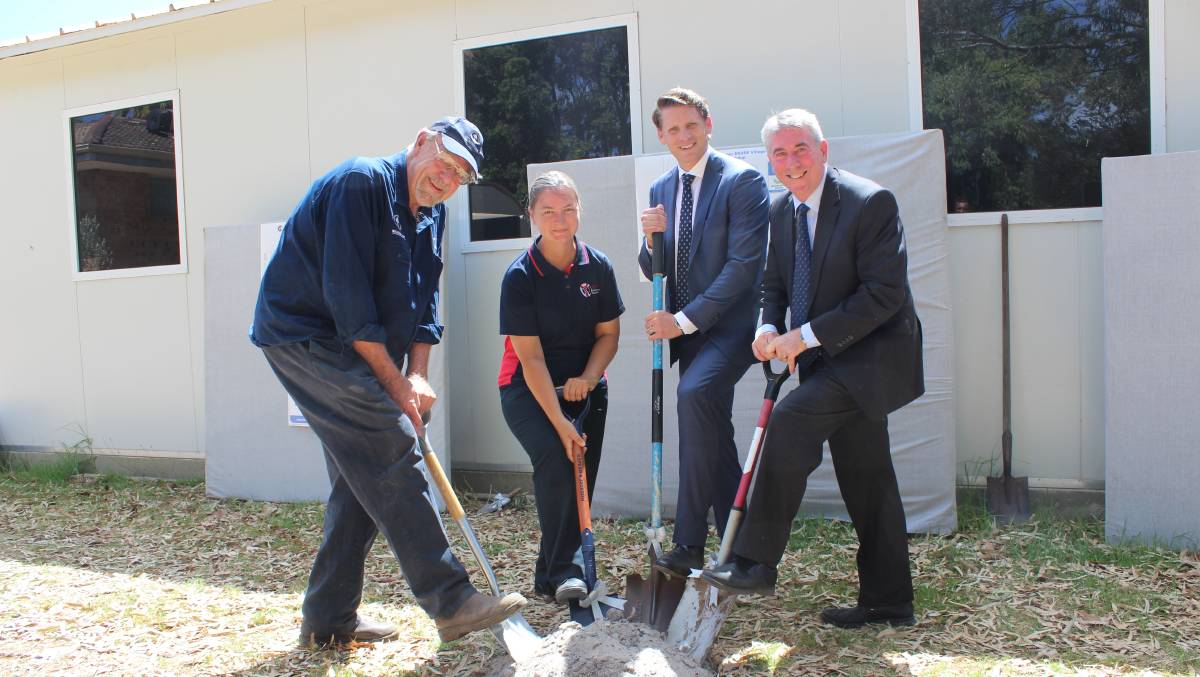 A centre for innovation in agriculture will bookend on the eastern side of the proposed 42,000 hectare Peel Food Zone with the agriculture-services focussed Nambeelup Industrial Area about to be built on the western side.

A BRIEF ceremony last week marked much more than a formal start to construction of a $5 million shared agriculture research laboratory and training facility at North Dandalup.

Canning MLA Andrew Hastie wielded a spade – acknowledgment of a $2.5 million Federal government contribution through its Building Better Regions fund – but the dream embraced by Peel Development Commission (PDC), Murray Shire, Murdoch University and others is potentially far more significant than the facility about to be built.

It will form the first stage of a proposed $26m collaborative multi-disciplinary research cluster called the North Dandalup Centre for Innovation in Agriculture, to be funded by a mix of industry, philanthropic and government support.

Expanded beyond its initial Peel Region focus, it could make North Dandalup the State’s precinct for scientific research to further improve high-value agriculture, particularly genetic improvement of WA’s livestock, eating quality of its meats and production capacity of its pastures, its proponents claim.

The centre for innovation in agriculture will bookend on the eastern side of the proposed 42,000 hectare Peel Food Zone with the agriculture-services focussed Nambeelup Industrial Area about to be built on the western side.

The collaborative approach to both funding and agriculture research was tested and proved by professor Dawkins on a family farm at what is now the Perth outer suburb of Piara Waters.

The North Dandalup centre is a relocation and extension of the vision that became Piara Waters’ laboratory and research cluster.

It was created by the CY O’Connor ERADE Village Foundation – ERADE stands for Education, Research And Development, Employment – established in 1998 as an evolution of an immunogenetics research foundation previously involved in AIDS research.

That facility was used by 20 incubator researchers and entrepreneurial scientists over 15 years before encroaching residential development restricted ability to test research results on adjacent pastures and livestock.

At North Dandalup the facility is unlikely to be built out any time soon.

The research centre and training centre, in separate adjacent buildings, will form part of a proposed 5ha ‘village’ cluster, eventually with a residential component for researchers, established on about 67ha of rural land immediately to the east of the township, with access proposed from the South West Highway and Del Park Road.

Much of the work so far has focused on identifying genetics behind low-melting-point fat in Wagyu meat which makes it potentially healthier to eat than other beef, a cost-effective reliable and simple paddock-to-plate meat marker and deep-rooted Kikuyu grass able to adapt to large water table movements.

CY O’Connor ERADE Village Foundation and TMG will match the Federal funding to build the research and training centres which will provide businesses, researchers and entrepreneurs with access to laboratory facilities, food processing facilities, meeting rooms, workstations and livestock and pastures.

He said CY O’Connor ERADE Village Foundation has “letters of intent” from two incubator companies which could become the facility’s first tenants.

“It is essential to support advanced research activities and early-stage start-ups focussed on solving problems in the $7.8 trillion global agri-food industry.

“We are making it happen by collaborating with industry, all levels of government, Murdoch University and international organisations.

“There is a real need for R&D (research and development) – unmet so far – and there is a real need in the training of the next generation of people who wish to farm, so hence the idea of this research facility in North Dandalup close to those farms,” he said.

Until the recent renewed interest in the Peel region as a food-production area, it was “at risk” of being “sold off to Asian investors” for other forms of development, professor Dawkins said.

“I call on others to join this initiative and to support what we need, which is funding for scholarships, training, research and development here in the Peel region.”

“We have plenty of organisations which might want to follow this lead and plenty of ultra-high net worth people in this region who might be persuaded also.

“It’s a proven model for linking researchers with industry to focus on research and development towards use and commercialisation, and we hope to be able to announce a positive outcome of further funding from this avenue in the near future.”

“It’s not often people (like professor Dawkins) put their money where their mouth is,” Mr Bolt said.

“It does make a difference because it is the catalyst for other people to come and join us and we believe this facility will bring scientists, researchers and entrepreneurs to our region, will stimulate employment opportunities and support the Shire’s initiatives for education, particularly in science and technology, engineering and maths.

“It encourages the changes agriculture needs to be competitive into the future,” he said.

The Peel Food Zone is proposed as part of the PDC’s $49m Transform Peel initiative aimed at boosting economic activity to $16 billion a year and creating 33,000 jobs by 2050.

The Department of Primary Industries and Regional Development is creating a ‘map’ of the proposed food zone linking soil types to most suited land uses and the Department of Water and Environment Regulation is looking at potential water supplies for the region and measures to prevent herbicides, pesticides and more intense development impacting on water quality in the Peel-Harvey estuary.

LandCorp is developing the initial stage of a proposed 1000ha industrial area on the western boundary of the food zone.

It is envisaged the industrial area will attract a range of businesses with links to agriculture, including equipment and chemicals suppliers, food processors and packaging and transport companies.

Professor Dawkins and other members of the CY O’Connor ERADE Village Foundation see their North Dandalup Centre for Innovation in Agriculture complementing the long-term food zone proposal, as well as having wider benefits for WA agriculture generally.