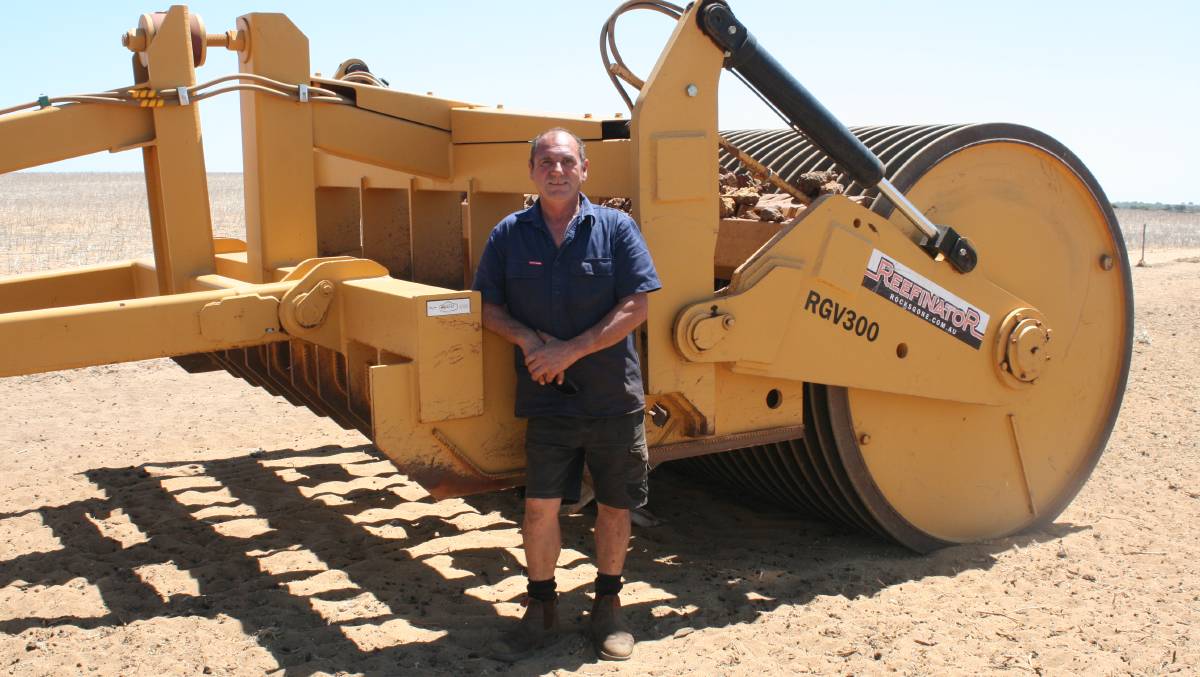 Carl Moltoni has spent the past few weeks towing his Rocks Gone Reefinator across his Yathroo property.

Having already completed the spreading of super on his pastures, the second-generation farmer is looking to tick the next thing off his list.

PREPARING for the 2019 season has meant crushing rocks with a Reefinator for Yathroo farmer Carl Moltoni.

Having already completed the spreading of super on his pastures, the second-generation farmer is looking to tick the next thing off his list.

"Getting into some reefinating is our next big job," Mr Moltoni said.

"We purchased a reefinating machine last year after we dry hired one for a year."

Spading the soil has also been a focus for Mr Moltoni.

"I have done quite a bit of liming over the past five years and incorporated it with my spading," he said.

"I will do a bit of liming this year but since the whole farm has been done over the past five years I will just do the odd patches and deep rip them as well."

Mr Moltoni said he has seen amazing results from his spading program with an increased yield of 600 kilograms per hectare.

"The non-wetting dirt was killing us and we weren't getting the plant numbers," he said.

"But now I have paddock that I think will last up to 15 years before it needs to be done again.

"I have a paddock that I spaded eight years ago and that hasn't shown any signs of non-wetting yet."

Mr Moltoni has since sold his spader with the proceeds going into purchasing the Reefinator.

Unarable land that had surface rocks is not an issue anymore.

"Some ridges you have to go over eight or nine times to get them crushed," he said.

"It can be very time consuming.

"I tend to take as minimal rock as possible each time otherwise it's too hard on the tractor."

Mr Moltoni said he had a lot of rock heaps that were piled up over the years and now they are spreading them out and crushing them into the soil.

Another key part of the 4046 hectare property is Mr Moltoni's sheep production.

Currently he has 2800 mated ewes, 400 ewe lambs that aren't mated and wethers.

He doesn't usually carry many wethers but because of the uncertainty of the live export industry last year, he was left with 700 wethers.

A month ago Mr Moltoni offloaded 400 to live export and was hopeful the other 300 would also follow suit.

"We have Merinos and we mate to Border Leicester," he said.

"After my first cross I put Poll Dorsets over them, so I have a mix of wool."

Mr Moltoni finished his shearing in February and said "they cut really well this year".

"Coming off a good season last year, we have gone from one extreme to the other," he said.

Mr Moltoni said the sheep were the best he had seen them in a long time.

"They came off two very hard years of feeding and I have never spent so much on feeding sheep," he said.

"But this year everything is working out great.

"I have a bit of seconds grain that I got from screening our grain, so that should be all I need to feed them."

This year he is hopeful he won't spend money on pellets due to the amount of feed he has on the property.

"It's amazing how it changes so quick - one good winter in between," he said.

"It will be nice to have another good winter this year too to make it two in a row."

Mr Moltoni said he hadn't yet looked at the weather forecast for the year and he probably wouldn't until just before seeding, with most of his program being dry seeded last year.

"Hopefully we get a bit of rain this year early so we can get a good knockdown on our weeds," he said.

"Last year the weeds beat us because nothing established before the crop and we were relying on selectives."

Even though there were a few weed issues and they got a touch of frost, Mr Moltoni said last year as a whole was an above-average season.

This year he also has 600ha of Serradella for his sheep which he said had become an important part of the sheep's health.

Across his wheat, canola and lupins Mr Moltoni had a solid season and this year he will be seeding some barley to beat the frost.

"I'm putting barley in on the lower country because the frost got me last year," he said.

"I was seeding barley in the past but I find it quite volatile.

"One year you make money and the next year you get nothing for it."

Mr Moltoni now crops 45 per cent of the property which hasn't always been the case.

Over the past 20 years he has changed from a majority sheep to an almost 50:50 split.

"We used to be pretty well all livestock and we only put in 160ha of crop," he said.

"But over the years with the way sheep were and the wool and meat markets, I couldn't be just sheep.

"Now with the prices back up for sheep and grain I think the two of them work well together."