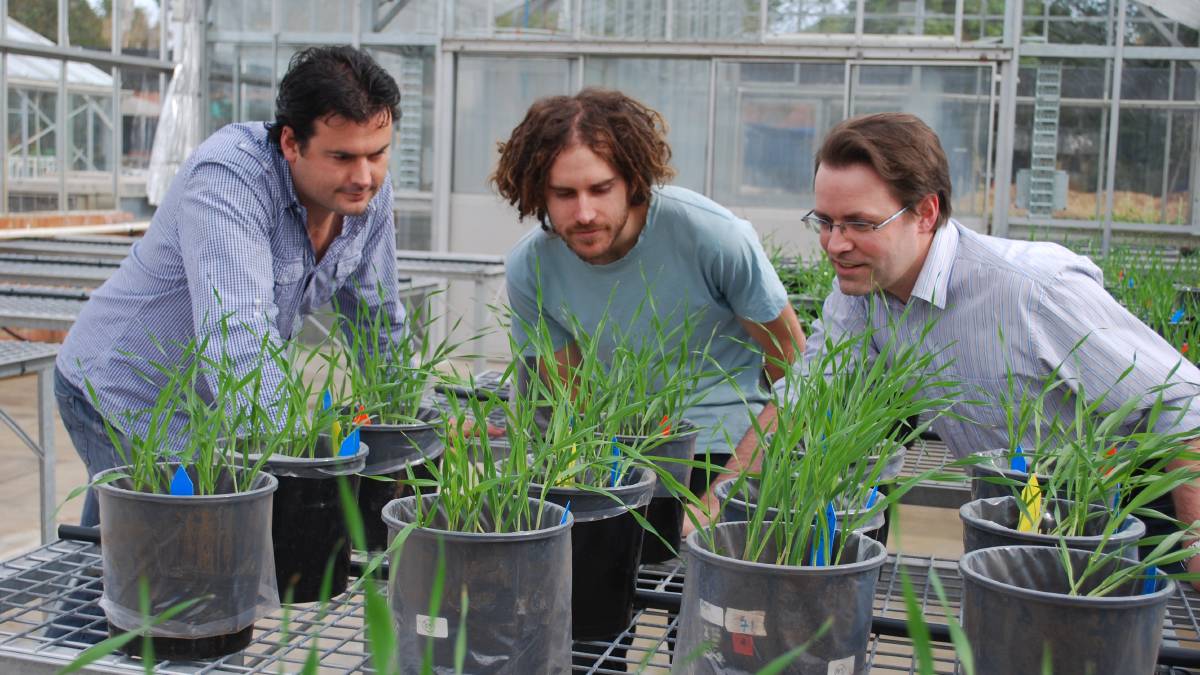 Nicolas Taylor (left), Richard Jacoby and Harvey Millar from The University of WA Centre of Excellence in Plant Energy Biology have uncovered a potential game changer for how wheat performs in salt-affected soils.

A discovery by scientists at The University of WA could be a game changer in terms of how wheat crops perform in salt-affected soils.

A RECENT discovery by scientists at The University of WA could be a game changer in terms of how wheat crops perform in salt-affected soils.

Published in the journal New Phytologist, the research from the UWA School of Molecular Sciences, the ARC Centre of Excellence in Plant Energy Biology (PEB) and The National University of Malaysia uncovered two enzymes in wheat that are especially sensitive to salt and that appear to be the weak link that leads to plant death in saline soils.

Lead author of the study Nicolas Taylor, UWA PEB, said they took wheat plants from the field and also tested salt-treated plants in the lab to analyse metabolic networks within those plants and studied the chemical reactions and which ones were changing under salt and which weren't.

"From that process, we were able to narrow it down to a couple of key enzymes that seemed to be really affected by salt much more than similar enzymes in other parts of the metabolism of the plant," Dr Taylor said.

"We then tested those enzymes and found they were really sensitive, but at the same time the wheat was using a natural defence system that can bypass one of the sensitive enzymes, partially protecting it against salt."

The bypass system identified by the researchers, called the GABA shunt, allowed wheat plants to stop using one of their salt-sensitive enzymes when threatened by saline soil.

However, the resistance provided by the GABA shunt also appears to have a limit and is overpowered by especially saline soils.

"If you imagine a whole range of chemical reactions going on in the plant, converting one thing to another, these particular things weren't able to be converted and so the plant had to do a bypass," Dr Taylor said.

"Why this might have good implications is we can look at other plants and their enzymes and see if they are equally insusceptible to salt.

Dr Taylor said it had taken five years to get the research to this point.

"In that time we have been building a database of proteins that exist in wheat," he said.

"We had to do that first so that we can then use that database to interrogate the stress response to salt.

"We are also doing it for heat and cold and some other things as well.

"Once we had built that database, we had a PhD student who over a period of 18 months was able to investigate that salt response and narrow it down to these couple of enzymes and then prove it and then we wrote and published this paper.

"If we can learn how to control the GABA shunt, its timing and intensity, we may be able to boost the wheat plant's natural resistance to salt, without an impact on yield.

"By understanding exactly how salt is damaging wheat plants, we can look for varieties with improved natural salt tolerance and introduce them into breeding programs."

Dr Taylor said they were investigating barley to see if there was a similar effect and were excited about the potential of extending the research to take in other limiting factors within the WA grain industry.

"We are thinking now that we can apply it to other sorts of questions about challenges that are faced by WA farmers," he said.

"For example, we can nail down the enzymes that are really susceptible to frost and also end of season heat stress.

"We have proven our theory and we want to apply it to as many things as we can."