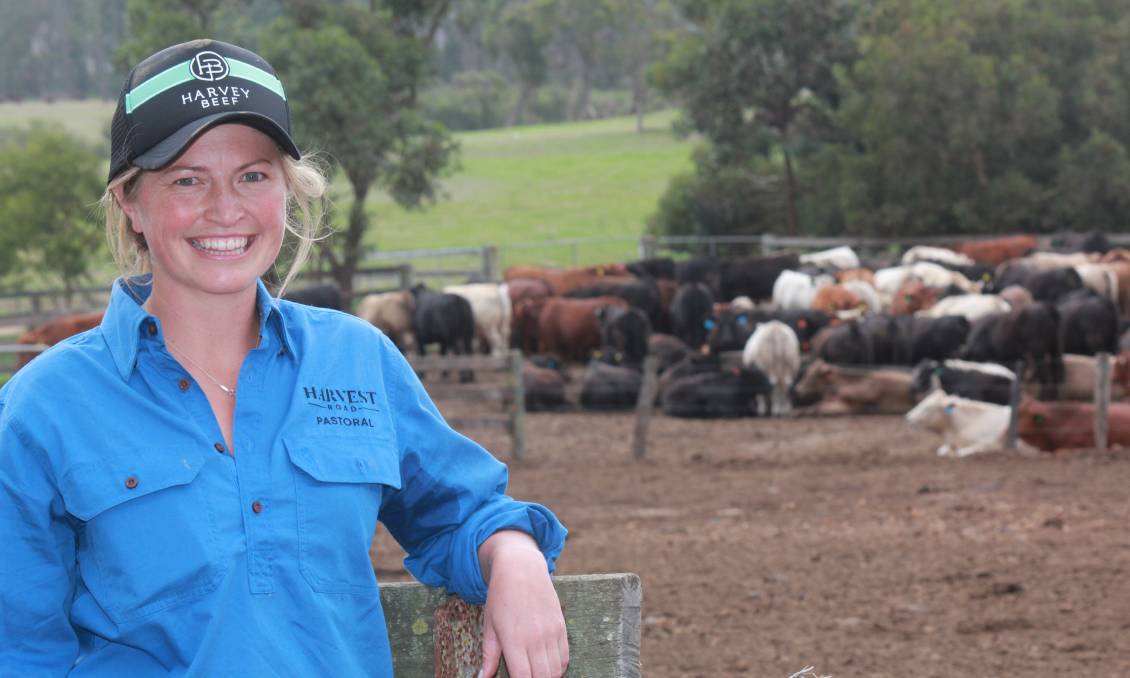 Katrina Weir has followed her childhood dream of working on stations and is currently helping to manage Minderoo station in the Pilbara.

Growing up on a Merino farm in Yass, New South Wales, Katrina always harboured the goal of working as a jillaroo on a station in the Northern Territory.

EVEN though she went about it in a roundabout way, Katrina Weir is now living her dream.

Growing up on a Merino farm in Yass, New South Wales, Katrina always harboured the goal of working as a jillaroo on a station in the Northern Territory.

That aim eventually led her to Minderoo station in the Pilbara, but it is the journey she embarked on and the skills and life lessons she accumulated on that journey that is the real story.

Katrina provided an inspirational address to more than 100 ag college students at last month's Harvey Beef Gate 2 Plate Challenge, in Albany, where the theme of the day was providing guidance and tips to land a dream agriculture job.

Katrina isn't entirely sure where her passion for the station country came from, as she said growing up on a Merino farm in Yass she had never worked with cattle or had anything to do with horses.

"It was a pretty far-fetched dream at the time," she said.

Katrina went away to boarding school and was lucky enough to be able to study agriculture as part of her studies from years 9 to 12.

"I got through year 12 and still had that aim of working on a station, but when the recruiting ads came out I panicked and rather than apply for a job as a jillaroo, I applied for a job as a governess," she said.

"So just after my 18th birthday the following year I packed up my bag and my swag and headed up to the Northern Territory to work as a 'govie'.

"I arrived at a station in the Kimberley and had a lovely bunch of kids who ran rings around me,

"There were certainly aspects to that job that completely challenged my confidence and my abilities, but there were also some wonderful opportunities as well.

"Occasionally on weekends and before work started in the mornings I would go down to the yards and give the ringers a hand and just like my original hunch I realised that I absolutely loved the work.

"Thankfully my boss helped me find a job at a nearby station."

It was here that Katrina said the fun and hard work really began.

"Normally we would be up at 5am and saddling horses by 5.30am and it wasn't unusual to still be in the yards at 8pm," she said.

"We would go out on camp for two weeks at a time and sleep under the stars in swags and do our washing in cement mixers and eat some tough beef, but I absolutely loved every single minute of the experience.

"Looking back on it now, I had zero experience to speak of.

"In agriculture, your attitude is imperative if you want to have a crack at this industry."

After her gap year in the Northern Territory, Katrina decided it was time to do some extra study, so she headed to the University of New England in NSW to study a double degree in agriculture and business.

"During uni I made the most of the fun lifestyle, but eventually I realised I should probably get some jobs on the side to gain some experience in what I was learning about," she said.

"So during the summer holidays I would drive tractors and check cotton and chip burrs in northern NSW.

"It was a fantastic experience.

"During my third and fourth year I was fortunate enough to get a position with a company called Practical Systems, which specialised in finance, farming and livestock software for primary producers.

"I had no skills in software, but I did have that good attitude and the little bit of knowledge I had learnt at university

"Because of this, I went okay and in the second year I was selected by the company to go to New Zealand to the Mystery Creek field days, one of the biggest field days in the southern hemisphere, which was a great experience.

"Further study once you leave school is a positive, it helped me meet other people and build networks and it was certainly a beneficial part of my life."

"It was long hours but there were so many opportunities to have fun and to see so much of Australia," Katrina said.

Little did Katrina know at the time but these random jobs she was picking up while at university, would eventually help her job prospects later in life.

On finishing the Kalyx job, Katrina decided to push her personal boundaries again and took another gap year, this time travelling to the United States to teach water skiing.

"I was teaching people aged three to 73 and it was an unreal opportunity," she said.

"I met some great new friends and got to travel from Calgary to New York to North and South Carolina and all places in between.

"It seems pretty left field from the rest of my life, but I think in any job there are bits you can pull out of them to help you later on and there were certainly some skills I learnt in the US that were transferable to other jobs in the future, mainly that it helped me gain independence."

When she got back from the States, Katrina decided it was time to get started on a career that was long term and not seasonal.

"So I started looking around and after three months of perseverance and gaining a lot more resilience, I was offered a graduate role with a group called Integrated Traceability Solutions," she said.

"This company had a few different arms, it owned and managed several saleyards in eastern Australia, it also had software that serviced a large proportion of the saleyards and livestock companies.

"I began working for them and all those seemingly random jobs that I had previously came into play.

"I could work in saleyards moving cattle and sheep, or I could talk about wheat prices with farmers and I had a foundation in software, so it all came together and was actually setting my career direction."

Katrina was based in Wodonga, Victoria, for six months and then moved to Brisbane, Queensland, where she took on the role of client and communications co-ordinator for Integrated Traceability Solutions.

"While I loved Brisbane and loved the travelling that went with that job, after nine months I realised I was starting to miss the rural lifestyle," she said.

"By chance at the same time I was approached by a friend from university who told me about a job going at Minderoo station."

Minderoo sits on the banks of the Ashburton River, close to Onslow and is owned by Andrew and Nicola Forrest, under their Harvest Road Group banner.

Minderoo has invested significantly in improving its herd genetics.

The station's base breeder herd of Droughtmaster cows is now infused with Red Angus and Senepol genetics to enhance maximum hybrid vigour, while maintaining an even red line.

"I had never heard of Minderoo or the Pilbara, but after a lot of deliberation with family and listing out the pros and cons of it I decided to take the job," Katrina said.

"So once again I packed up my bag and swag and travelled 3000km to the other side of the country.

"There I was as a 25-year-old wondering what the bloody hell I had done moving to the Pilbara.

"But I couldn't help but immerse myself in this new place and I really hit my strides.

"I drew on every bit of all the experience I had gained up until that point to make this place a success for me."

And make a success she has, Katrina and her partner Hamish Lee-Warner now manage Minderoo station and work in with other managers of the Harvest Road Group's station network.

As Katrina said, the Harvest Road Group was a prime example of the opportunities and options that exist in Australia's agricultural industry.

"The company encompasses Harvey Beef, it is building a new feeding and backgrounding facility and has an aquaculture arm, so there are many varying parts that you can participate in that is not just kicking the dust up somewhere out in the desert," she said.

"It shows that agriculture has many options available to you.

"Through agriculture I have been able to work in every State of Australia, except Tasmania and I have been challenged every day.

"No two days are the same and that is what I love about it."