Reduced agriculture and labour productivity could cost Australia more than $19 billion in the next 11 years unless climate change is adequately addressed, according to the Climate Council of Australia. 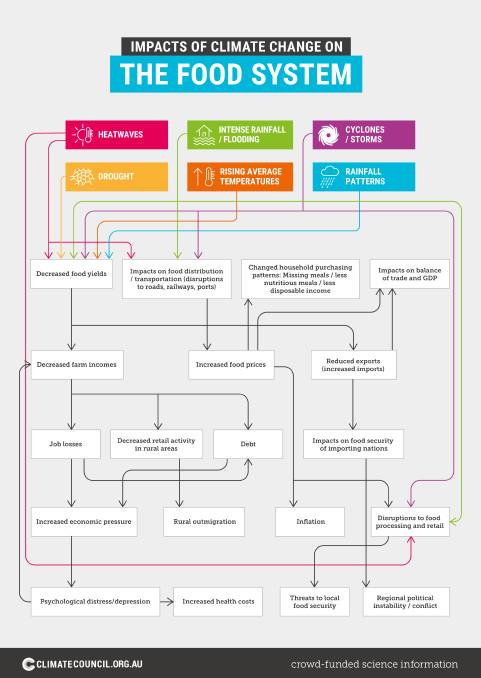 The impact of unmitigated climate change on food production in Australia, based on new modelling for the Climate Council of Australia.

REDUCED agriculture and labour productivity could cost Australia more than $19 billion in the next 11 years unless climate change is adequately addressed, according to the Climate Council of Australia.

New computer modelling for the Climate Council has shown that without climate change mitigation, by 2050 half of the irrigated agriculture output of the Murray-Darling Basin will be lost.

That output is currently worth about $7b a year and accounts for about half of Australia's irrigated agricultural production, according to Australian Bureau of Statistics data.

By 2090, yields on WA's 4200 farms that currently produce half the national wheat crop, are projected to fall by 41-49 per cent unless greenhouse gas emissions are reduced, the modelling projected.

Shifts in rainfall patterns will have the strongest influence on WA wheat production, the council said of the results of modelling which was based on current government climate targets.

If global greenhouse gas emissions follow a trajectory set for Australia, the loss of wealth through reduced agriculture and labour productivity will reach $211b by 2050 within Australia, the council warned.

After 2050, the cumulative economic cost to Australian agriculture and labour of failing to limit greenhouse gas emissions will ramp up quickly, it warned this month in a report titled Compound Costs: How Climate Change is Damaging Australia's Economy.

By 2100 it will reach $4.2 trillion, equivalent to about $61,000 per person on average, based on a projected population of more than 60 million people by then, it found.

The report stated the modelling was restricted to assessing damages arising from reduced agricultural and labour productivity, loss of arable land due to sea level rise and some health impacts.

Loss estimates due to projected more severe and more frequent extreme weather events, such as floods, bushfires, tropical cyclones and droughts, were not included in these figures, it stated.

Neighbouring countries, many of which are major trading partners with Australia, are projected to experience much more severe damages than Australia, the report claimed.

"Direct macroeconomic shocks from climate change, including reduced agricultural yields, damage to property and infrastructure and commodity price hikes, are likely to lead to painful market corrections and could trigger serious financial instability in Australia and the region," they warned.

The authors pointed out financial regulators such as the Reserve Bank of Australia, the Australian Prudential Regulation Authority and the Australian Securities and Investment Commission had also warned of the risks of climate change to the economy and financial stability.

Agriculture and labour productivity, as well as the property sector, were vulnerable areas of Australia's economy at risk of suffering "very significant" financial damage and reduced resilience due to the cumulative impact of climate change, the report found.

It pointed out there was already amply statistical evidence from a variety of sources to demonstrate extreme weather events, most particularly drought, had a significant and widespread impact on agriculture production and incomes, processing and service industries and on regional employment.

Droughts in the 1980s, 1990s and 2000s each shaved about 1pc off national Gross Domestic Product (GDP) growth in the years they occurred, the report stated.

While agriculture's contribution to GDP recovered once the drought broke, the report pointed out science suggested a changing climate was transitioning away from relatively predicable "cyclical" extreme weather events that historically occurred on a "stable average".

Now, according to the report, climate change is driving a trend change, increasing both the frequency and severity of extreme weather events and "shrinking the recovery times" between events.

This increased probability of simultaneous and possibly contrasting extreme weather events occurring in different parts of the country, it said.

Apart from direct impact on particular growing seasons, climate change like this can also erode productive capacity through diverting funds towards recovery and away from investment in new technology, machinery or research, leading to long-term reductions in productivity growth, the report pointed out.

Estimates of future drought frequency and impacts suggested an effective lowering of GDP by 1pc every year unless climate change is addressed, it claimed.

The report was written by professor Will Steffen, climate councillor, Dr Karl Mallon, director of science and systems at XDI Pty Ltd which conducted property sector modelling for the report and professor Tom Kompas, environmental economist, School of Biosciences and the School of Ecosystem and Forest Sciences, University of Melbourne.

Dr Annika Dean from the Climate Change Research Centre at the University of New South Wales, as senior researcher and Dr Martin Rice, acting chief executive officer of the Climate Council, as head of research, also contributed to it.

They found severe costs of climate change outlined in the report "are not inevitable", but to avoid them greenhouse gas emissions must decline to net zero emissions before 2050.

"A credible national climate policy is needed to safeguard our economy by reducing the direct costs of climate change and avoiding economic risks associated with a sudden, disruptive or disorderly transition to net zero emissions," they found.

The report is available online at climatecouncil.org.au

"Australia's agricultural sector has an ambitious target to be a $100 billion industry by 2030," Ms Morgan-Schmidt said.

"This report needs to be a wake up call for all sides of politics.

"It's time for us to rise to the challenge and support farmers to implement climate solutions while delivering a smooth transition to clean energy," she said.

Former WAFarmers president and Badgingarra cattle producer Dale Park said every WA farmer was adapting to the effects of climate change "whether they want to admit the circumstances or not".

"This year is a classic example, everyone is holding off seeding, changing their mix of grains because there has been no rainfall and therefore, no soil moisture," Mr Park said.

"We must collectively act on climate change and Australia has to provide international leadership.

"We have to get to zero emissions by 2050 if we want to avoid the worst of climate change and the only way we can do that is by putting in the effort now.

"Industry and government can't stick their heads in the sand on this one, the risk of doing nothing is too high," Mr Gardiner said.

"Agriculture is on the front line of climate impacts, but we also need to proactively rise to the challenge of tackling our own emissions profile.

"Direct emissions from the sector comprise roughly 16pc of Australia's total - mostly from fertiliser use, diesel and cattle and sheep burping methane gas into the atmosphere.

"Agriculture needs to get ahead of the game and lead the way, drawing extensively on innovative solutions to reduce emissions and boost productivity.

"These things take time and significant funding - government and industry must start planning for this now."

Goomalling wheat farmer Christie Kingston said the "time for fear-mongering and delays" on dealing with climate change is over.

"Australian farmers are some of the best in the world at managing climate variability, but we can't do this alone," Ms Kingston said.

"We need strong policy, including a national strategy on climate change and agriculture to help us manage these risks.

"Collectively, we must rise to the challenges of a changing climate and identify solutions to safeguard and strengthen our agricultural sector, now and into the future."

"When will the activists be honest and say even if Australia goes completely green and cuts 100pc of our emissions, it accounts for just 1.3pc of global emissions and it would not make the slightest bit of difference to how much it rains in Merredin or Mullewa in 20 years time?" Mr Whittington asked

"Australian agriculture is in fact reducing its emissions when it is making serious profits and able to up-scaling fast to more modern and efficient machinery.

"Can we get away from the emotion and talk about what really will make a difference, such as tax deductions for new machinery and genetic improvements to ruminants - in other words less press releases and politics and more agricultural science and farm economics."