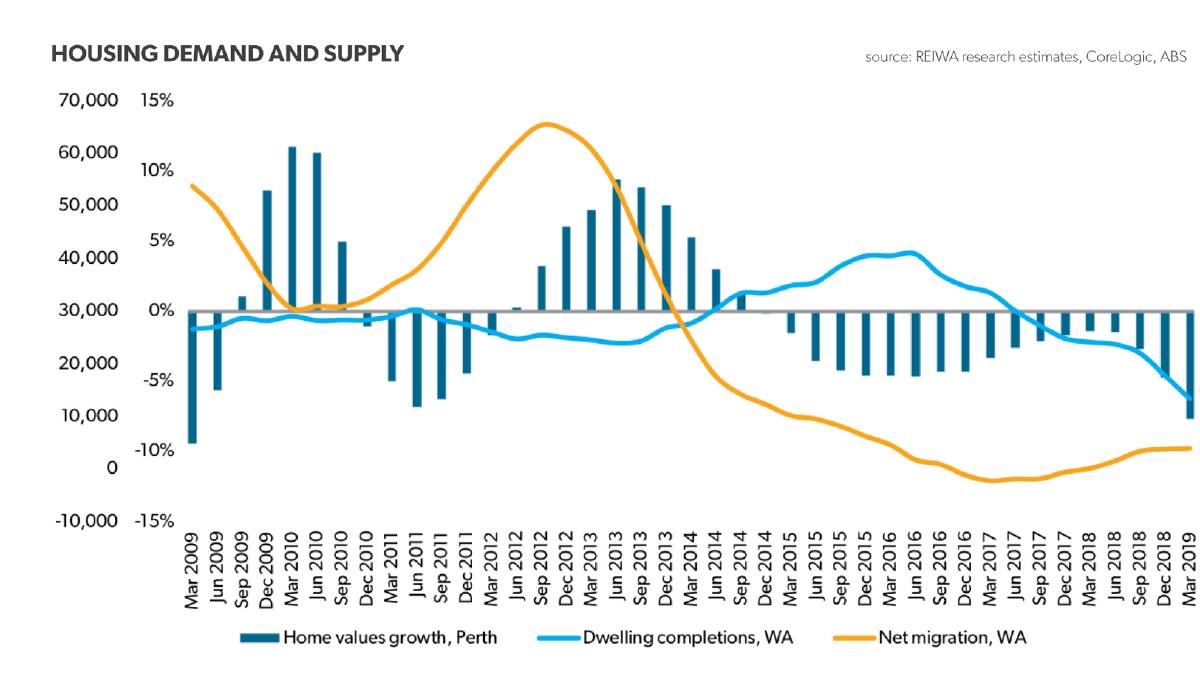 Despite the Perth property market showing positive signs, expect there to be quite some time until house prices rise significantly.

ALTHOUGH the Perth property market is said to be on the mend from the downturn which began in 2014, recent market activity has suggested it will be a long, slow recovery.

The Real Estate Institute of WA's (REIWA) latest quarterly report on the first quarter (Q1) 2019 found that the market took a small step back.

REIWA has attributed the slump in Perth's property market to less population growth - 0.9 per cent annually, compared to 3pc observed earlier in the decade - matched with a delayed response to supply the rapid increase in population during the mining boom.

In an environment with excessive supply with low demand for property, the chance for prices to increase has been extinguished.

Tighter access to housing finance has curbed interest from both owner-occupiers and investors.

During the March quarter, sales activity decreased by 10pc with 6724 transactions recorded by members, which is largely attributed to a drop in unit sales (6pc) and vacant land sales (31pc).

However, median house prices have seen positivity over Q1, with values expected to settle at $500,000, up 0.6pc on the December quarter.

On an annual basis, Perth house median price has remained stable and unit median prices are forecast to settle at $380,000, down 0.5pc from the previous quarter and a 5.5pc fall annually.

Throughout Q1 properties were on the market for an average of 78 days, which is 10 days slower than the December quarter.

This suggests that confidence among vendors is increasing but is yet to be matched by buyer demand.

Mandurah was the only region to record increases in both sales activity and median house prices.

Median house prices in the South East region remained stable at $450,000 and the number of sales fell 9pc to 1555.

The remaining regions all recorded declines in both sales and median house prices.

Losses in the Perth South West region were minimal as sales fell by 6pc to 1471 and median house values dropped by 4pc to $490,000.

The Inner region took the biggest blow with sales dropping 22pc to 660 and house prices were down by 7.3pc at $1.1 million.

REIWA president Damien Collins said that the recent Liberal National Party (LNP) election victory was a win for the Australian property market and would aid in WA's recovery.

"We are delighted there will be no changes to national property taxes," Mr Collins said.

"Meddling with one component of a broader tax system is reckless and would have had significant consequences for the Australian housing market.

"This outcome will provide much needed stability for the WA property market.

"We are looking forward to working with our local federal members of parliament and senators on ensuring good housing and investment outcomes for all Western Australians."

In the lead up to the election, REIWA's What about WA? campaign called on Federal political parties to not forget about the State when making policy commitments.

"For too long we've seen WA overly relied upon when times are good and ignored when we are doing it tough," Mr Collins said.

"It's time we got our fair share of federal funding and support.

"In particular, we'd like to see the Morrison government introduce Federal incentives to help States and Territories phase out stamp duty.

"In addition, REIWA would like to see Perth put back on the Regional Migration Scheme to help attract skilled workers to WA and fill the current oversupply of housing and we want a minimum 15pc infrastructure budget implemented, based on WA's substantial contribution to Australia's GDP."