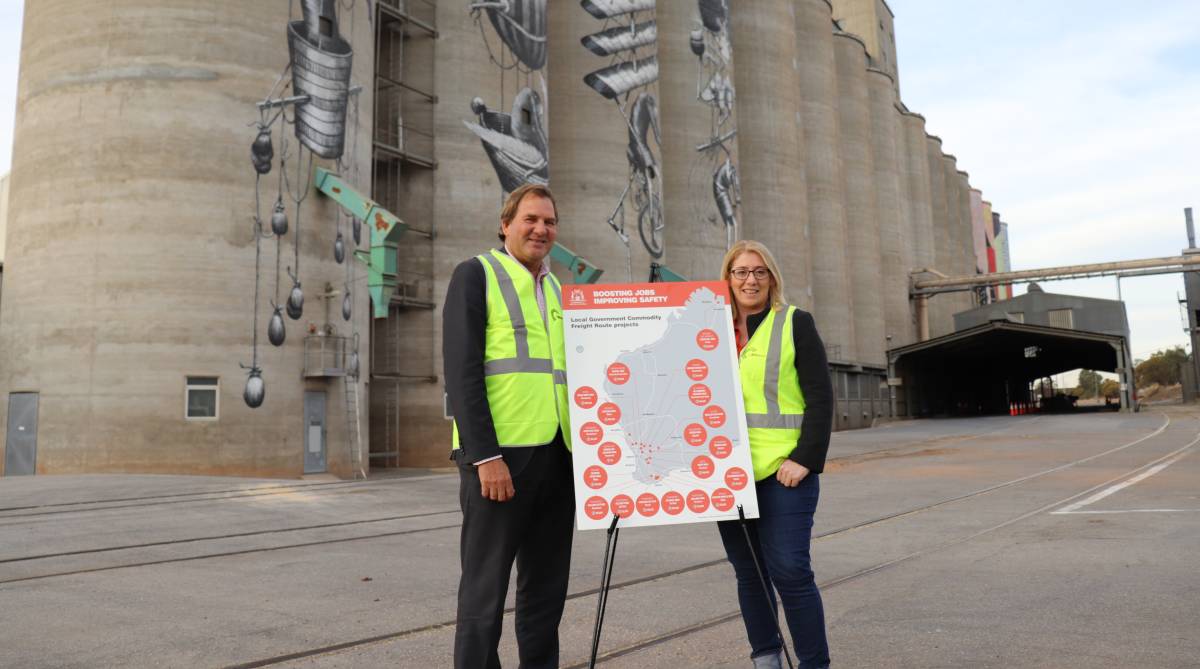 A DRAFT strategy to address challenges for more efficient transport of agricultural commodities and inputs across the Mid West, Wheatbelt, Great Southern and Goldfields-Esperance regions has been released for comment.

A DRAFT strategy to address challenges for more efficient transport of agricultural commodities and inputs across the Mid West, Wheatbelt, Great Southern and Goldfields-Esperance regions has been released for comment.

Outlining a co-ordinated approach to road, rail, intermodal terminals and port access projects over the next 10-15 years, the draft Revitalising Agricultural Region Freight Strategy - Responding to Change document is available on the Department of Transport website.

Comment on it is sought by July 12 and the State government hopes to have the completed strategy released before the end of the year.

She said the projects would be carried out over the current and next financial years by local councils but under the financial control of Main Roads.

Ms Saffiotti said the $10m funding was allocated in this year's State budget as part of the government's commodity freight routes package but the works could not all be completed this year.

She said Main Roads called for project applications via the current Regional Road Group structure last July and a technical review group assessed proposals and ranked them according to agriculture freight movement and road safety improvement.

Ms Saffioti said most of the 20 freight route projects had been raised in extensive consultation with the agriculture industry, transport operators, local government and government agencies in developing the draft agricultural region freight strategy.

The draft strategy acknowledges WA's agriculture and food sector represents about 10 per cent of the State's economy and is a significant source of employment, providing more than 30,000 jobs.

The freight task is immense, with millions of tonnes of product moved on the road and rail network every year, but while farm size, agricultural machinery, heavy vehicle combinations and train lengths have expanded rapidly, supply chain infrastructure has not kept pace, it acknowledges.

This includes road and rail networks, intermodal interfaces between networks and containerisation terminals, as well as regulatory systems and processes.

The State's agricultural export value was $7.7 billion in 2015-16, which included key export commodities of wheat, barley, canola, wool and livestock, with grains in particular facing increased competition on global markets from low-cost producers with low-cost supply chains, the draft strategy points out.

It claims to identify where the most effective infrastructure investments and regulatory improvements can be made to achieve the objectives of having connected and continuous supply chains, seamless integration between road and rail, an optimised infrastructure and policy environment, improved transport efficiency, improved road safety and regional economic growth.

Ten key challenges are identified in the draft strategy.

The draft strategy lists the proposed projects as:

Improvements to rail lines north-east of Northam, Northam-Southern Cross and Miling-Toodyay are also proposed, as well as targeted road network investment for increased heavy vehicle access throughout the Wheatbelt and to Perth.

Various non-region specific and other initiatives have been identified to improve the transport supply chain, including investigating toll roads and other road funding mechanisms, including WA rail lines in the National Land Transport Network, forward planning for ageing and high priority bridge structures and a review of level crossing agreements for disused Tier 3 rail corridors to resolve stacking distance issues for heavy vehicles.

Ms Saffioti said once the strategy was finalised and approved it would form a framework to enable funding commitments to be sought from various sources, including users, leasers and the various levels of government.

"What we've really wanted to do as a government is to develop comprehensive strategies that can help target our spending and also enable us to go to the commonwealth and seek contributions," Ms Saffioti said.

"With the agricultural and food sector representing about 10pc of WA's economy, we need to ensure our crucial transport supply chains continue to improve, helping our key regional agricultural areas prepare for future growth.

"The draft Revitalising Agricultural Region Freight Strategy identifies high priority infrastructure investments and regulatory improvements to help enhance efficiency, safety and economic growth of our agricultural sector - which are central to our ability to compete on a global scale.

"Having an endorsed strategy will help the State government apply for further commonwealth funding for regional transport infrastructure.

Ms Saffioti said a co-ordinated approach had already had "some success" with the 42 shires that participated in the Wheatbelt Secondary Freight Network review obtaining a commitment in April for $70m in commonwealth funding.

She acknowledged that while the State government could aim for improvements in efficiency in rail transport of bulk agricultural commodities, it had no control over the cost of using rail to freight commodities and that situation was unlikely to change in the near future.

Arc Infrastructure, part of the Canadian controlled multi-national Brookfield conglomerate, still has 30 years to run on its lease of WA's freight rail network which enables it to set freight rail charges.

CBH Group, which accumulates 90pc of WA's grain, has been locked in an arbitration battle with Arc Infrastructure for more than three years trying to reach an agreement on a costs schedule for the next 10 years to run its grain trains on Arc's tracks.

"CBH has given practical and programtic imput to the development of the strategy, including data on forecast grain production growth and efficient freight operating principles for its supply chain,'' Mr Macnamara said.

"We look forward to continuing our engagement with the department to achieve outcomes that will have lasting impacts for the State's grain growing regions.''

Mr West said that local councils needed help with commodity freight routes, many of which were their responsibility as local roads to maintain and upgrade, although the bulk of the traffic may be generated outside of the shire.

"It's important we put State government investment into those (local roads)," he said.

"It also helps create local jobs and helps local economies by doing that work locally, but ultimately it gives us better, safer and more efficient roads."

THE 20 secondary freight roads to be upgraded over the next two years with $10m allocated in this year's State budget are:

Shire of Dandaragan: Reconstructing and drainage improvements to 1.7km of North West Road in 2019-20.

Shire of Dowerin: Reconstructing, resurfacing and drainage improvements to 3.3km of Dowerin Koorda Road in 2019-20.

Reconstructing, resealing, reshaping and drainage improvements to 1.04km of Mather Road in 2019-20.

Reshaping, resurfacing, stabilising and drainage improvements to 2.38km of Dowding Road in 2019-20.

Town of Narrogin: Stabilising and resealing 2.83km of Cooraminning Road in 2019-20.

Shire of Pingelly: Geometry improvements and widening to 2.79km of Wickepin-Pingelly Road in 2019-20

Shire of Plantagenet: Resealing and stabilising 5.89km of Woogenellup Road in 2019-20.

Shire of Wongan-Ballidu: Reconstructing and widening 2km of Hospital Road in 2019-20.