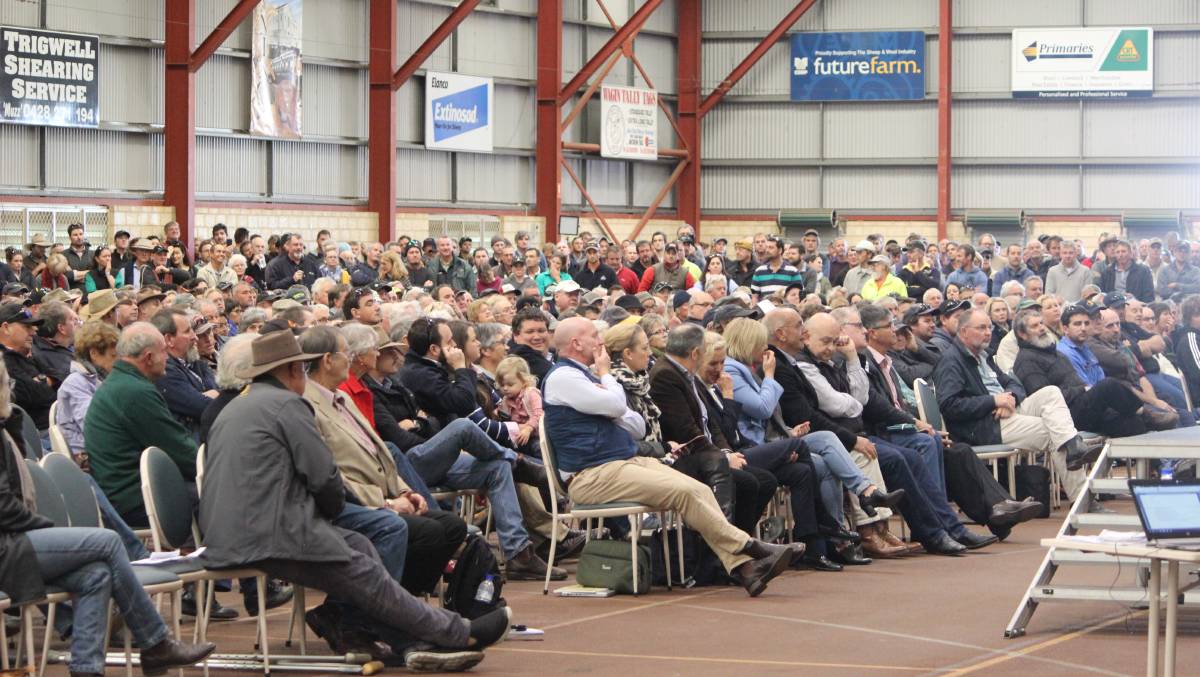 Part of the strong crowd that attended the live export forum in Katanning last July. At that meeting WA Agriculture Minister Alannah MacTiernan said the industry should consider a plan B for the future a position she reiterated at the WA Shearing Industry Association conference in Perth recently.

FARMERS have to face reality.

That's the view of State Agriculture Minister Alannah MacTiernan when it comes to the future of the live sheep trade in WA.

Ms MacTiernan gave the opening address at the WA Shearing Industry Association in Perth recently where she said the industry had to "be very realistic about the live sheep trade and where it is headed".

"My argument has always been - any industry has to have a plan B," Ms MacTiernan said.

This reinforces the message the minister delivered to the WAFarmers organised live export forum in Katanning last July, something the majority of the 1300 producers and industry representatives did not want to hear at the time.

"Personally I think over the next 10 years live export will fade away," Ms MacTiernan said.

"It will just become really economically unviable - that's really what I believe and I have to tell you the truth."

Ms MacTiernan said the industry needed to "look at where the market is going and make sure you are well positioned for the market".

"We have to look at what the trajectory for the live sheep trade is, and that has been declining quite dramatically over the last 10-15 years," she said.

"It is now down to about 19pc of the industry (from an estimated 30pc last year).

"Of the sheep turned off into the supply chain this year - live export is down to about 19pc."

Ms MacTiernan said the reduction would continue on the back of a three-month moratorium now in place from June to August which she described as "a permanent fixture".

She said other factors to consider were the new Australian Standards for the Export of Livestock (ASEL) requirements for exporters which incurred more costs on businesses and impacted on the viability of the trade, as well as the competing domestic demand for lamb and mutton.

"It is going to be very difficult for the live export industry to continue to compete price wise with the amount of money that is being obtained ($250 a head saleyard lamb price average across the State in the past few weeks)," Ms MacTiernan said.

"We also know there are many ASEL standards implemented following the collapse of the integrity of the system (after the Awassi Express incident came to light in April 2018) - there has now been very strong rules put in place and the real impact of those is yet to be determined.

"I think that it is not going to get cheaper to do live export - there will probably be further reduction in stocking densities and you are required to have independent monitors etc.

"That's going to take a couple of ships out of operation.

"There's also new IMO (International Maritime Organisation) rules coming in with the use of bunker fuels and given most of these vessels are very old it's going to be a further cost on top of that shipping."

The Nationals WA responded to Ms MacTiernan's comments saying the industry needed "a Premier and an Agriculture Minister who will back this industry 100 per cent to instil confidence back into the sector".

Member for Roe Peter Rundle said any hesitation by the government in support of the industry would have a detrimental effect on income and planning.

"Until we get an assurance from the State Labor government to support the live export trade, the industry is still well within their rights to be concerned about their future," Mr Rundle said.

He recently questioned the Premier Mark McGowan on the government's support of the live export industry "following the overwhelming Federal election result".

Mr Rundle wants to know if the State government would "abandon its anti-live export rhetoric and provide support and certainty to the industry".

"Given the overwhelming result indicating support for the continuation of live export, I asked the Premier to make a commitment to the industry.

"When he finally got around to addressing the question, he failed to show any support for the famers and 3500 people employed in the industry."

In his response Mr McGowan urged the industry not to "become complacent and think that public concern about this issue has dissipated".

Mr Rundle said these comments were insulting to the industry.

"Everyone in the industry knows the safety and welfare of the animals in live export is of the highest priority, and the industry demands exceptional standards from every level, as does the public at large," Mr Rundle said.