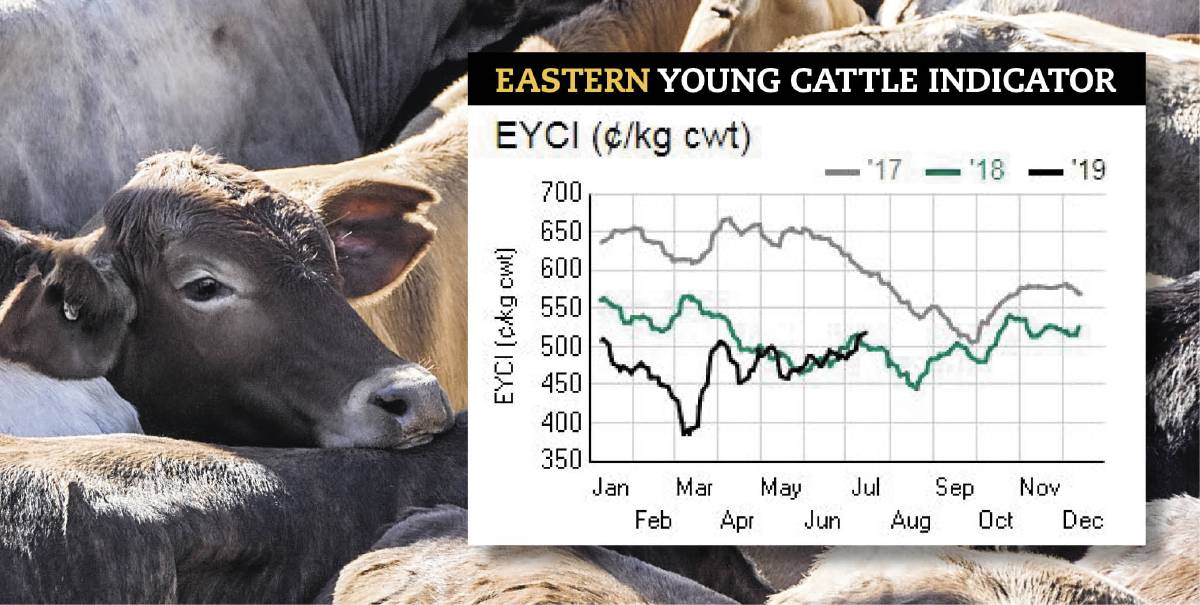 The Eastern Young Cattle Indicator has been rebounding in recent weeks. The graph shows the 2019 EYCI trend compared to 2018 and the highs of 2017. Source: MLA

Strong demand from processors for heavy cattle and the enduring positivity of restockers has produced a handy mid-winter cattle market rally.

Prices have lifted at both ends of the market, with weaner steers rebounding at Roma this week and premiums continuing for categories such as fat cows, heavy steers and even bulls.

"I counted nine processors trying to buy cows on Tuesday," he said.

"I don't think I have ever seen that."

Mr Close said the cow market was starting to feel the competition from southern buyers as processors scrambled to secure supply.

"We have been talking about this happening for so long and it's finally here," he said.

"They are at the bottom of the cow numbers in NSW and those buyers are having to come to this market because that's where we are still presenting big numbers of slaughter cattle."

But it wasn't only heavy stock attracting buyer attention at Roma this week.

Lighter steer categories were also firm to dearer, with medium weight yearling steers under 330kg topping at 307 to average 287c/kg.

"There is a lot of speculative people putting cattle on rations to get them up to feedlot weight because they know how short that supply will be going forward," he said.

"I don't think our market is as dear as what we are seeing at Roma. Very good Angus steer calves would be making around 300c/kg at the moment but most would be around that 260 to 290c/kg," he said.

"We have had the big selloff and we are back to just core breeders being sold and weaners that people would rather be keeping."

Gunnedah agents yarded 2200 head at their prime sale on Tuesday and Mr Scicluna said the upward trend for heavy cattle was pronounced.

"It's all driven by both northern and southern processor competition," he said.

Mr Scicluna said the good money on offer would most likely entice producers to offload cattle now rather than continue feeding.

"I think we'll see people take the money rather than buy more feed," he said.

Meat & Livestock Australia senior analyst Adam Cheetham said an improvement in the market at this time of year was in line with previous trends but still notable given current seasonal conditions and the outlook.

"We have seen the usually spring rally....which is an element of restockers hoping for that spring break," he said.

"It's not as pronounced this year and it is predominantly being driven by markets for restocker cattle - vealer and yearling steers going back to the paddock.

"It's opportunists buying in the north - those who have feed or who will potentially have feed should things improve."

"The Victorian market has strengthened and that's been a real driver driving force over the last few weeks in the finished cattle market but also with the young cattle market also," he said.

Mr Close said the strong prices would provide options to producers under pressure as winter crops faltered across large areas of NSW and Queensland.

"Producers will be well rewarded," he said.

"We had to get some competition into the market and it's great to see it holding."

"I have covered a little bit of country in the last month and there is more bad than good," he said.

"But the fear of lack of numbers come spring time given an early break is certainly driving the market."

Mr Holm said it was good news for producers who needed to lighten off.

"At least there is the opportunity for them to destock at reasonable rates again," he said.

"Rocky is as dry as it gets but there are parts of central Queensland that are quite good and that have good oat crops.

"There will be some supply of heavy feeders as we go forward but it may just be later than normal."