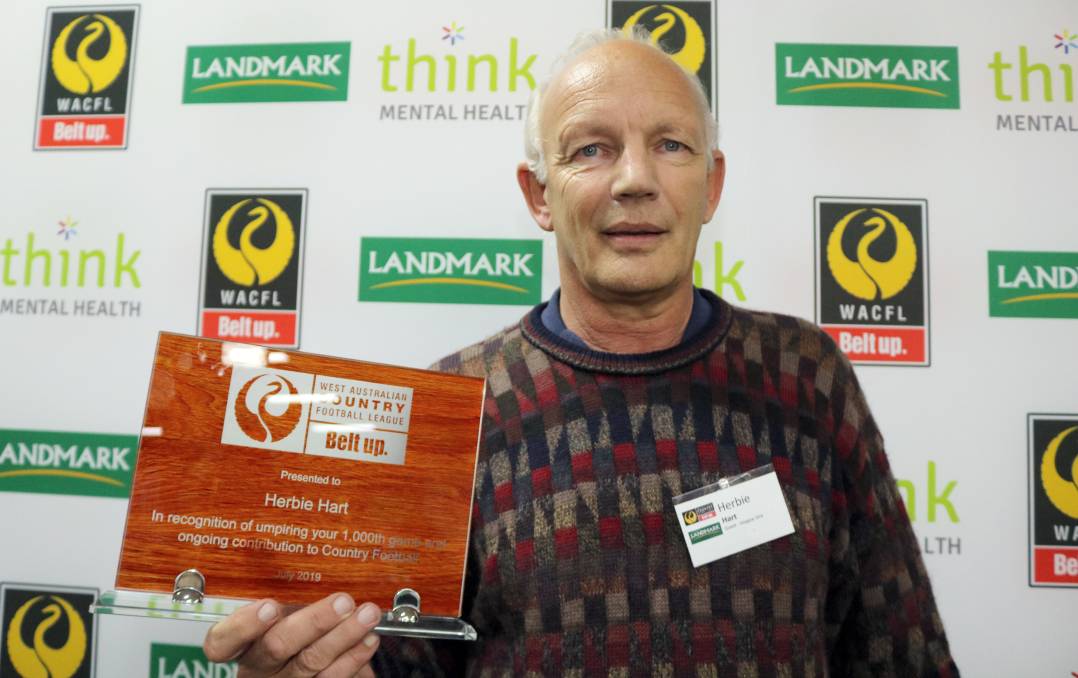 Herbie Hart, Albany, shows off the award that recognises his 1000 games as a WA country football umpire.

Mr Hart started umpiring in the Ongerup Football Association (OFA) in 1987 and on May 18 this year, he officiated his 1000th game in the match between Boxwood Hill and Jerramungup, at Boxwood Hill.

It was a memorable day for the 64-year-old who now lives in Albany and every weekend in winter makes the three-hour journey to umpire in the OFA.

Before he took up the whistle, Mr Hart started playing for Narrogin Railways in the Upper Great Southern (the team was later renamed the Narrogin Eagles before it merged with the Narrogin Lions to form the Hawks in 2004).

"I only played seconds footy," Mr Hart pointed out.

"My first year was 1977 and I scrounged 150 games and, of course, the year I left they won the premiership."

Mr Hart went back to the club after his playing days were over and helped out in various roles such as water boy, runner and boundary umpire, before realising the colts needed a good field umpire.

"I started helping out and got a bug for it," he said.

That was in 1987 and Mr Hart initially helped out his local club before joining the local umpire panel the following year.

By 1990 he was officiating in both the Upper Great Southern Football League and the OFA games on the same weekend.

"For 25 years I was doing the two leagues each weekend and for the past five years I have slowed down," he said.

Initially Mr Hart was living in Narrogin and while he relocated to Albany in 1995, he continued to return to his old stomping ground.

He has umpired across many other leagues, including the Great Southern and Ravensthorpe and District competitions.

Mr Hart has umpired in 39 country football grand finals, including 23 League grand finals and there have been many other highlights as well.

"In 1992 I came up here (to Perth) for my first Wesfarmers championship (now called the Landmark championship) and I managed to get the A grade grand final that was a preliminary to the Eagles versus Sydney game," he said.

"That was good, especially when a young player by the name of Joe Smith ended up playing for Claremont - he was taking screamers and the crowd was going wild - there were about 10,000 people there and that was an early highlight.

"I have done 39 grand finals and they probably all ran into each other (as far as highlights go) and I have seen a lot of good players."

Mr Hart has hinted his umpiring days could be numbered and at the start of the year suggested this would be his last.

But at last week's award ceremony he conceded there was a bit of pressure from some OFA officials for him to go around again next year.

"We will wait and see what happens at the end of the year," he said with a wry smile.

Mr Hart's fitness regime between games is mainly doing a lot of walking during the week and he said he pulled up fine after the weekend was over.

The biggest challenge after getting home from a game was getting out of the car he had been in for three hours.

As for the transition in the early days from player to umpire, he admitted there were a few raised eyebrows - including from his wife.

"She thought of all the things in football that was the worst thing because I used to abuse the umpires, but only on TV," he said.

"But you don't get into the game to get these sort of awards," he said.

In parting he had some advice for people who are considering taking up whistle blowing at a country football game.

"The hardest part is for players to umpire when they umpire their own team," he said.

"You can't win because there will always be one team that says you are favouring your team.

"If you can get through that stage and go and umpire neutral games, just give it a go."