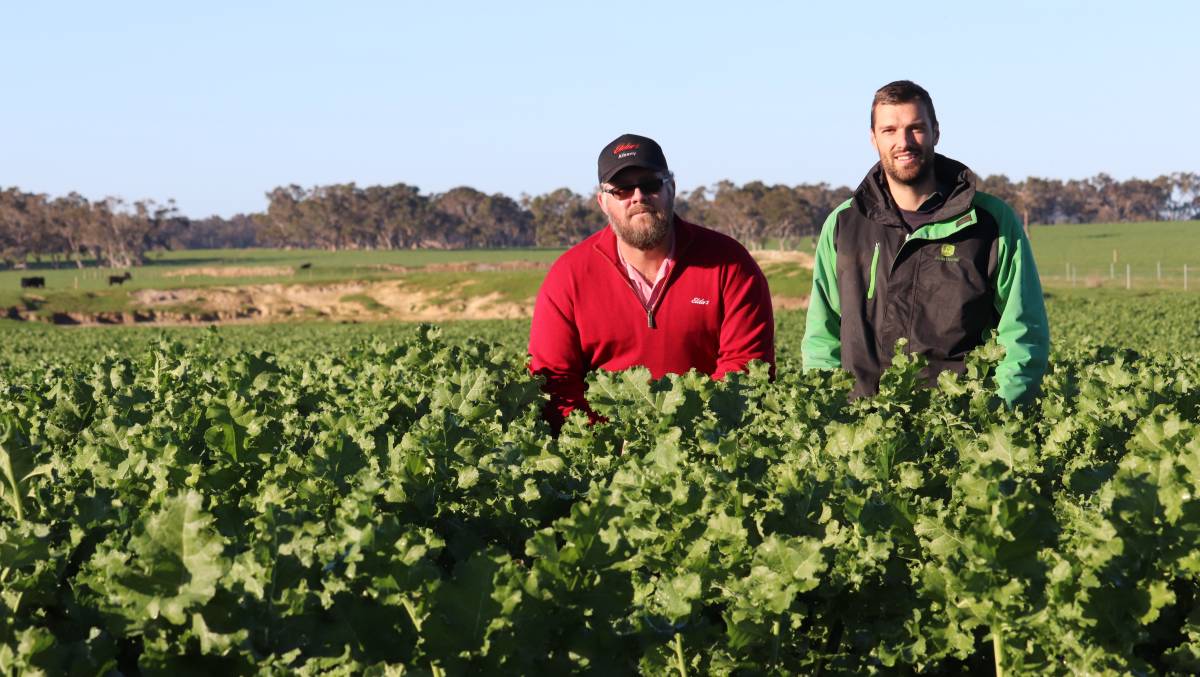 A new forage brassica is making an impact in the Great Southern with early trials showing good potential for sheep and cattle grazing systems.

A NEW forage brassica is making an impact in the Great Southern with early trials showing good potential for sheep and cattle grazing systems.

Pallaton Raphno is a New Zealand-bred species that was first developed in 2002 and is a hybrid between kale and forage radish.

Early trials in Australia have shown it has the ability to survive four to five grazings over a 12-month period.

While it sounds too good to be true, the Metcalfe family at Manypeaks has hosted one of the first trials of the Pallaton Raphno and Tim Metcalfe, despite admitting he was sceptical at first about the grazing potential, said its performance had been incredible.

"We trialled it in a pretty ordinary kikuyu paddock, which was sprayed out with Roundup and Lorsban for African black beetle," Mr Metcalfe said.

"We then ploughed the paddock three times with a Grizzly plough and so the soil was a bit fluffy and non-wetting when we seeded the Pallaton Raphno with a disc pasture seeder."

The Pallaton Raphno went in at eight kilograms a hectare in early November and Mr Metcalfe said it received 50 millimetres of rain in December which really got it going.

The Metcalfes applied 75kg/ha of urea to it and just before Christmas some steers went on to it and trimmed it back.

"Just after Christmas we put 250 lambs on to it, which was the tail of that drop,'' Mr Metcalfe said.

"The lambs did well on it, but they also grazed it hard and chewed it right down to the stumps.

"There wasn't a lot of leaf matter left and we weren't sure how it would respond from that grazing."

With literally no rain in January and February, growth was slow but another storm delivered moisture in March and another 75kg/ha of urea was applied and Mr Metcalfe said the Pallaton Raphno went "bananas".

"It was about a three to four week period where it went from nothing to good bulk," he said.

On April 4, 35 steers were then put onto the site but this wasn't enough to get on top of it, so they added more steers several times until there ended up being 87 being run on the six hectare plot.

"That held them for five to six weeks and then we took them off and locked it up again until last week when we put another 137 steers on it," Mr Metcalfe said.

"We hope to get another four to five weeks out of it before we lock it up again and hopefully set it up for another grazing."

Mr Metcalfe said seeing the results they had so far had prompted them to plan to sow 60ha of Pallaton Raphno this year.

"We are always looking for something to fill that summer and autumn feed gap and we have probably been leaning more towards the silage option lately," he said.

"Now that we have seen this perform we will change our planning and drop some of that silage out of the program.

"If we grow enough Pallaton Raphno we may not need as much silage if we can feed the young cattle on this through the summer.

"Also we won't be locking up as much country through the spring which gives us more flexibility."

Elders Albany agronomist James Bee has been co-ordinating the trial with the Metcalfes and said forage brassicas were a good fit for the South Coast.

"If you get that summer rain it will do well," Mr Bee said.

"This year has been a good test for it because it has still done well in tough conditions.

"It did get a good start but it was pretty warm and dry here in January and February and it grew well with little summer rain.

"We had a summer mix planted next door to it, that included millet, chicory, leafy turnip and red clover and the turnip didn't persist in January and February, it turned up its toes.

"The Pallaton Raphno must have a good regulation of moisture, it was chewed down to the stump by the lambs and it started to reshoot with what little moisture it did have."

Mr Bee said it had the potential to add diversity to mixed enterprises.

"You can seed it in spring or autumn and the fact that you can stock it quite heavily means you can lock other paddocks up and give them a rest and that is a huge benefit at certain times of the year," he said.

"One of the options of using a brassica is that you can use a grass selective to take out the kikuyu, so it can be reseeded with ryegrass later on and it is a good way to clean a paddock up."

At a cost of $285 a hectare, Mr Bee said it wasn't cheap but given the production that could be gained off it, it was worth an assessment by graziers.

"The Metcalfes were stocking it at a 60DSE rate and this will be third grazing it has been through now, so the production is certainly there," he said.

PGG Wrightson Seeds sales agronomist Nathan Tognela said Raphno had been trialled in WA since the spring of 2016 and would be released on a widespread basis from this year.

"It is the first new brassica species released in 32 years," Mr Tognela said.

"At this stage it looks to be best suited to rainfall zones of 600mm plus and it does very well in sandy soil types and handles poorer soils."