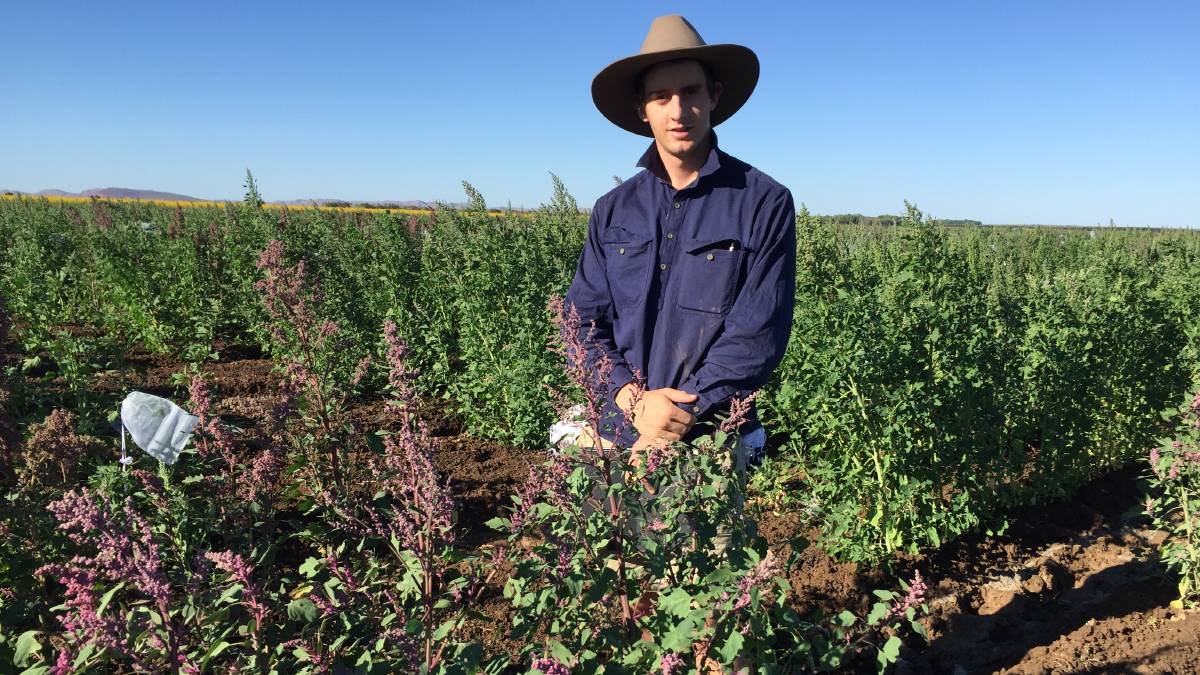 Growing up in Bunbury and spending all of his school holidays on his family's 300 hectare beef cattle farm at Balingup and Greenbushes, Jordan Dwyer didn't consider agriculture as a career path when he finished high school.

GROWING up in Bunbury and spending all of his school holidays on his family's 300 hectare beef cattle farm at Balingup and Greenbushes, Jordan Dwyer didn't consider agriculture as a career path when he finished high school.

Instead he went straight to Bunbury TAFE to study a diploma of civil/structural engineering.

"I finished school and had no interest in going to university, so I opted for a one year TAFE course instead," Jordan, 26, said.

"I was quite good at maths and problem solving, so agriculture never really crossed my mind."

Jordan worked as a structural engineering draftsperson for five years at a Bunbury firm, taking a year off in the middle to travel to Banff in Alberta, Canada, for a working holiday.

"I was 21 and after a couple of years working as a draftsman I went over there to do some travelling and as a bit of a circuit breaker," he said.

When he returned home, Jordan resumed his role as a draftsman, working on residential, commercial and industrial projects, both locally and further afield.

But he soon fell out of love with his career path and started mulling over his options.

One night at the dinner table his sister suggested he study agribusiness at Curtin University.

"I always loved agriculture and farming from a young age, but had never considered it as a career pathway until she suggested it," Jordan said. 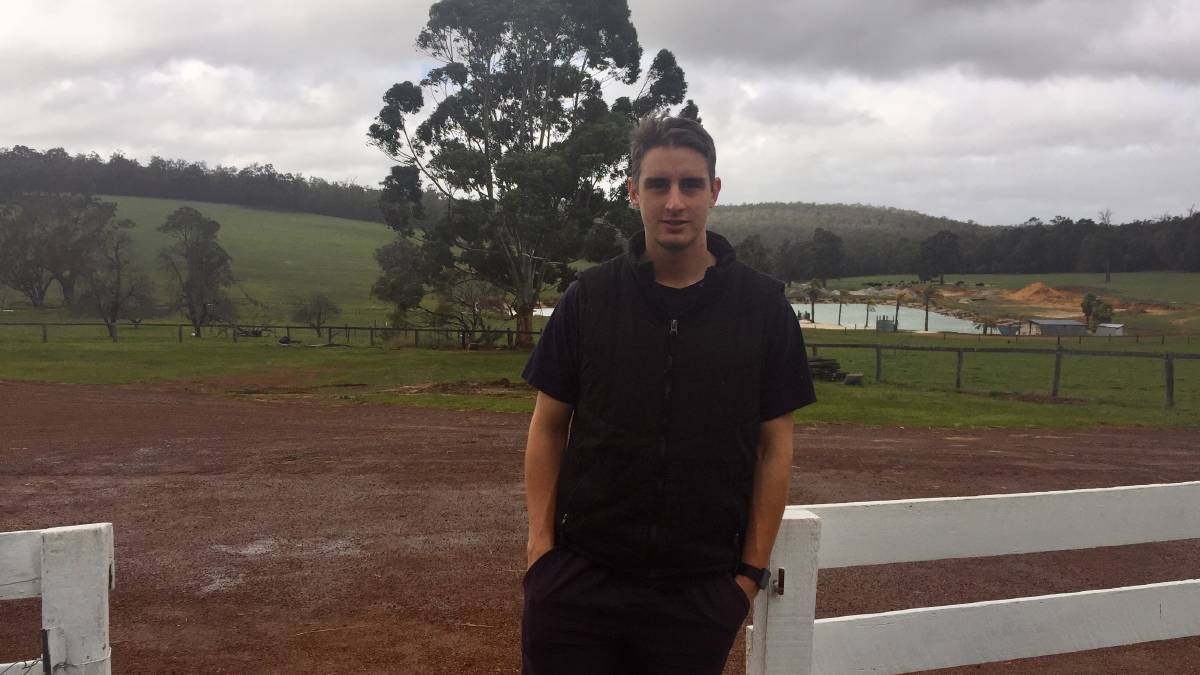 Jordan Dwyer at his family's farm, Ferny Hollow, which celebrates its centenary this year.

Realising it was a no brainer, in the space of three months he enrolled at Curtin University to study for an agribusiness degree.

Any fears or second thoughts he had about the change in direction quickly disappeared once he began his studies.

And Jordan clearly has a knack for the industry, last year winning Curtin's Agribusiness Regional Work Experience Scholarship, where he travelled to the top end of Western Australia to complete two weeks work experience with the Department of Primary Industries and Regional Development (DPIRD) on Kununurra's Ord River irrigation scheme.

"For the application we were required to create our own itinerary, detailing where we wanted to go and with which organisation," Jordan said,

"As the winner I received $5000 to cover my trip expenses.

"I always wanted to see Kununurra and the Ord River and it's not until you get up there you realise what a different country it is.

"I spent a few days at the Ord River research station, travelled to Wyndham to do fly trapping for a monitoring program, visited the quarantine yards and cattle stations with the livestock compliance officers and assisted with blood sampling of a sentinel herd."

During his time up north, Jordan got a taste of what it would be like to live and work in Kununurra.

"A few of us at the research station would knock off about 3.30-4pm and go 'barra' fishing on the Ord River at the back of the station," Jordan said.

"A few salties would swim past us in our three metre tinny every now and then.

"During the dry season it's quite a nice place, if you could get a six-month contract up there, that would be ideal."

While there, Jordan tacked on another two weeks work experience at Lake Argyle cattle station with Consolidated Pastoral Company (CPC).

"I would go around with the ringers and that was really interesting," he said.

Thinking about the future, Jordan said he would be happy to work anywhere to get his foot in the door, but would eventually like to be based in the South West where the majority of his family is.

Being one of 22 grandchildren and his mum one of eight kids, Jordan comes from a large family.

His uncle, the only son in his mum's family, runs the family's farm, Ferny Hollow, which celebrates its centenary this year.

The Angus farm has about 120 cattle and is spread over three properties that are owned by the family's trust.

"The farm used to be a dairy farm about 40 years ago and nanna's story was always she had eight children and 80 cows to milk," Jordan said.

His nan and grandad were his first mentors in agriculture and it was their passion and love of farming that sparked his own.

"I learnt a lot from them, not just in farming, but about life," Jordan said.

Due to finish his degree at the end of the year, Jordan said he felt confident to tackle the agricultural sector because Curtin's agribusiness degree course had equipped him with real world skills.

"The degree covers all three key areas of agriculture; livestock, cropping and agribusiness and I enjoy them all, so trying to choose which area I want to specialise in is proving especially difficult," Jordan said.

"But I am leaning towards farm management consulting and livestock."

In one of the course units, Agribusiness Capstone One, students are required to link up with an agribusiness and develop a plan to help improve an area of their business.

With his group of four, Jordan completed a business plan focused on improving wool genetics through selective breeding and monitoring of the flock.

"It was for a mixed enterprise farm in Mount Barker and the farm's owners had already identified wool genetics as an area they wanted to improve, so we used new technologies such as electronic identification ear tags in the project," Jordan said.

His team submitted an environmental scan, organisational strategy, marketing and financial and human resources plans, which were then assessed by a panel of industry experts.

"The unit gave us the opportunity to use everything we had learnt in the first two years of our degree and apply it in the real world," Jordan said.

"In the projects presented to us, there was an emphasis on adopting technology in livestock businesses to improve productivity, diversifying existing businesses to develop new enterprises and improving existing physical infrastructure to benefit animal welfare," Mr Heather said.

"The unit forces students to make choices and develop strategies to deal with the consequences of those choices.

"Some students dealt with this better than others and the ones who have an innate ability to thrive in an environment of uncertainty are the ones who will have the creativity and resilience to lead WA agribusiness into the future."