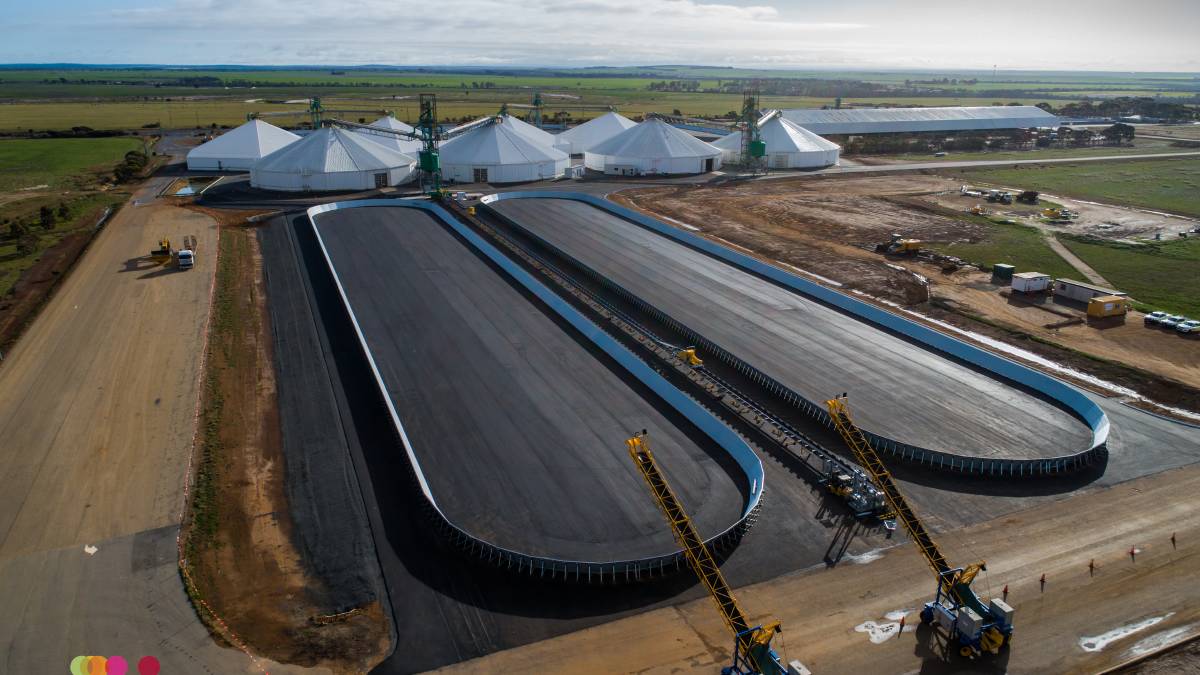 A drone shot of the new storage capacity at the CBH Gairdner bin. The two new bulkheads will offer increased capacity of 46,800 tonnes and will mean the Gairdner bin can now hold a total of 293,000t. Photo: Harley Dykstra.

An increased 46,800 tonnes of capacity was unveiled to growers at the Gairdner CBH bin last Friday.

AN increased 46,800 tonnes of capacity was unveiled to growers at the Gairdner CBH bin last Friday.

The event marked the first permanent storage expansion project to be completed by CBH for this year's harvest as part of the co-op's network strategy.

Expansion works included the construction of two open bulkheads that have a combined storage capacity of 46,800 tonnes and takes the total storage capacity at the site to more than 293,000t.

Throughput enhancements installed at Gairdner include a conveyor loading system with two stackers positioned at the new open bulkheads, which will increase the rate that grain can be received from trucks.

In addition, an existing conveyor system at the site is being upgraded to receive grain at an increased 500t per hour.

The expansion is part of CBH's ongoing investment into the network, with more than $150 million budgeted for capital works this year which will add more than 800,000t of new permanent storage to the network and associated inloading and outloading equipment.

"This is the biggest spend ever in CBH history and it is a pivotal point in the co-op," Mr Badger said.

"CBH has never been afraid to spend upfront to ensure a legacy lives on for generations of growers.

"We are focused on the top 100 sites in the State as it is these top 100 sites that do 90 per cent of the grain, so what we are seeing is a natural consolidation to those sites anyway.

"CBH has targeted those sites and that is where the capital goes.

"We are about halfway through the network strategy process, but the run of large harvests we have had since we started it has slowed the decommissioning of sites down as we have needed to use them for emergency storage.

"But when we build storage like this, it takes the slack off and you will see a few of those sites go in the next few years."

CBH Albany Zone manager Adam Wray also spoke to growers and updated them on the recent results of the Paddock Planner response.

"This area did 115pc more hectares estimated through Paddock Planner than the area had ever done before," Mr Wray said.

"This is the best response area in the entire CBH system so I want to thank everyone who contributed to that as it helps us do our estimates better, to make sure the segregations are in the right place and to makes sure you as a collective drive the least distance and spend the least amount of money on freight."

CBH general manager project delivery Pieter Vermeulen said practical completion of the storage expansion at Gairdner was achieved at the end of July 2019.

"We're very pleased to be able to complete the expansion at Gairdner on schedule," Mr Vermeulen said.

"The Project Delivery team is currently working closely with the Operations team to ensure a safe and smooth handover process that will pave the foundation for a good start to this year's harvest."

CBH general manager operations Ben Macnamara said investment into the network would continue to evolve to meet the requirements of growers.

"With the new storage and increased throughput capacity at Gairdner, we will be able to offer growers improved services and the option to offer additional segregations," Mr Macnamara said.

"This is especially important in this region which continues to see steady growth in grain production every year.

"By continuing to invest into the network, the co-operative can keep its network fees competitive, increase throughput capacity and efficiency and meet export demand at the right time to capture value for our growers' grain."