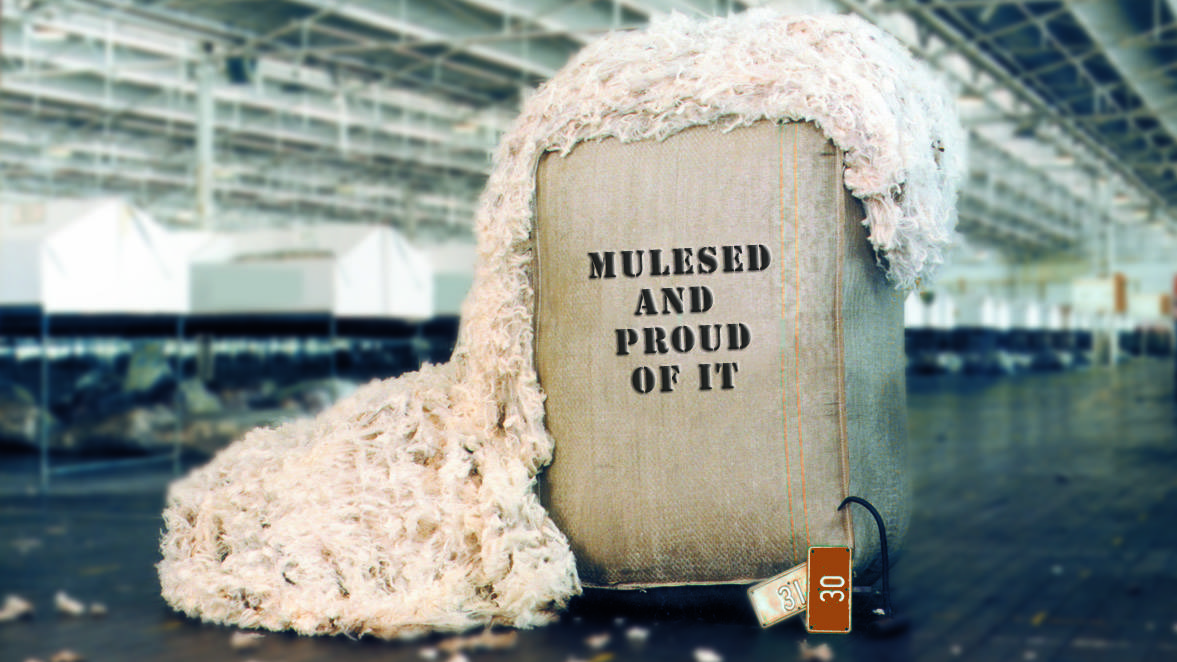 Low local volumes of declared ceased-mulesed and non-mulesed wools makes it "much more difficult" for traders to put together consignments avoiding mulesed wool in WA than in Eastern States, a study has found.

LOW local volumes of declared ceased-mulesed and non-mulesed wools makes it "much more difficult" for traders to put together consignments avoiding mulesed wool in WA than in Eastern States, a study has found.

They also trail Eastern States counterparts in declaring use of pain relief - PR on the NWD - when lambs are surgically mulesed.

According to Mecardo researcher Andrew Woods, only four per cent of Merino fleece sold in WA in 2018-19 was declared as CM or NM.

This compared to a national declared CM and NM average of 13pc, Mr Woods said.

To be eligible for CM status, no lambs born on the property in the last 12 months have been mulesed and no purchased ewes or wethers are mulesed.

Generally, Mr Woods pointed out, the percentage of declared CM or NM wools, as a proportion of the fleece wool sold in each microns market sector last season, increased as the fibre diameter decreased.

For example, up to 91pc of the Superfine 13-microns sector was declared CM or NM nationally, but comprised only a tiny proportion of wool sold - just 0.003pc of the total clip.

This increased percentage of CM and NM wools in finer microns sectors was replicated in WA, the Mecardo research found.

The percentage of CM and NM wools also increased both nationally and in WA in the 22-microns and broader wools sectors, with the higher percentages in WA this time, the research found.

But Mecardo's research indicated across the main 17-21 microns spread in WA, which covers most of the wools produced here as the clip average last season was 19.3 microns, the percentage of declared CM and NM wools ranged from about 3pc to about 5pc.

In contrast, the percentage of declared CM and NM wools in the Eastern States across the same microns spread ranged from about 18pc at the finer end to about 6pc at the broader end.

"The supply of CM and NM (wools) in Western Australia remains at low levels and makes the construction of mill consignments that avoid mulesed wool much more difficult," Mr Woods said in his report.

"Only one in 25 bales of Merino fleece wool (in WA) is declared CM or NM and that is before all the normal specification requirements (of) micron, length, strength, mid-point break, yield, vegetable fault and so on, are taken into account.

"There is scope in these (finer Eastern) micron categories for the supply chain to plan to use CM or NM wool from Australia," he said.

Declared use of pain relief in both WA and Eastern States was much more evenly spread across the micron ranges than CM or NM declarations, he pointed out.

Mr Woods said the research indicated buyers had paid a definite premium of up to 3pc last season for higher strength finer wools of 16.5-17.5 microns that were declared CM or NM.

There also appeared to be a rising trend in the premiums for these wools beginning part way through the 2017-18 season, he said.

But he said it was difficult to assess premiums for an NWD characteristic like CM or NM because varying specifications and demand also affected the price buyers were prepared to pay for specific wools.

The statistics show the biggest season-to-season increases in completed NM declarations were in 2013-15.

AWES's statistics show a further 2.5pc of last season's clip was declared CM, indicating the rate of farmers moving away from mulesing as a flock welfare management tool may be slowing.

In 2016-17 the declared CM proportion of the clip was up to 2.9pc and in 2010-11 it was 3.1pc, but it is not clear from the statistics whether the declining rate of declared CM is due to greater reliance on plain or bare breech breeding and other alternative flock management techniques.

Pain relief for mulesing was declared administered for 35.6pc of last season's clip, the highest percentage since 2010-11 when it was just 8.4pc.

Last season, just under one third of woolgrowers did not declare the mulesing status of their flock on the NWD, the AWEX statistics show.

In 2010-11 almost two thirds of woolgrowers did not declare their mulesing status.

But the AWEX statistics also show WA woolgrowers are the least likely in Australia to complete an NWD - introduced 11 years ago.

Last season 40.3pc of the WA wool clip was sold with a completed NWD and that percentage has remained relatively static since 2010-11 when 36.5pc of the clip came with an NWD filled out.

In comparison, 82.3pc of the much larger Victorian clip and 81.6pc of the smaller Tasmanian clip was accompanied by completed NWDs and the national average of completed NWDs last season was 70.2pc.

AWEX is currently reviewing the NWD and has engaged the Industry Services Advisory Committee (ISAC) to conduct the review.

It is looking at the "relevance" of the NM, CM, M, and PR declarations, whether other "breech modification alternatives" or "animal welfare" declarations should be added, the adoption rate of the NWD and compliance with the declarations and whether the integrity program should include "desktop" audits and on-farm inspections.

"That's the most submissions we've ever had on a review," Mr Grave said.

"ISAC has had one meeting (to consider the submissions) and there will probably be a second meeting in early September, there is no specific time frame but my expectation is that the review will be completed by the end of the year," he said.