A new, heavier duty three metre-wide Reefinator, will be unveiled at the Dowerin GWN7 Machinery Field Days on Wednesday, August 28 and Thursday, August 29. 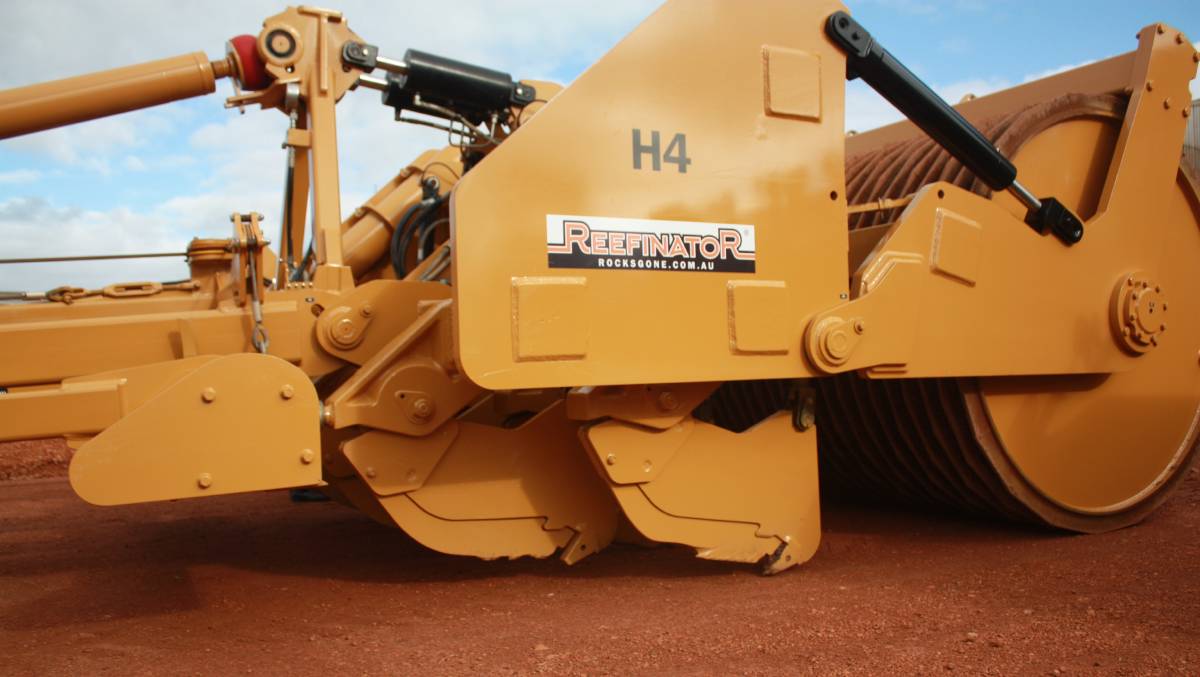 The heavy duty tynes employ hydraulics with the hydraulic cylinder directly over the tine to provide a one to one reactive force. In the background and mounted on the inside frame is a 32 litre accumulator designed to handle up to 3000psi pressure.

A NEW, heavier duty three metre-wide Reefinator, will be unveiled at the Dowerin GWN7 Machinery Field Days on Wednesday, August 28 and Thursday, August 29.

And it will turn heads.

It is the result of more than two years of research and development, involving more than 2500 hours of testing in a range of rocky soil types from granite, hematite to magnetite and sheet ironstone.

Designed by former Yuna farmer and Rocks Gone managing director Tim Pannell, it has been manufactured by Cutts Engineering, Manjimup and is considered the answer to working deeper in a wider range of rock types and hardpans, expanding applications unable to be achieved by the original Reefinator.

It also has been designed to work through stubble, with tynes set at 335 millimetre spacings and opens up a whole new way of renovating paddocks for pasture and cropping.

"Initially we were aiming to design something specific to deal with the very tough basalt throughout Victoria and New South Wales but over the two years of testing around different parts of Western Australia we realised it was going to have a much wider application and was going to be perfect for the areas in WA that needed something with a bit more grunt and could dig deeper," Tim said.

"Eastern States farmers have shown interest in a machine that can get in deep into tough basalt rock which forms part of a lot of cropped and pasture country as opposed to our mainly laterite country in WA and the limestone in South Australia.

"It has been designed to rip soil that has never been ripped at depth before, not like a deep ripper as such, but a primary ripper, the first ripper across untouched land.

"But it is a completely new design from the original 300 Series Reefinator.

"We're calling it the H4 Series with the H designating that it's a hydraulically-operated machine, so there's no shear pins on the tynes and the four designating it's the fourth prototype model which we are happy to take into commercial production.

"There are four leading tynes and five at the rear with a new cable-suspended levelling blade that levels out the crushed soil and rock and acts like a smudge bar before the tynes get to them".

The cable design was the preferred option to prevent undue stress on the hydraulic cylinders.

The tynes are hinged on cast steel housing with a 55 millimetre pin.

"The shear pin in the 300 Series had to be designed to break but you could get up to 22.5 tonnes before it broke," Tim said.

"With the hydraulics you don't need the shear pin because it's a live action process with give and take."

The hydraulic system features a 32 litre accumulator designed to handle up to 3000psi pressure, but Tim said the working pressure range was generally between 1000-1500psi.

"Pressure can ramp up quickly and with smaller hoses, oil can't escape fast enough from the cylinder," Tim said.

The H4 will dig to a depth of 450mm, as opposed to the 200mm maximum depth for the 300 Series, with the ability to raise the front leading rank of tynes to go deeper and quicker.

But you'll require a four-wheel drive tractor boasting a power rating in excess of 336 kilowatts (450 horsepower), or budget on at least 298kW (400hp) if you have a track machine.

According to Tim, wheels are better on rocky country, with working speeds between eight and 12 kilometres an hour, depending on conditions.

Tyre pressure varies between eight and 13psi while a feature is the heavy duty "industrial" cushion hitch, designed to absorb harsh forces.

Force dissipation is inherent in most components.

"One of the big advantages of this machine is that it smashes roots and during our testing the total number of roots I carted away would only have filled a ute tray," Tim said.

"This machine drags over anything because of the hydraulics and you don't usually need to ease the pressure.

"If you hit a blue granite rock, for example, the tynes just float over it as long as you haven't set the pressure too high and you just keep going.

"This makes a big difference in productivity because it's less jerky with almost no catching or dragging."

Tim said the H4 was also designed for road-building on mines or site preparation.

"Basically what you get is turning rock into gravel with our laterite rock or sandstone turning into fine gravel," he said.

"There has already been some talk that it could possibly replace drill and blast methods in mining.

"We think so because the current method requires a huge prep (preparation) and costs between $5 and $10 a cubic metre to do.

"We can do it cheaper with the bonus that material is already crushed.

"It won't work in all situations, like granite, for example, but I'm confident it will have a place, even if it's for surface mining applications."

A world patent-pending is in effect.

Tim said the 300 Series would remain in production to cater for increasing demand in WA and South Australia.