Livestock are normally thought of as a problem in the battle to keep weed numbers down, but they can be used as part of the solution. 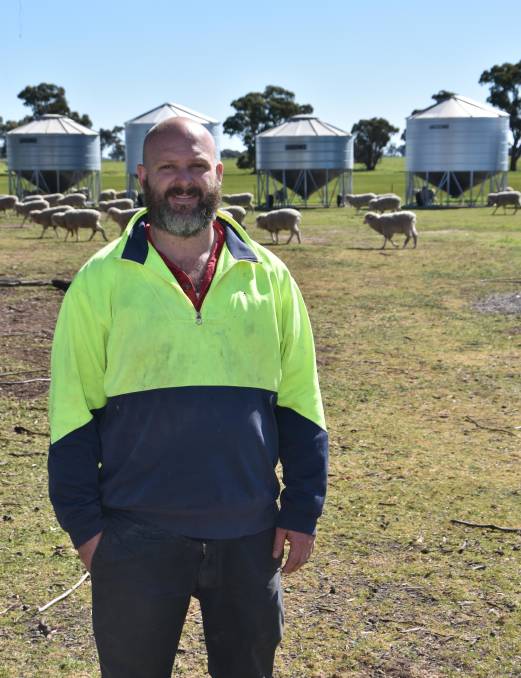 Wimmera farmer Sam Eagle in one of the containment areas which play a crucial role in managing livestock in his family farming enterprise.

WEED management has been a big topic among Australia's croppers for some time but the focus has generally been on cropping only enterprises, with the role of livestock in weed mitigation strategies much less publicised.

However, mixed farmers are finding ways to incorporate their livestock and cropping businesses, make an income and still managing to keep the weed burden down.

"When you have sheep you can do things such as silage as feed for them and that allows you to cut the paddocks up to four weeks earlier than you would for normal hay, so that is a really good tool in terms of cutting down weed seed numbers," Mr Eagle said.

"It also has the advantage you only need three days of good weather than weeks."

He said his family farm operation, located in a traditional grazing area, had been tinkering with ways to on maintaining livestock within the cropping enterprise without an adverse impact on weed seed numbers.

"We've found over the last few years that containment areas have been a really useful tool," he said.

"We now have a number of containment areas we can use and we're comfortable in doing it."

He said there were some things that had to be sorted beforehand, such as vaccinations, due to the containment area meaning a higher risk of disease and then the logistical set-up of the area.

"A six in one vaccine is important and then you need to get your nutrition sorted out, but from then on there is a lot of common sense involved.

"It is definitely best to have the sheep eating up one end and drinking up another and having shade is also very important if you can manage it, obviously over our hot summer months it is a big help, but aside from that the beauty is that your containment set-up can be as simple or as sophisticated as you like."

Mr Eagle said the movement of sheep on his farm was closely monitored.

"You get a weed like Bathurst burr, a classic weed moved by sheep, and if you know you have a patch of it, then its best to just keep the sheep away from that area."

Mr Eagle also said it was important not to overgraze, as often the sheep ate the preferred species, such as clover or ryegrass and left weeds such as barley grass.

"You're then left with a weedy paddock without any competition for the weeds."

In summer, he is careful where he runs sheep over summer in terms of minimising soil erosion, which is where the containment areas come into their own.

Mr Eagle said an advantage of running sheep was that weed control could be profitable.

"With the sheep we can make hay from our weedy paddocks that would not be a good enough quality product to sell and that it is contaminated with weed seeds, but we can simply bale it up and put it out in our containment areas where we don't have to worry about the weeds coming up."

Low quality hay is not the only by-product put to good use.

"We find the screenings from harvest are perfect to put out in the self-feeder."

In terms of weed management, Mr Eagle said it was all about stopping seed set.

He said silage could be left to regrow after being cut and then sprayed out then with a further germination of weed seeds.

Sheep are also used within the cropping system in place of a double knock over summer.

"We find they work well in that they eat everything but brome grass."

While grain and graze has been a popular option for some dual purpose farmers Mr Eagle said he preferred to keep the sheep off paddocks in-crop.

"There is too big a yield penalty, we either grow a paddock to graze or we grow it for grain.

"Other spin-off side effects from grazing are that it opens up the canopy and gives the grass weeds a chance to come back up."

In regards to post harvest weed seed management Mr Eagle said the family was burning windrows, while prior to harvest legumes are desiccated, both strategies undertaken with a view to cutting down weed seeds.