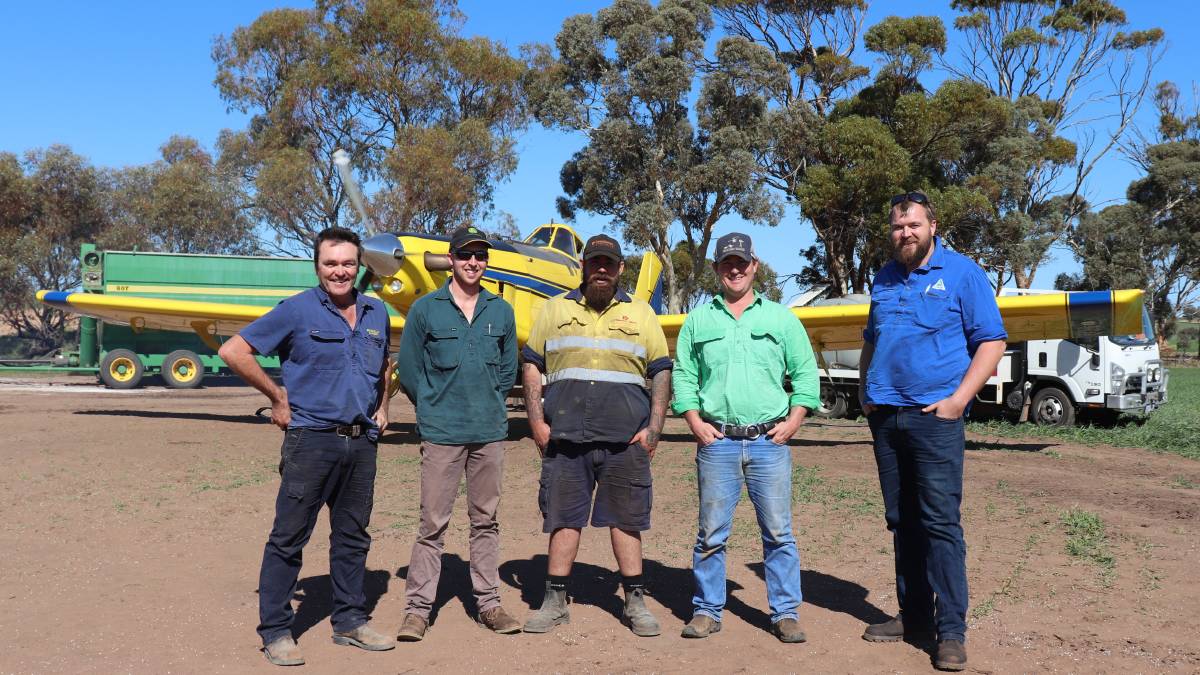 The sky was abuzz with the sound of low flying aviators near York recently as granular fertiliser was applied before the forecasted rains were due to hit the area.

THE sky was abuzz with the sound of low flying aviators near York recently as granular fertiliser was applied before the forecasted rains were due to hit the area.

Two yellow coloured Air Tractors were in operation - skimming the trees and dropping in low over the paddocks - with New Zealand-born pilots Cameron Shaw from Taumarunui, central North Island, and Nick Wyngaarden from Canterbury, South Island, making short work of the job.

The aviators were on contract to Taurus Aviation, owned and managed by chief pilot and Tammin farmer Brad Jones.

The planes carried a 1.2 tonne load capacity, which didn't take long to empty before having to land on the dirt airstrip (which ran down the middle of two paddocks), kicking up a dust storm until the engines were idle.

In a matter of minutes the two-man ground crew had the aircraft refuelled with a mix of diesel and AI jet fuel, topped up with more fertiliser and back into the sky - the sunlight glistening off their wings as they turned in for the next run.

Mr Jones said the team was so experienced they had the job down to a fine art and "what would take the farmer more than a week using ground machinery, we'll do in two days". "And we don't have the impact, like driving over wet spots," Mr Jones said.

"The only thing is we create a bit of noise - but it is also a bit of a spectacle.

Mr Jones said the ag aviation industry needed to "show agriculture what we can do".

"On our farm we use our aircraft for a lot of our operations because of the speed the ease at which we can get things done," he said. Contract Air Tractor pilot Cameron Shaw, New Zealand, in the cockpit during a quick break on the landing strip.

As a veteran pilot (having obtained a commercial pilots licence) he started flying in 1994, with his first "gig in Ag in 1996".

Based in Northam and Tammin, Taurus Aviation operates most of the year in WA, but also during summer in the Eastern States.

He runs his farm and his aircraft businesses separately, although there were some crossovers.

"In the overall structure now on farm we have 11 employees, based in Tammin," Mr Jones said.

"Our pilots and ground crew are pretty much transient between east and west.

"Because of the nature of our seasons, compared with WA, there's very little summer work, unless you go work at fires, which some guys do.

"But most of the guys go back on the eastern seaboard in more intensive ag irrigation, which hasn't been that nice in the past few years."

Mr Jones said the pilots were "hired guns that have their own contacts" for work while they are outside WA.

"We build good relationships and have guys coming back from there," he said.

"When I first started flying it was pretty much a fixed base, we didn't move around, but by the end of my full-time flying career - before I went into business - we were really transient.

"We lived out of suitcases, which is fun when you are young, but not fun now."

Mr Jones said as a chief pilot he was still in the cockpit "a number of hours a year to retain currency".

"I really enjoy it as well," he said.

"It is nice to get back in occasionally.

"I did a fair bit earlier in the year.

"I kind of book-end the seasons. 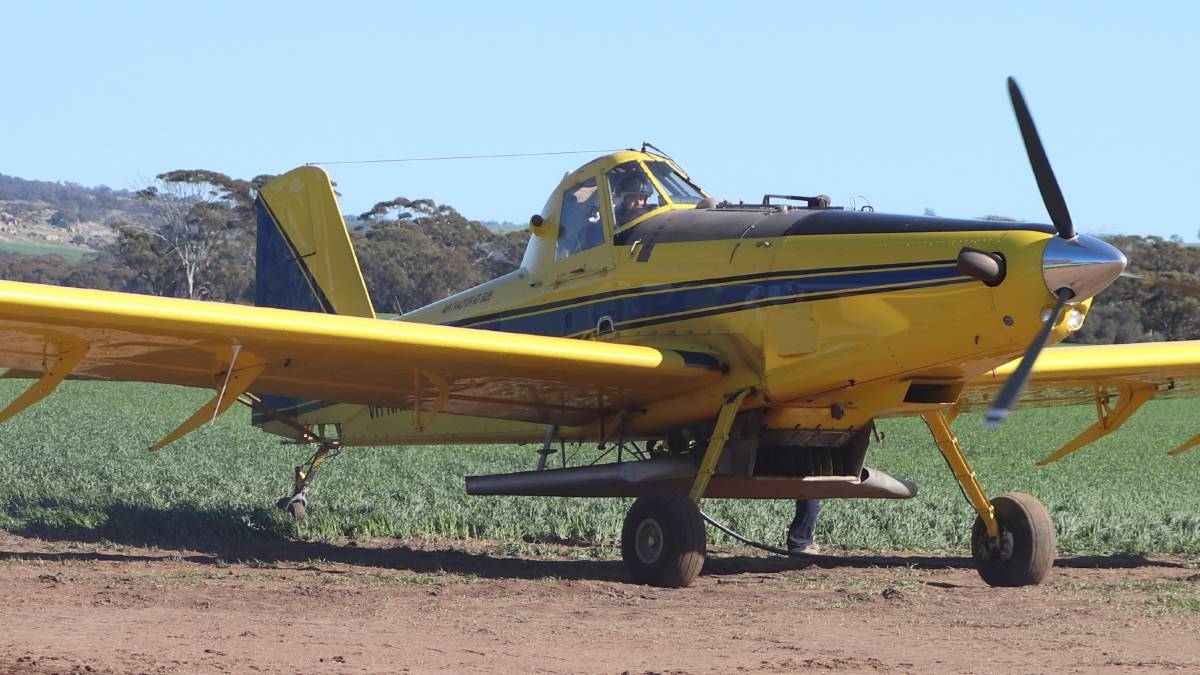 Contract pilot Nick Wyngaarden from Canterbury, NZ, based in Narrabri, NSW, ready to hit the sky again after refuelling.

"I'll do the beginning and the end of a season when the guys are moving back to their respective summer gigs."

Mr Jones said there was more to the job than what most people realised.

"A lot of pre-planning goes into operations - you don't just turn up and fly," he said.

"Even though it seems that way a lot.

"We take in as much detail as we can into an operation prior to being tasked.

"The more detail the better it will be because it just makes the job a) safer and b) easier for the outcomes to be better for all people involved."

The day Farm Weekly caught up with Mr Jones near York, he said he was up at 5am sending out emails to Pearce Airforce Base - because they were operating within its airspace.

"I had to get emails away to Pearce Airforce Base to give them where we would be operating.

"We give them 24 hours notice so they can plan their ops and we can plan ours with minimal disruption for both of us.

"It makes it safer for everyone as well."

Mr Jones said being a pilot was high risk.

"It is reasonably high risk - there are lots of things you can run into out there.

"So as much notification and planning as possible is needed.

"We can't get away from obstacles and things like birds and that but in terms of a pre-planning point of view as much notice as we've got enables us to look at what surrounding crops are.

"Even navigating to the job can be reasonably difficult sometimes - knowing which paddock it is."

Mr Jones said they worked off Google satellite imagery which could give them "a layout of what we are potentially going towards".

"It takes a fair bit of back office work to get to that point," he said.

Mr Jones is a survivor of a near-fatal crash in South Australia and said it was "one of the risks of what we do".

"It's a sad part of the game (having lost a few mates to the job) but we still enjoy what we do and turn up to fly everyday knowing that that risk is very real," he said.

"We are in dangerous ops but technology is enabling it to become much safer.

"Little things like being able to view a layout on Google before we go to it and plan our operation around it is a really good tool to have."

Back in 1998 that tool was unavailable.

Mr Jones grew up on a farm and seeing ag aircraft from an early age he "just loved it".

He took up flying knowing the risks and because "it is a high adrenaline job, because when it's on it is really on".

Mr Jones flew for 15 years as a commercial operator based in New South Wales and Queensland.

"I did a few seasons on the cotton farms at night and then I ended up creating a business over there," he said.

"I started a business in the Darling Downs, Queensland, and I came back to WA in 2006.

"I continued to have the business over there as well, in conjunction, so there was a fair bit of travel back and forth for my whole family.

"I sold the business in Queensland in 2012 to focus on my WA asset and then the opportunity came from a guy I used to work with in 2017. "We started negotiating and the changeover happened last year in March.

"When I sold my business in Queensland I always kept one aircraft and when I purchased the business I scaled back up again.

"It's a good bit of diversity for the whole business structure.

"Unfortunately if we are having a bad run on the farm we are generally having a poor season with the aircraft as well, but the beauty with the aircraft is they are highly moveable and in all the years I have been in business, and going back and forth between the east and the west, very rarely do you see two poor seasons consecutively - or two good seasons consecutively - so you end up moving your assets around a bit, subcontracting for work.

"In 2010 we had a really horrible season here but I had my best season ever over east - so it does add diversity to the whole business.

"It is good to have a very diverse set of businesses so you can transfer the skills from one to the other."

Mr Jones said his children enjoy flying but his wife was not convinced.

"My whole family, except my wife, really enjoy flying," he said.

"They all like going for a fly with dad but mum doesn't."

Mr Jones said his farm workers got on well with the pilots and sometimes they would work alongside them for a change from their usual routines.

Taurus Aviation has bases in Northam and Tammin with infrastructure such as an airstrip, hangars, accommodation and office at both locations.

"There's a bit of infrastructure involved but the good thing about the infrastructure on-farm is it can be used for other things as well," Mr Jones said.

"The name of the game is asset utilisation so therefore I like to see aeroplanes going east in the summer and work over there.

"We have all done that transcontinental flight.

Mr Jones said the journey east took about 14 hours in the air with "a few different places to stop in", such as Forrest, WA, Ceduna or Coober Pedy, SA.

He said the Air Tractors had Canadian built Pratton Whitney 750 horse powered engines, that could fly for 10 hours on one tank of fuel when set up for ferrying.

"You are ready to get out after that," he said.

The aircraft are designed for one person and while they can run on a mix of diesel and jet A1 (which is what jet airliners use) Mr Jones said they "occasionally run them on straight diesel".

"They have a very good, versatile and reliable engine."

For maintenance Taurus Aviation uses "a really good engineering firm in Northam that is only a few doors down from our place".

"Effectively it is a jet engine so we are limited to the engineers that are licensed on that particular engine, and the airframe. 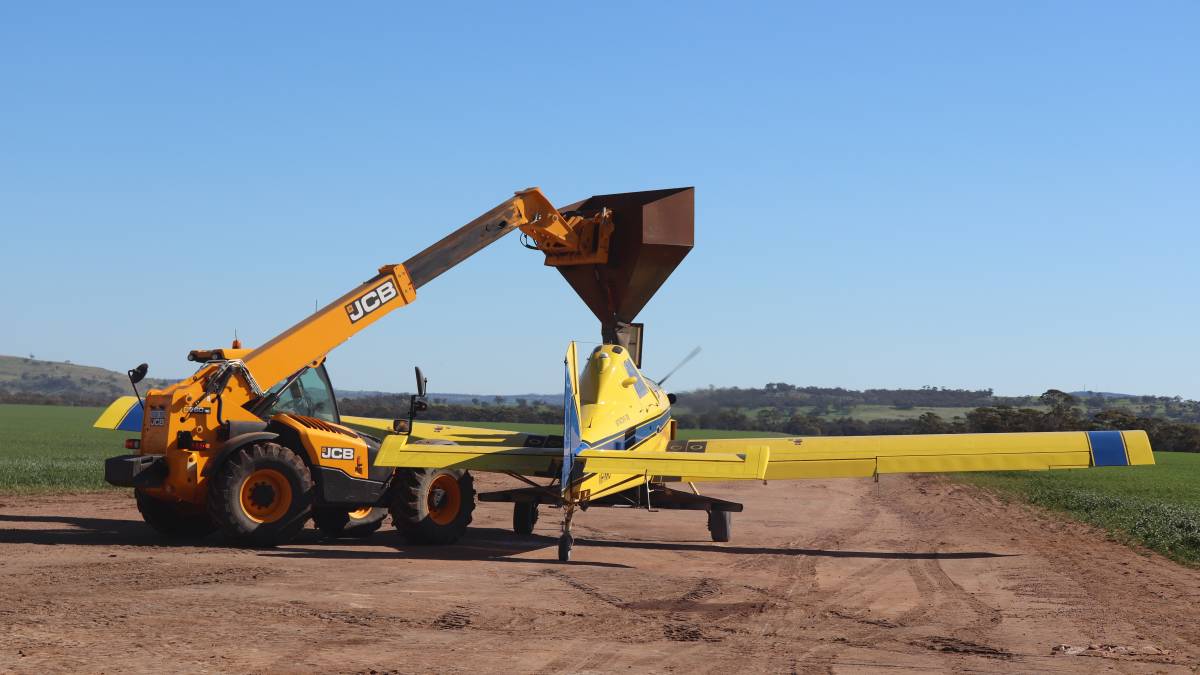 "It is just good to take it back to the same people because they understand how everything works."

Mr Jones said Taurus Aviation was an active member of the Aerial Agricultural Association of Australia and all its pilots were highly qualified and SpraySafe accredited.

"Our application operations include the spreading of urea, and all spraying applications by air," he said.

Mr Jones said they could still operate when it was raining, spreading fertiliser.

"Spraying ops are different," he said.

"But the objective with our fertiliser is to get it as close to a rainfall event as possible."