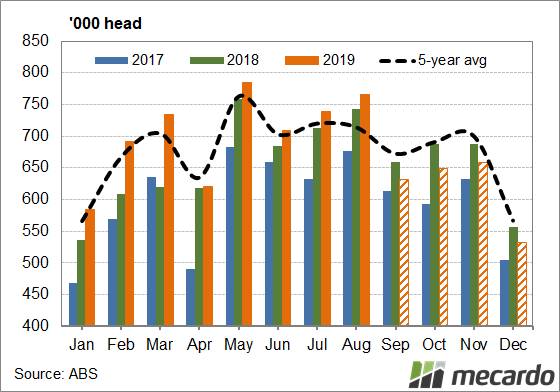 FIGURE 3: Australian monthly cattle slaughter. This chart shows how another 2.47 million head would be distributed under normal supply seasonality.

Projections for the 2019 cattle slaughter have been revised up writes Mecardo's Angus Brown.

PROJECTIONS for 2019 cattle slaughter have been revised up according to Meat and Livestock Australia's (MLA) most recent update.

There is always a delay in the writing of major projections and their release, which can sometimes make forecasts look a little off not long after they are released. During abnormally dry times and high slaughter levels, this can happen quickly.

With some improvement in seasonal conditions in the south, and a declining herd, another 4 million head for the second half of the year was a reasonable estimate.

Move on another two months and MLA's weekly slaughter statistics are suggesting July and August have seen around a further 1.5 million head of cattle exit the system. This leaves just 2.47 million head for the last four months of the year.

If it were to rain, national slaughter could easily hit the 8.1 million head number for 2019. Slaughter would be 4.6 per cent below the same time last year, but still 5.5pc above the levels of 2017.

The latest Bureau of Meteorology (BOM) doesn't fill us with much confidence around rainfall and tightening cattle supply, but we'll take a look at how prices might pan out.

If slaughter were to fall to the levels which will get us to 8.1 million head annual slaughter, very strong finished cattle prices could be expected. Most likely trade and heavy steers would be north of 600. Some southern over the hooks rates are there already.

What does this mean?

2019 cattle slaughter is likely to surpass the forecast of 8.1 million head. It would take stronger than normal seasonal tightening in supply to see slaughter match last year's levels, and this would still put annual slaughter at 8.2 million head.

This then means that there will be fewer cattle for slaughter in 2020 and a smaller herd, which is supportive of medium and longer term prices.