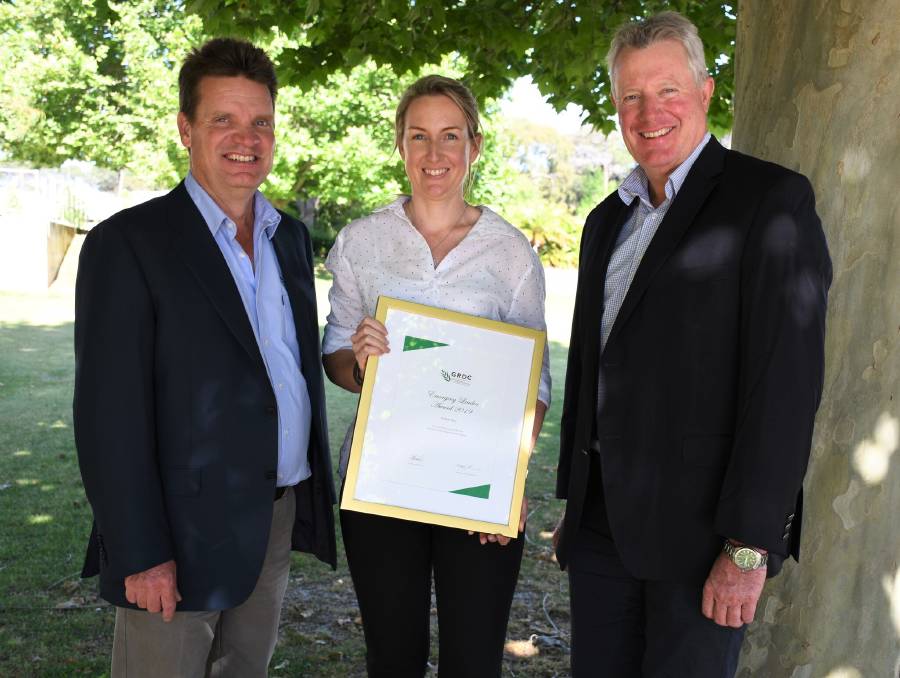 Mingenew-Irwin Group (MIG) chief executive officer Kathryn Fleay's dedication to working on behalf of grain growers and industry has been publicly recognised through a prestigious award.

MINGENEW-Irwin Group (MIG) chief executive officer Kathryn Fleay's dedication to working on behalf of grain growers and industry has been publicly recognised through a prestigious award.

She was officially presented with a 2019 Grains Research and Development Corporation (GRDC) Western Region Emerging Leader Award during a meeting of the GRDC Western Region Panel.

Panel chairman Darrin Lee presented the award, voted upon by the panel, to Ms Fleay, who has gathered extensive experience in the Western Australian grains industry since completing an Agribusiness degree in 2008.

"Kathryn has made the most of opportunities to develop her leadership skills and to connect with a broad range of people involved in Australian agriculture, as well as to inform grain growers and ensure they have a voice at an industry level," Mr Lee said.

"She has a passion for communicating information to growers in a way that is easy to understand, relevant and accessible and for encouraging sustainable farming through best practice management.

"Kathryn explores possibilities that are outside the square and is willing to try out new concepts and approaches that could benefit grain growers, especially in her local community."

After completing her degree with Curtin University, Ms Fleay was a research agronomist with MIG.

This was followed by time spent as an agronomist with Landmark at Mingenew and Geraldton before managing a broadacre farm in the Mingenew/Morawa area.

While managing the farm, Ms Fleay was a member of the GRDC's Geraldton port zone Regional Cropping Solutions Network (RCSN).

She took up her current position with MIG in 2017.

Ms Fleay used the financial scholarship component of her GRDC Emerging Leader Award to travel to Canada in July.

There she investigated on-farm research and extension initiatives and how these could potentially be applied in Australian broadacre cropping regions, especially where the local population is declining.

"There are many similarities between Canadian and Australian broadacre farming systems and this travel was a positive way to look at initiatives that could potentially have an impact in our industry - such as new ideas for running grower extension events and communication methods," Ms Fleay said.

"During my travels I was also keen to investigate how people, especially those in small agricultural communities, are bridging the city/country divide.

"Additionally, with the rise of 'ag tech', I wanted to see how Canadian technology and agricultural sectors work together."

Ms Fleay is committed to working in broadacre agriculture in the long-erm, which she said offered diverse and challenging roles.

"My vision is to help the grains industry to continually embrace change and to encourage the next generation of growers to remain excited and passionate about the continued growth of the industry," she said.