Sheep and goat producers in the Morawa area are ropeable after an 11 kilometre stretch of the State Barrier Fence (SBF) was removed by government funded contractors, leaving a gaping hole for wild dogs to run wild on their properties. 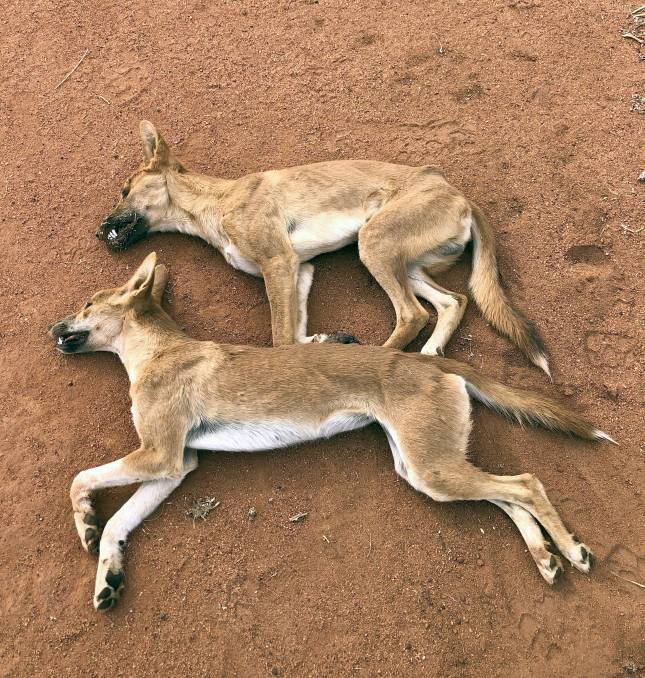 The Department of Primary Industries and Regional Development confirmed that an 11km section of fence south of Yalgoo was removed and not replaced for six days. Landowners are concerned how many dogs may have penetrated the area in that time.

SHEEP and goat producers in the Morawa area are ropeable after an 11 kilometre stretch of the State Barrier Fence (SBF) was removed by government funded contractors, leaving a gaping hole for wild dogs to run wild on their properties.

Central Wheatbelt Biosecurity Association (CWBA) chairman Ricky Storer said the group was first made aware of the removal of the fence on October 14, "when our contracted Licenced Pest Management Technician (LPMT) came across it".

"We are not sure how long prior but would imagine it will be down for at least another week before the contractors finish erecting the new section," Mr Storer said.

He said he didn't know for certain, but believed the fence was taken down due to a "miscommunication between the contractor and Department of Primary Industries and Regional Development (DPIRD)".

"This doesn't excuse it happening as we are aware that the contractor would understand that they would only remove as much fence (about 1km/day), as could be replaced the following day, or thereabouts.

"The impact will only be anecdotal and hearsay.

"The important thing is that the LPMT has removed 41 dogs from the area in recent times and whether its one dog or 20 dogs that have entered through the fence is impossible to tell but, potentially, all of that good work may be undone.

"It couldn't have happened at a worse possible time, as it is now that the cubs are leaving the den and becoming very active."

Mr Storer said the CWBA operated on a tight budget and if the LPMT's had to commit more time to the area in the future, it would be time that couldn't be spent in other areas.

In the short-term the local LPMT would be spending another five days working the area.

"His time will be spent monitoring and baiting and possibly setting some traps if he has them available," Mr Storer said.

"It would be safe to say that if there is an increase in stock attacks and losses in this area, there will be a fair amount of finger pointing."

Mr Storer said the CBWA would not be seeking compensation for losses because it is the landholders who would suffer that impact.

"We will however be asking for additional funding to compensate for the extra five days in the short-term but also want more assistance if the affect is long-term," he said.

"The really disappointing aspect to this is that DPIRD were aware of the fence having been removed before we did.

"I would have thought it would have been a courtesy to advise us and perhaps we could have put resources in place sooner and even set up some cameras and bag both sides of the fence to monitor any dogs coming through.

"What has to be remembered is that not only is the welfare of stock being put at risk, it's the livelihood of the landowners'.

"If it was an economic decision by the contractors to remove as much fencing as they did in one go, perhaps there needs to be some compensation from them."

A DPIRD spokesperson said confirmed that "in early October, an 11km section of fence south of Yalgoo was removed and was replaced within six days".

DPIRD acknowledged that this process "was not satisfactory and procedures have been put in place to ensure this does not happen again".

"DPIRD has contacted the neighbouring pastoralist who was not notified of this fence replacement," a spokesperson said.

"DPIRD makes every effort to notify property owners who share the State Barrier Fence (SBF) as a boundary."

The SBF contractors had been engaged to replace about 300km of the fence as part of the Wild Dog Action Plan.

To date 160km of fence has been replaced.

In this instance the contractors have not been named.

"During this replacement process, every effort is made to minimise the opportunity for wild dogs and emus to move beyond the fence line," the spokesperson said.

"For any uncompleted sections, operators will normally 'hang' the netting on posts each night, making a temporary exclusion buffer that animals cannot pass through."

The spokesperson said the CWBA had trapped "approximately 40 wild dogs in the past 12 months on the western side (inside) of the SBF".

"This new section of fence will significantly assist in keeping wild dogs on the outside and help reduce the impacts of wild dog attacks on farmers livestock.

"DPIRD is in the middle of major upgrades to the SBF, including the 300km of fence replacement, ongoing maintenance, track grading and spraying of vegetation along the fence reserve.

"The 1209km SBF is receiving much-needed major upgrades and is protecting WA grain and livestock farmers from wild dog and emu incursions."

Morawa sheep producer Glenn Tapscott said last week that he had had at least three dogs, one adult and two pups, on his property, which attacked eight ewes with three having to be put down.

He said he had just bought the ewes a few weeks before and it was a loss of $180 each.

"The SBF has been open for a week or two and the dogs are flowing through," Mr Tapscott said.

While searching for the dogs he came across their tracks in the dirt heading back into Crown land near ex Kadji Kadji station.

Mr Tapscott was concerned that all the hard work that had been done to control the pests had potentially "all gone out the window" because of the actions of the fencing contractors.

He said DPIRD needed to "check on" the contractors regularly to ensure the process was "policed".

"If one bitch comes through with pups, in no time you'll have 20 pups on the ground and we are back to square one," Mr Tapscott said.

He said one of his neighbours had completely sold his sheep because of the trauma of seeing them attacked by dogs, with little he could do to stop them.

Mr Tapscott said it has also cost him hundreds of thousands of dollars in losses because he "can't run sheep when I should be".

"The dogs are coming out of the Crown land and impacting on livestock producers," he said.

"Whatever the government is doing on their land it is just having a band-aid affect.

"They should be targeting these dogs all year round not just once a year."

Mr Tapscott said he had recently purchased $38,000 worth, or 12km, of dog fencing to install around the perimeter of the farm.

"It won't do the entire lot but it'll give us something to do from now until Christmas," he said.

"In four to five years we hope to block fence it all."

Mr Tapscott said building a cell fence around his property wouldn't solve the issue of wild dogs in the area, but force the dogs to skirt his property.

The Pastoralists and Graziers Association (PGA) of WA said the wild dog issue would be one of its most important areas of focus in the coming year and it would be pushing for government and industry to commit to "getting rid of the dogs whatever it takes".

"Wild dogs are a massive issue in agricultural areas and they are a landholder's responsibility," said PGA president Tony Seabrook.

"Everyone needs to totally commit to this or we will see them spread further south."

While the fight has been in areas near the SBF there have been reported sightings of wild dogs in the Badgingarra and Watheroo areas - highlighting the speed and distance at which they can spread.

Workshops on recognising the signs of wild dogs on farms have already been held in Moora and north of Gingin.