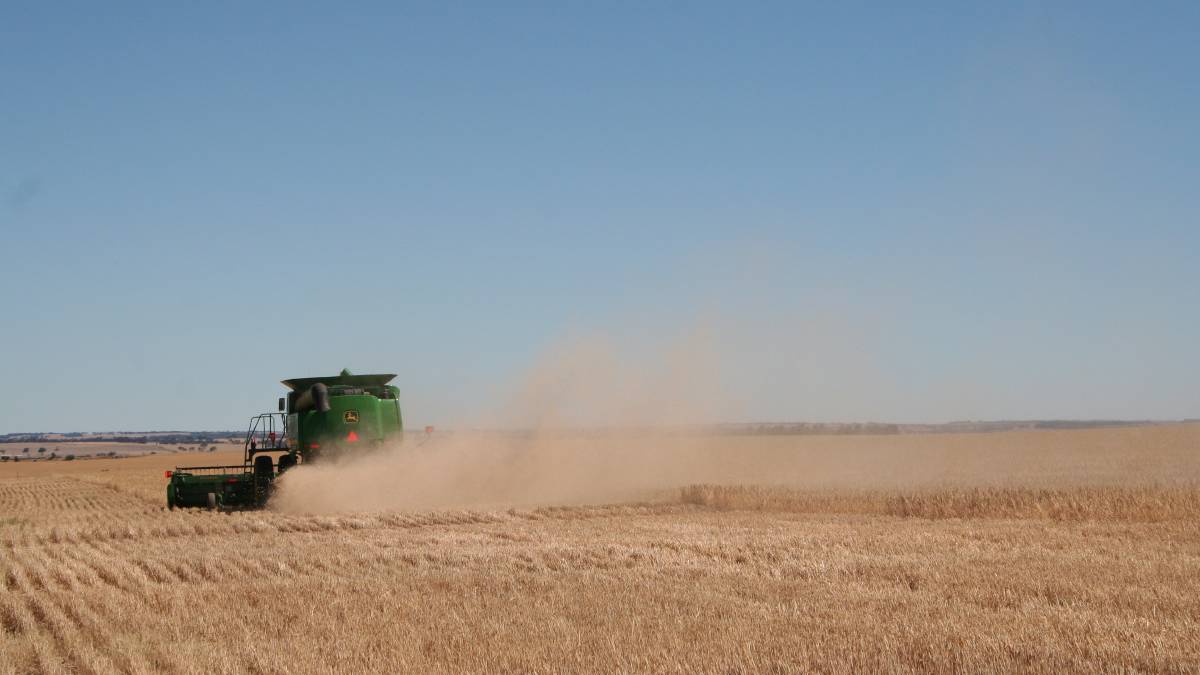 Harvest activity has picked up over the past week with more than 600,000 tonnes received across the CBH network.

HARVEST activity has picked up over the past week with more than 600,000 tonnes received across the CBH network.

The CBH Group said the majority of sites across its zones would be open by the end of this week as more farmers get into their harvest programs.

Given less than average rainfall across the growing season the co-operative is expecting a slightly below-average year.

"A late start to the season, coupled with a hot and dry spring has meant a hard finish for growers across the State," said CBH general manager operations Ben Macnamara.

"There is variability in yields with some areas seeing yields better than expected in spite of the lack of rain and the impact of frost in the southern regions," he said.

"Others are reporting below expected yields, it's a mixed bag at the moment.

"More than half of the tonnes delivered to the system have been barley, followed by wheat and canola.

"Due to the seasonal conditions we are seeing some early signs of variability in crop quality and have proactively sought to make available a range of off-grades for barley, oats and canola.

"These off-grades will be offered at sites where it makes sense to do so, with various factors taken into consideration by the team."

Mr Macnamara said growers could search the availability of segregations online through LoadNet Paddock Planner or by contacting their local area or zone manager for more information.

CBH has enhanced the way it manages chemical residues.

As with previous years, is requiring growers to declare chemical usage in the CDF app upon delivery.

"We manage chemical residues in order to protect access to international grain markets and maintain the excellent reputation and integrity of the Western Australian grain supply chain," Mr Macnamara said.

"Once again CBH is using technology to improve site performance and our grower's delivery experience.

"Improvements have been made to the CDF app to provide users with more options for how they receive notifications, how they communicate with farm employees and transporters and access more details of each load in real time."

The first load received was in the Geraldton zone on October 8 when 50t of canola was delivered to the Geraldton terminal from the Mullewa area, with most receivals so far being wheat and barley.

Yields are slightly lower than anticipated but quality has been good.

Harvest started in the Kwinana North zone with a load of barley delivered at Koorda on October 10.

Figures have been more evenly spread across sites than other zones with the majority delivered to McLevie, Kalannie and Merredin.

Barley makes up most receivals, at this early stage a higher percentage is going feed compared to previous years.

Wheat and canola receivals are expected to increase this week after rain, from 5-18 millimetres of rain halted harvest last week.

Harvest has begun with the eastern part of the Kwinana South zone leading the way with more than half of receivals for the zone in this area.

Majority of tonnes have been received at Kellerberrin, Tammin and Cunderdin.

Barley makes up most receivals, at this early stage and a higher percentage is going feed compared to previous years.

Canola and wheat samples are showing good quality at the moment.

There was an early start to harvest in the Albany zone with a load of canola received on October 10 at the Albany Terminal from a grower near Boxwood Hill.

Almost all sites are open with Gairdner receiving the majority of early deliveries for the zone, made up of mostly canola.

Canola quality has been good so far with snails less of an issue than expected.

Broomehill is expected to be open this week for canola deliveries.

Barley makes up most receivals, at this early stage with a higher percentage going feed compared to previous years.

All sites are open and receiving grain with the exception of Dunn Rock.

Receivals to date have been predominantly barley and canola, with one load of lentils delivered and a small amount of wheat.

Barley makes up most receivals, at this early stage a higher percentage is going feed compared to previous years.

Harvest was interrupted on Wednesday night by widespread rainfall, but there isn't expected to be significant delays to harvest as falls were relatively low.

Wheat prices last week firmed slightly up $5-6 per tonne to around the $330 per tonne free in store (FIS) Kwinana.

There has been limited grower selling to date with most growers waiting to see the quality.

The wheat that has been harvested is mixed, however at this stage, there is higher protein levels than the equivalent time last year.

International interest is better this year with WA prices equivalent to export parity as the east coast demand remains quiet going into the harvest.

Feed barley prices during the week continued to soften falling over $10/t to the $320/t FIS Kwinana levels by the end of the week.

This is a direct result of a lack of east coast demand for WA feed barley with a good Victorian barley crop expected to fulfil the demand from northern New South Wales and southern Queensland.

Internationally there is limited demand to date with the impending Chinese anti-dumping investigation decision due on November 19 and Thailand's recent announcement on the banning of glyphosate weighing on the Australian market.

In WA CBH has been segregating feed barley based on chemical declarations for several years to maintain markets.

Malt barley market is in a holding pattern awaiting the outcome of the Chinese anti-dumping investigation.

It is anticipated that malting selection rates could be down as the very difficult end to the season is resulting in higher screenings.

The canola market has not significantly changed during the week with values at $615-620/t FIS Kwinana.

Interest is predominantly European and the market is focused on this business.

With a projected small crop, exports will naturally be very limited this season.

Interest from key markets is being seen and the domestic mills are looking to cover some of their requirements.

This season demand from the east coast is not expected with the Victorian oat crop looking good.

But competition is being seen from South American, Canadian and European oats which is likely to cap the upside on oats, despite a smaller crop expected in WA.