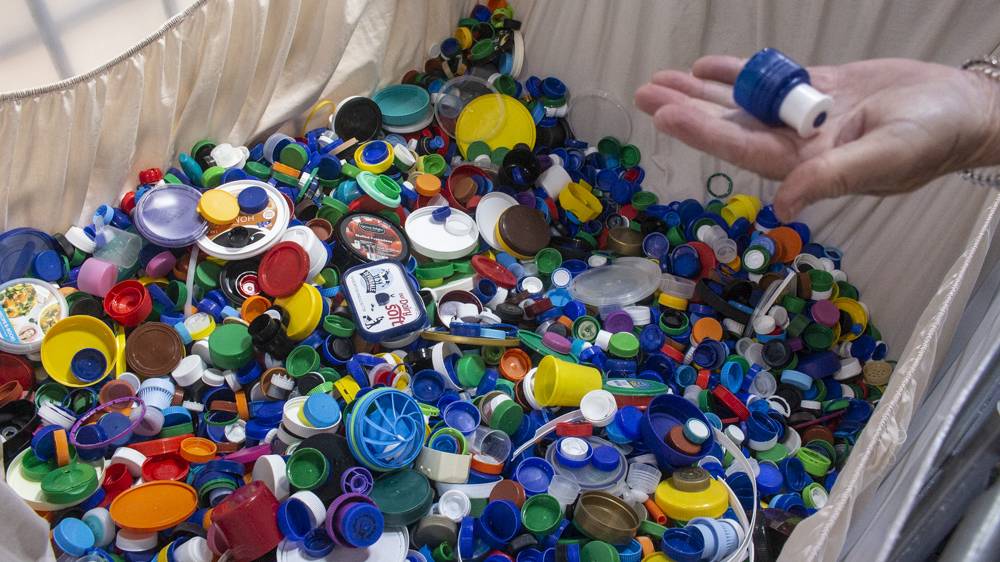 Plastic bottle tops and lids are too small to be processed in industrial recycling plants, making them destined for landfill.

Recycling in a variety of ways to help save the planet has become a major global focus in recent years.

Recycling in a variety of ways to help save the planet has become a major global focus in recent years.

The phasing out of plastic, single-use shopping bags by major supermarkets has been a headline grabber, as has the introduction of the three-bin garbage collection by councils - household waste in the red bin, recycling in the yellow and garden trimmings in the green.

When it comes to determining which of our household waste can be recycled, plastic bottles from milk and orange juice, for example, are destined for the yellow bins.

But what many of us may not realise is that we may not be helping the planet as much as we think we are.

If we leave the lids on top of the bottles, they are considered contaminated and in fact cannot be processed, meaning they end up in landfill after all.

The lids are washed and hand sorted into their respective grades of plastic, before being shredded.

This is sure to come as a surprise to many of us who thought we were doing the right thing by the environment and popping the bottles, lids and all, in our recycling bins.

According to Precious Plastic Margaret River founder Narelle Kuppers, while the lids are indeed made of hard plastic, they are too small and simply fall down to the bottom of the industrial machines at the recycling plants.

But the desire of Ms Kuppers and husband Stijn to repurpose the lids has resulted in them starting up a not-for-profit business in the South West town of Cowaramup.

They have joined the Precious Plastic movement, which is a global community of more than 40,000 people committed to finding a solution for plastic pollution.

It was started in the Netherlands in 2013 by Dave Hakkens, who put the blueprints of simple plastic recycling machines online and made them freely available in an effort to encourage people to make the world a better place.

For the Kuppers, their decision to join the movement came after a trip to Exmouth last year, where the pristine marine environment was juxtaposed with the scourge of plastic waste.

"Stijn and I are both surfers and we took our four-year-old son to stay at a caravan park in Exmouth last year," Ms Kuppers said.

"We'd spend all day out on the water amongst whales, turtles and dolphins and then when we'd get back to the campsite, there weren't any recycling bins and the rubbish would be overflowing from the bins because of no one wanting to take responsibility for their waste. 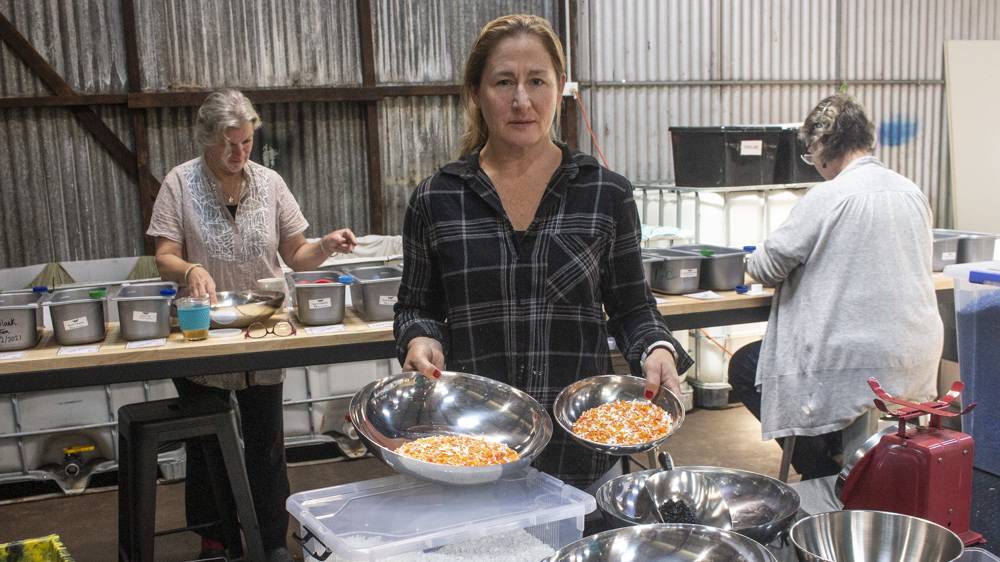 Precious Plastic Margaret River founder Narelle Kuppers said sorting the lids into different grades of plastic was the most labour intensive part of the recycling process.

"I was a former fly-in, fly-out worker while Stijn still works in the industry and we'd been looking for a small business opportunity for me when our son started school.

"We'd heard about the Precious Plastics project and seeing this beautiful environment being affected by rubbish was when we had our moment and said right, let's do this."

So the Margaret River residents set about starting up their own branch from home, focusing on the collection and recycling of plastic lids, which were easy to store and clean.

Ms Kuppers said they put advertisements in the local community pages to let people know they were collecting the lids and they were thrilled with how quickly people came onboard.

They also went to local markets to spread the word and sold items to replace single-use plastic in order to fund their business.

Such was the response, after 12 months of working from their backyard, they collected 300 kilograms of lids - which at two grams each makes for a lot of lids. 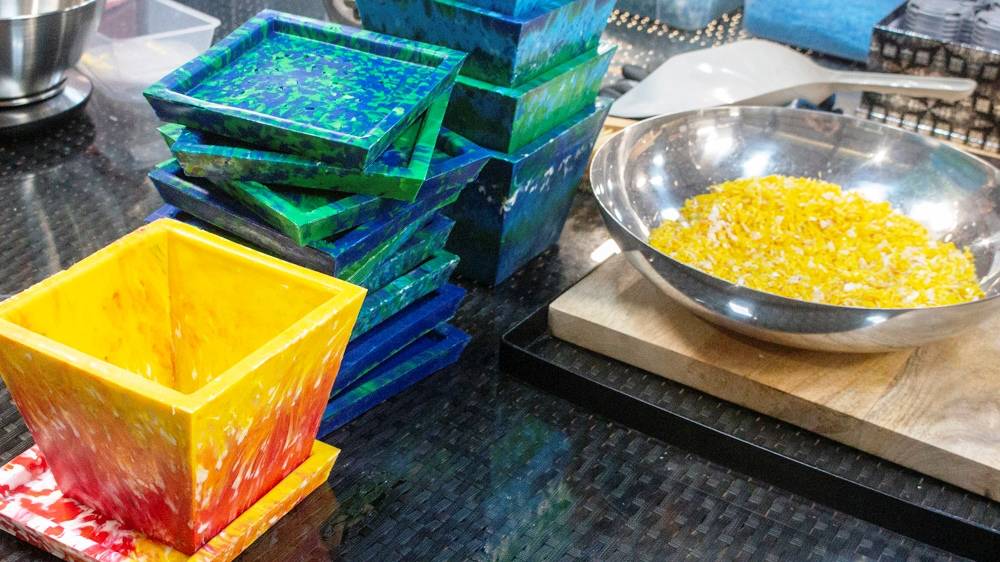 Precious Plastic Margaret River is making strikingly colourful products, including a pot plant and saucer, from the shredded plastic lids.

They also got to the point that their house was full of plastic and needed to look for a new base.

That came in the form of a shed on Bussell Highway in Cowaramup, which they have leased for the next two years and was generously decked out with furniture donated by the local Lions club.

Ms Kuppers said the business received a big boost in the form of a $60,000 grant from the WA Waste Authority, which had allowed them to build a 3D printer, injection machine, mould machine and buy an industrial shredder and two industrial ovens.

So far, they have used the brightly coloured recycled plastic to make a small tapas bowl, a hexagonal bowl and a pot plant and saucer in the compression oven.

These have then been sold at markets, school festivals and local shows at prices ranging from $15-$30 and have been really well received.

But Ms Kuppers said recent publicity had seen an explosion in demand for their products from customers worldwide.

"We went from 1000 followers to 10,000 on our Facebook page in just two weeks, the interest has been overwhelming," Ms Kuppers said.

"It went global, we've had heaps of people trying to get hold of our products from the United States and the United Kingdom and we've sent lots to the Eastern States.

"We're also in the process of setting up an online shop and have been taking orders through our Facebook page."

Ms Kuppers said they'd decided to focus on the plastic lids because they couldn't be recycled and were therefore otherwise destined for landfill.

"They're easy to store and wash and sort and shred and if you look at them in a different way, they come in the most beautiful colours and the plastic they're made from is amazing," she said.

As well as coming in all different sizes, the bottle lids were also made from different types of plastic, which made the sorting the most labour intensive part of the processing.

Ms Kuppers said the lids were firstly sorted before being washed in a washing machine, dried and then sorted again.

"The sorting is quite critical, because about 60 per cent of lids aren't marked with a number on them, so we have to work out what type of plastic they're made of," she said.

"For example, a number 2 plastic can't be put with a number 5 lid, because different plastics don't bond together."

Previously friends had helped them to sort the lids, but they had now extended the invitation to volunteers who may like to participate.

"We've also been holding some school tours, with the basic focus of bringing kids in and teaching them about contamination in recycling," Ms Kuppers said.

"We can show them that there is someone at the end of the line that has to touch the rubbish, so they can go home and know how contamination by leaving lids on bottles can decrease the likelihood of that bottle being recycled."

For the Kuppers, their main focus was to raise awareness and education about recycling lids and hoped they may one day be able to conduct workshops about recycling plastic.

"Down the track we hope we may be able to make a living out of it, but if not we live in an amazing community who I'm sure will come and help out here and hang out and sort and make things," Ms Kuppers said.

When Ripe spoke to Narelle, Stijn was busily welding new moulds for two new products - a dog bowl and a plant pot.

They have many ideas for a range of products and the injection machine would allow them to make much more refined products, such as an iPhone case.

Precious Plastics Margaret River has drop-off locations throughout the South West from Augusta up to Bunbury, details of which are on their Facebook page and also has a collection point in Exmouth, where it all started.

Ms Kuppers said they relied on people from those towns dropping the lids off to them at Cowaramup when they were travelling through - they had a bin at the front of the shed where lids could be dropped off anytime.

For anyone wishing to collect lids for their business, Ms Kuppers said it would be most helpful if any foam inserts inside the lid could be removed and the lids given a rinse.

"There's no point sorting them into colours or anything like that, because we have to sort them two or three times anyway," she said.

The movement also had a Perth-based group, which was where Ms Kuppers directed people living in or near the metropolitan area to take their lids to.

A recent offer of free solar panels for the shed from a South Australian company had given Ms Kuppers another boost in confidence that they were doing something that people regarded as being important.

"Dave Hakkens (international designer and innovator) said if you want to get rich, you go and work for Apple, but if you want to do the right thing, you do something like this," she said.

"The sorting takes a long time and it's not something you're necessarily going to get rich from, but it has been an amazing ride right from the start."