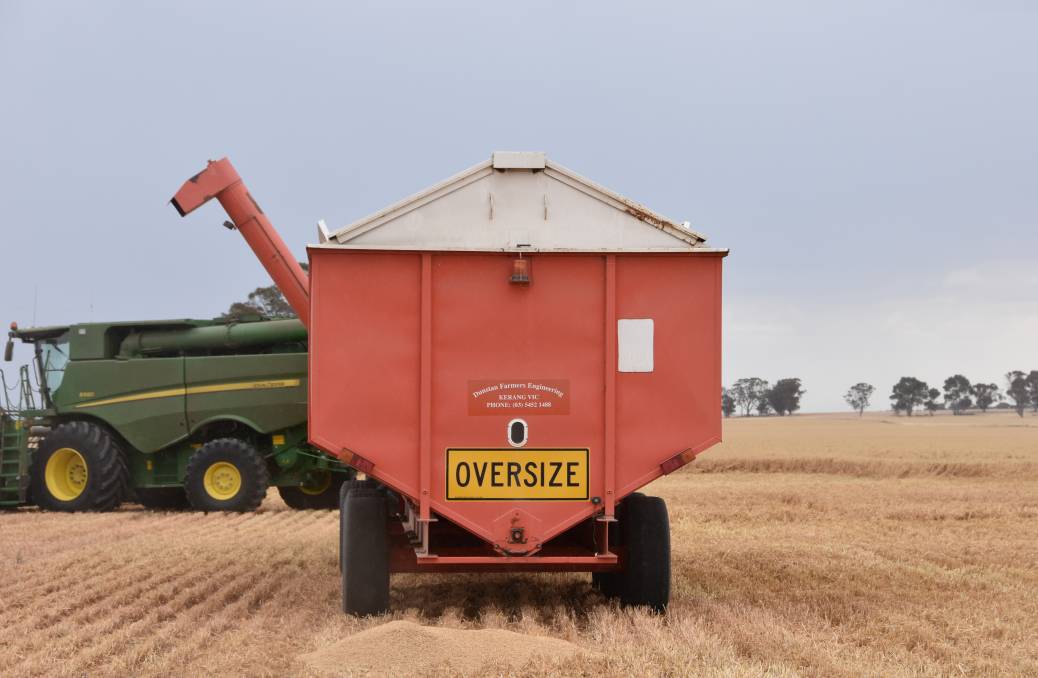 In spite of unseasonably cold conditions with plenty of wind and some showers the all-important Victorian harvest is slowly pick up pace.

The trade is unwilling to own large volumes of grain and farmers are unwilling sellers at current values, leading to a stalemate.

THERE has been a slow start to harvest in terms of grain trading, with farmers unwilling sellers at current values and the trade wanting to assess total volumes and distribution of grain before taking a firm position.

Lloyd George, Ag Scientia, said the current situation was virtually the opposite of the same time last year.

"Last year there was a rush on for the trade to own grain as they were concerned about ongoing availability of supplies and that backfired with prices declining through the front half of the year," Mr George said.

"This year things are a lot more circumspect on the cereals front, the prices that are out there are not attracting too much attention from farmers but the trade is unwilling to push higher."

With farmers willing sellers of canola, with prices pushing $600 a tonne and reasonable values on offer in pulse crops such as lentils and faba beans growers are satisfying cash flow requirements via these crops and storing cereals to market later.

Wheat prices at port range from $310/t in South Australia to $330/t in the Geelong port zone in Victoria to $345/t in the Kwinana zone in WA.

Concerns about barley being shaken from the head during the strong winds over the past week has seen barley values kick $10/t in Victoria this week.

"There is a bit of short covering for immediate delivery but we expect prices to ease a little once the supplies from WA, SA and Victoria make their way here."

Freight considerations are complicating pricing, especially in places like Victoria is the fact the port price is not necessarily the strongest bid.

Buyers are looking to accumulate grain for use in the domestic market, in particular in NSW via northern and central Victorian sites, creating what is effectively an inverse in traditional pricing, where the normal export focus means lower prices in the north and higher prices closer to port.

Mr George was sceptical whether the domestic demand would be sufficient to chew through what he described as a good Victorian crop in particular.

"Barley yields have really been exceptional from what I have head and while wheat will not be as good there will be plenty about.

"I would imagine Victoria is going to have to export around a million tonnes of wheat.

"The big domestic end users in the Darling Downs are finding it more efficient to bring in grain from WA and SA via boat than road Victorian grain up, so you only really have the NSW and Victorian markets to focus on.

"Demand is likely to be back a bit as those farmer buyers, buying in feed grain to keep a core flock or herd going have just about run out of cash," Mr George said.

"There's no doubt the domestic market will still be very strong at times but it is going to be back on last year."

"The price we are paying here is one of the highest in the world so we imagine people will look to get grain into our market."

As a counterpoint to Mr George's views regarding S&D Mr Walker said there was still a large amount of inelastic demand from the region.

"Processors are still making a quid, the feedlots will still be looking for grain."

In regards to pricing, not all believe there is downside risk to current values.

Another grains industry insider said he felt there was still room for some upside once harvest pressure came off the market in the new year.

He said South Australia loomed as a surprise packet, saying people had overestimated the amount of grain to be produced in the crucial Mid North corridor where it could be freighted effectively by overland rail to northern NSW and Queensland.

The source also pointed to the fact the supply and demand equation would be hit by the dearth of any meaningful tonnage of summer crop, which usually supplements winter cereals into northern markets.

There has virtually been no sorghum plantings in the first planting window and very few areas have anywhere near the soil moisture profile required to contemplate a late sorghum plant, especially with Bureau of Meteorology (BOM) outlooks for a very dry December throughout the northern cropping zone.

ABARES this week pegged the summer crop plant at a 26 year low.