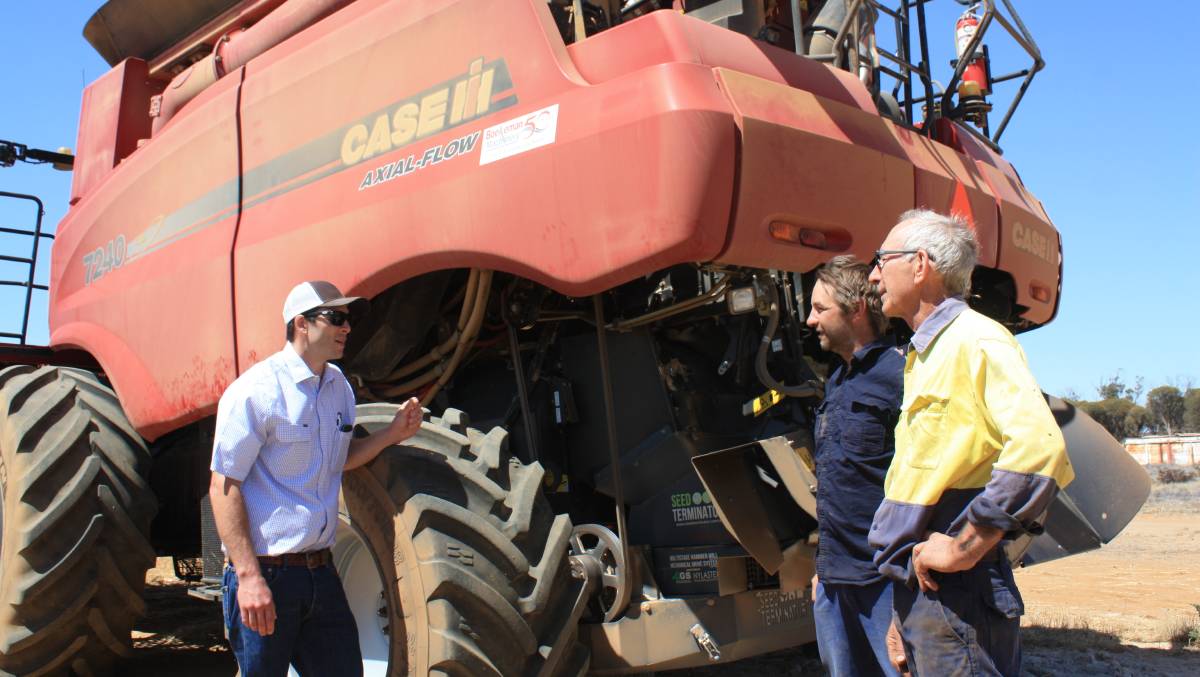 WA Seed Terminator representative Joe Limbaugh (left), chats with east Wubin farmers Boyd and Keith Carter about the performance of the Seed Terminator on this Case IH 7240. The Carters also have another unit installed in their John Deere S680 header.

South Australian-based Seed Terminator has established itself in the Western Australian market with more than 100 units in operation.

SOUTH Australian-based Seed Terminator has established itself in the Western Australian market with more than 100 units in operation.

According to the company's WA representative Joe Limbaugh, the Seed Terminators incorporate a 100 per cent mechanical drive system, that is a driven by the harvester engine, with minimal moving parts, incorporating only shafts, belts and a gearbox.

"The three-stage hammer mill gives you the reassurance of a 98pc kill no matter the moisture level or mill speeds between 2500 and 3000rpm," Mr Limbaugh said.

"The mill set will totally devitalise volunteers at 1500rpm whereas other mills have to operate at 3000rpm to achieve the same result.

"And the Seed Terminator has the ability to spread the chaff fraction the full-cut width, improving potassium value in the soil, which can be worth between four and five dollars a tonne of grain, dependent on the crop type."

"We're on the edge of resistant weeds and we want to put as much pressure as we can on weed seed burdens," Boyd Carter said.

"The terminators are new tools in the toolbox and we're hopeful they can help us achieve a reduction in weed populations without burning.

"We've also got sheep and we've had chaff carts in the past, so the terminators will be an extra hammer on the weeds."

"We no longer burn windrows so we can leave the trash and spread it like fertiliser," he said.

As far as power draw is concerned Boyd Carter said it was similar to pulling a chaff cart.

"What surprised us a bit was the good wear on the mills," he said. 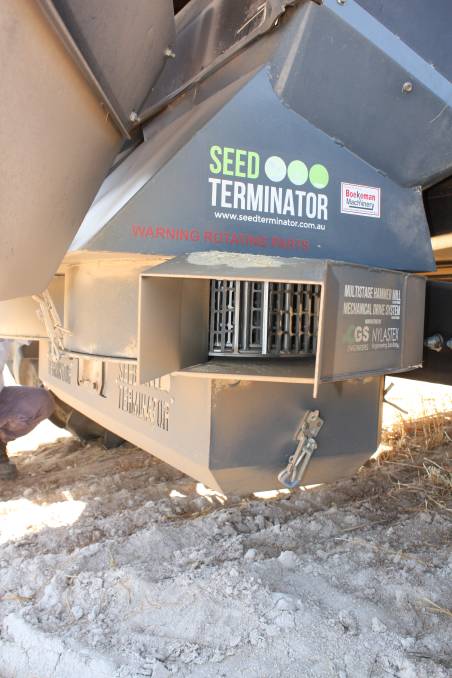 A close-up of the new mill in the Seed Terminator which the company says reduces power by 25 per cent.

"It was better than what we expected."

A nuance of using the Seed Terminator was the importance of setting up the headers.

"You've got to keep as little straw as possible going over the sieves to keep it out of the terminator," Boyd said.

"You know when you're not doing a good job because the terminator lets you know if there's too much straw going into it.

"It can be a trap for inexperienced drivers."

According to Mr Limbaugh a big part of the company's focus in WA is to stay connected with the market by speaking with owners and dealers about the product line and how it fits in with harvest operations.

"The company is in a continued mode of receiving feedback from owners to improve wear and reduce power requirements," he said.

"From a weed kill viewpoint, measurements in WA are at 98pc and we've just received kill test results for the Seed Terminators working in Europe, with a mid-90pc kill rate for European black grass, which is a predominant problem, much like our ryegrass, but much harder to fully kill.

"This is exciting for all parties involved from the potential customer base as well as Zurn Harvesting which is marketing the product throughout the European countries as well as the CIS and Russia."

"That means farmers have terminated 4.296 billion weed seeds," he said.

"We're now honing in on our cost per hectare and that is being achieved by cost efficient production.

"For example, we've lowered the cost of a set of new screens by $2300 while making them, 60 per cent thicker.

"This is due to sourcing locally manufactured steel in conjunction with changing our methods of manufacturing.

"The refinements we have made to the system are showing less power draw and longer-wearing mill components, equalling lower cost of both ownership and operation."

"Another interesting statistic is that 80pc of the harvest weeds are captured by the combine harvester," he said.

"We need to stop the combine harvesters unintended role as a weed seeder and stop the spread of weeds.

"We need to think about capturing and destroying the weed seeds as we harvest, rather than spreading them 300 metres down the paddock."