Following the Esperance fire which killed their father and burnt all but 600 hectares of their 2800ha family farm, twins Tom and Riley Curnow worked with their uncle Daren Curnow to get the farm up and running.

At just 18-years-old Tom Curnow took on more responsibility than most people would take on in a lifetime.

AT just 18-years-old Tom Curnow took on more responsibility than most people would take on in a lifetime.

Not only was he dealing with the loss of his father Kym (Freddy) Curnow in the devastating Esperance bushfires, he was faced with taking over the family farm with twin brother Riley, to continue his father's legacy in the Scaddan community.

Whether authorities could have done more, a question that has lingered in the minds of the families left behind, is still a hot topic almost four years later in a bushfire coroner's report which made 12 recommendations last week.

Described as the fastest-moving fire ever recorded in Western Australia in a coronial inquest in March this year, Freddy had been trying to warn neighbours when his car ran off the road into the firestorm.

The three farm workers who perished had been trying to escape the fire when their car crashed into a tree.

The fire, which spread across 300,000 hectares of agricultural land on the State's south coast, destroyed 30,000ha of crops and killed 4500 head of livestock.

Coroner Sarah Linton's recommendations included that funding should be given to a Wheatbelt-based water bomber for the full fire season and that a career Fire and Service Station should be set up to service the Esperance-Ravensthorpe community.

"I think the authorities probably could have done more, but that's hindsight isn't it?" Tom told Farm Weekly last week.

"No one expects events like this to happen and we definitely weren't prepared."

Tom said he hoped some changes would come from the points released in the coroner's report.

"I think water bombers should be more accessible and readily available for our local area due to our isolation and we should be able to use our local resources who are very capable," Tom said.

"No one wants to go and put fire breaks in, it costs money and it's not a fun job, but it's necessary and farmers know that, so they should be able to make the call."

Four years on, with Tom's strength and maturity well beyond his years, you'd be forgiven for thinking that he is much older than 22.

"There was no pressure for me to stay on the farm, we probably would have just leased it out," Tom said. 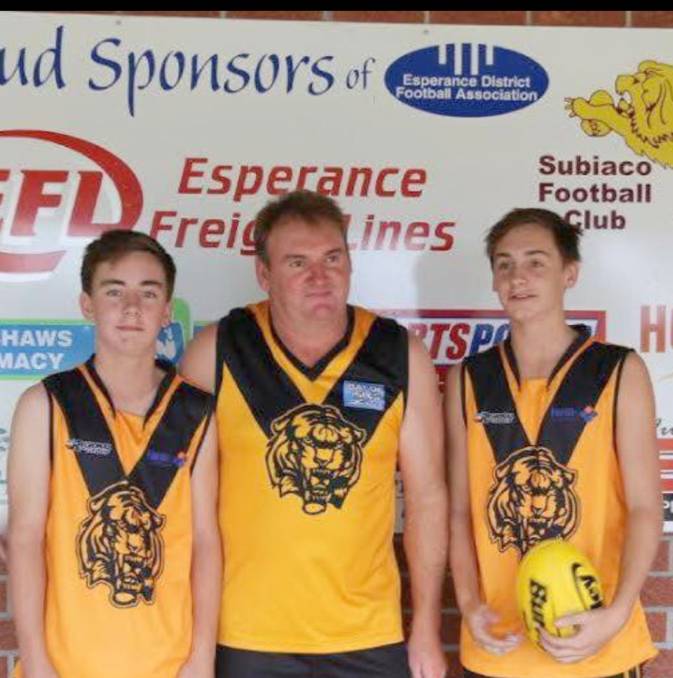 Tom Curnow (left), their dad Freddy Curnow and his twin Riley shared a moment for this photograph taken during a past footy season.

"But after the fire, Riley and I decided we would stay for at least a year because it was the right thing to do - and what we wanted - and then take it from there."

With the help of their uncle Daren Curnow, who had previously farmed with their father and their cousin Daniel, the boys got the farm back on its feet and continued to work the land Freddy loved.

"The first year after the fires was a bit of a shit show really," Tom said.

"It was basically just get the crop in and spray what we needed to spray."

With all but 600ha of the 2800ha farm burnt, the boys harvested the only barley crop left after the fire and Daniel came up with the idea to turn it into a beer to honour Freddy.

"Dad had already harvested one paddock and the other block we harvested towards New Year's Eve," Tom said.

"Most of the beer is gone now, but there's still a few cartons lying around."

Daren and Freddy farmed apart for the first time ever in 2015, but after the fire, Daren merged his farm with Freddy's and helped his nephews run their half of the operation for three years.

In their first year Riley and Tom figured out who was better at doing what jobs, with Riley better at the physical labour side of things and Tom better at the book work.

"I suppose I'm a bit more organised so it made sense for us to take charge in different areas, although we still shared most of the jobs," Tom said.

"Daren and Daniel were more experienced, so one of them would come over and help us and one of us would go over and help them, so there was enough skill spread across both properties."

After a year of working the farm, Riley decided he wanted to go to Perth to study for an agribusiness degree, while Tom opted to stay back.

To keep his options open after school, Tom had completed his ATAR education at the Western Australian College of Agriculture, Cunderdin and before the fire, had signed up to study for an agribusiness degree at Curtin University.

"I wasn't too sure what I wanted to do at that time, I had applied for the navy as well, so that was just another option I was considering," Tom said.

"An apprenticeship didn't really interest me because I knew I wanted to farm either then or eventually, so I just didn't see the point.

"I think I probably would have ended up in Perth trying university, but I don't know if I would have lasted anyway."

With an offer from Daren to look after the farm, Tom said his biggest motivation in staying back was to keep his dad's legacy and family name in the community.

With both brothers throwing themselves into the farm following their dad's passing, Tom said it probably helped them connect with their father by being where he was all the time.

"I've never truly dealt with it I don't think, so it might come and bite me on the arse one day, but working on the farm has definitely helped me accept the fact that this is how it is now," Tom said.

With 2016 and 2017 the best years the farm has ever had in terms of yields, Tom quickly got the hang of things and gradually took on more responsibility for the business.

"Last year I was doing the books and Daren and I were basically just doing seeding and harvest together," Tom said.

"But this is the first year I've really taken the reins, as I've done seeding and harvest without Daren.

"It was pretty daunting at the start, but once we got into it, it was alright."

With help available from Daren and another farm worker, Tom said he still called his uncle most days to ask him questions.

"Even before the fires, we were really close to Uncle Daren and Aunty Kel," Tom said.

"They were like our second parents and Daren is pretty much just like our dad now, I rely on him a lot.

"Even if I don't talk to him for a while, he will always ring just to say g'day and keep us in line.

"He looks out for us, guiding us on the things our dad would have."

With Scaddan a tight-knit community, the Curnow family has felt its support since the 2015 fire.

"The first year straight after the fire, we didn't even talk to anyone and we saw the neighbours seeder bar out in the paddock," Tom said.

"We didn't ask, they just knew it was the right thing to do."

Following the fire, friends and strangers cleaned up the family's property, so that when the boys returned to work they could just turn the key on the tractor and go.

Tom said the past few years had been a trying time for his family, with the running of the farm made harder due to the family being apart in Perth and in Esperance, and everyone growing up and doing their own thing.

The family is now in the process of restructuring the business so that the siblings, Tom, Riley and their younger sister Emma, will all have the opportunity to farm in the future.

"Mum supports us in our endeavours to farm," Tom said.

Going forward, Riley plans to return home to help Tom run the farm and the brothers are looking to expand their operations.

"We aren't really big enough for two, so we'd like to get a bit more skin in the game and buy more land anywhere in the Esperance district really," Tom said.

With Scaddan a particularly expensive area to buy land in, due to its high rainfall and high reliability for farms, Tom said they had also looked at places in Mt Madden and Gardner, north of Albany.

"That sense of ownership, in getting a bit more land, doing the hard work on it, ripping fences out and cleaning trees up is what we're after," Tom said.

"We've done a bit of work on our existing property, but it was pretty well set up when we got there, so it'll be nice to see something through from its beginning stages."

With their farm, which crops wheat, barley, canola and field peas, hit by two frost events this year, they had a well below-average season.

"We had two nights where it was down around minus four to five degrees for probably more than 12 hours, so that was what stuffed us really," Tom said.

"Our barley averaged at 1.8-2 tonnes per hectare, the peas are about 1t/ha, the canola was about 450 kilograms and the wheat averaged between 400-600kg, so the wheat pretty much got smoked."

As a result of the frost and a dry start and finish, the farm had a very short season compared to normal, with seeding finished in mid-May and harvest completed on November 20.

"Last year was quite an extended season because we got August rain and finished on December 15," Tom said.

"Riley and I were used to seeing ripper crops, so this year was a bit of a shock."

But not one to complain about any of his circumstances, Tom said they are lucky to live where they do.

Having recently been made vice president of the Scaddan Bushfire Brigade and his uncle Daren treasurer, there are a handful of fires every year in the district, with many sparked by lightning on hot days hitting the surrounding bushland.

"That was how the fire started four years ago, out in the bush and then it came to the farmland, so everyone is paranoid about it now, which is good because it means we all stay on top of it," Tom said.

"A truck and a couple of crew members from each brigade go out for 2-4 weeks and follow the graders around and put extensive breaks around them to stop the fires."

Tom said the first fire he went to following his father's passing was a bit confronting, but he didn't mind going to them now.

"When I go I still think about dad a bit, but it's good to just catch up with everyone at the end and know that you've helped them out," Tom said.

"You know if you have one on your farm everyone will come and give you a hand too."